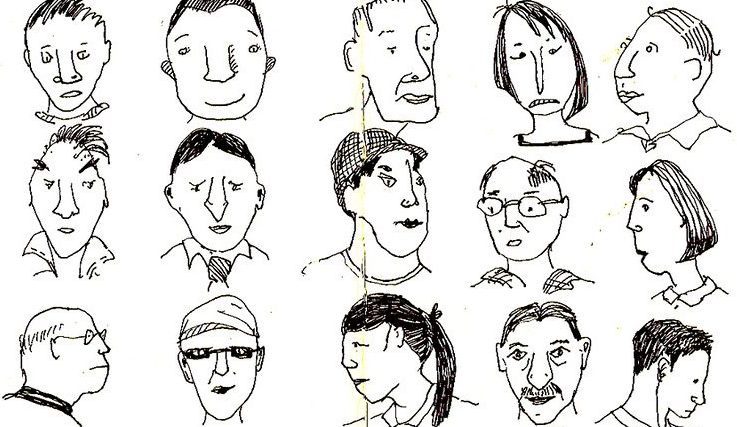 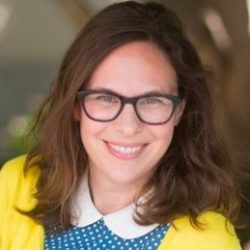 What happened to the “lost art of shutting up”? Once upon a time—Neil Genzlinger lamented (pearls firmly clutched)—you actually had to have done something to write a memoir. And that something had to be worth reading about. In today’s carefully curated oversharing era, everyone seems to think they have a story worth telling, and everyone, based on the proliferation of memoirs, seems to think others will care. And everyone, Genzlinger insisted, is almost always wrong.

In the case of Sarah Ruhl—whose memoir, Smile, was released in October—it is Genzlinger who could not be more wrong. Prize-winning playwright Ruhl’s book focuses on her long and frustrating battle with a rare and persistent form of Bell’s palsy that left half of her face paralyzed. It’s a stirring and metaphoric narrative that exposes Ruhl’s life and journey. But it also reveals the role of the face, and especially the smile, in creating and easing relationships and connecting to the humanity of others. It’s a something. There is not a doubt that, even by Genzlinger’s rigid criteria, it’s a something.

The bulk of the memoir is the story of navigating life: as a mother of three; a playwright; a wife; a bereaved friend; a daughter; a patient working with practitioners both good and bad, empathetic and dismissive, humble and arrogant; a person who dreams at night of smiling; a person without the ability to smile.

A woman without the ability to smile. Not being able to smile as a woman, Ruhl reminds us again and again, is a particular challenge in this world, where women are always being exhorted to smile more, but not being able to smile is hard for anyone in ways both big and little. It’s the kind of thing you don’t really appreciate until it’s gone.

The setup to Smile is powerfully theatrical: Ruhl’s first play was opening on Broadway, and she was uncomfortably (and happily, and unexpectedly) pregnant with twins. Having sat through rehearsals with an increasingly awkward body, Ruhl had spent some time thinking about having to navigate the world in new ways due to somatic dictates.

And then she started to bleed. Her doctors prescribed bed rest: a technique that is, at best, medically questionable; at worst, it’s more than a bit challenging to the pregnant person’s mental, economic, and social well-being. (If you are thinking here of Charlotte Perkins Gilman’s “The Yellow Wallpaper”—and of course you are—so is Ruhl.) Ruhl gives us a brief history of bed rest, intertwining her own experiences with some solid research. She uses such a light touch that, as throughout the rest of the book, we don’t really realize it’s happening.

There is a sheer pleasure to Ruhl’s language. To be honest, I got lost in it, and kind of resented having to pause to take notes for this review. Even so, along the way, we actually learn something about the history of face research, the sociological stakes for smiling, and the nature of patient advocacy and allyship in navigating the health care system in the US. And what Ruhl discovered about bed rest, and what she teaches us, is that it lacks significant clinical support. It doesn’t seem to really work any better than not resting in bed at preventing miscarriage—or indeed at anything else—except making those assigned it really bored, deeply uncomfortable, and often quite resentful.

It has, however, made many women itchy. In Ruhl’s case, it wasn’t just a metaphor. She started to itch. Wildly. Unbearably. As an empowered patient, she did her research and found an extremely rare and dangerous condition that causes itching in pregnant women. Her doctors at first dismissed her. She was, it turns out, right. 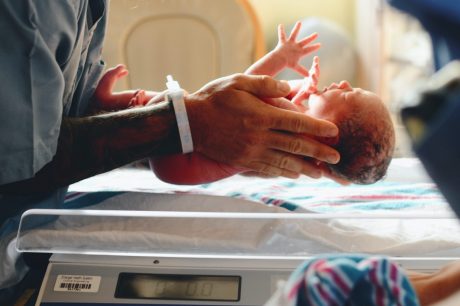 Mother of a Pandemic

A bunch of medical things happen. Importantly, the babies arrive and, after spending some time in the NICU, they are okay. Everything, one might be excused for thinking, would now be okay. How many rare things can a person get in one year? Or in ten years? In Ruhl’s case, more than one. Soon after her twins were born, a lactation consultant pointed out that her face was looking droopy. Ruhl—deep in the exhaustion only a new parent can ever really understand—assured the consultant that everything was a little droopy, especially because “I’m Irish.”

No, the consultant insisted. This was something else.

She was, it turns out, right. Ruhl’s face had fallen due to Bell’s palsy, a condition that left the left half of her face paralyzed. Temporarily, she was assured; 95 percent of people are better after a year.

Ruhl was to fall into the other 5 percent. And if it seems like a lot of unlucky things at once, that’s only sort of true, as we slowly learn throughout the book: Ruhl was sick a lot (like, a lot) as a kid, and evidently that matters. For her, and, in ways that eventually become clear, for her family.

When it comes to the body, she gently urges us to understand, sometimes it is worth decoding its messages, even when they are garbled. Even when communication is hard. Even when we have to work a little harder to understand, because the way we express ourselves may be half frozen. In her case, literally.

There’s a bit of a detective element to the narrative, and it feels kind of familiar; we are waiting for Ruhl to solve the mystery and figure it all out, bringing about resolution and an end to the problem. Such a story feels like it will have a happy ending; despite being amongst the statistically very unlucky, Ruhl will find the elusive key to cure. I won’t tell you if that happens—there’s a twist, more subtle and common that one might expect—but I will say that, actually, that’s not really the point.

I mean, on some level of course it is the point: living with Bell’s palsy for many years is very hard. Living without Bell’s palsy would be easier. But the point is in the living.

That seems trite. And, perhaps in the hands of a less-skilled writer and a less-engaging person with fewer accomplishments, it might be. Instead, it’s a powerful meditation on what it takes to live, and, especially, what it takes to live without the ability to smile or move half of one’s face.

There are implications: should she tell her students about her condition, she wonders, in case her face seems stern and judgmental when instead she wishes to be encouraging and supportive? Chewing becomes a different project altogether, and one she and her children learn together. Ruhl practices making exaggerated motions with her eyebrows to better communicate expression. (This makes more sense to us now; who amongst us has not smiled at someone, only to remember the smile is invisible under the mask unless we manage to make it clear through the movements of our eyes?)

There are aha moments: Ruhl comes to understand, from someone else with long-term Bell’s palsy, that one doesn’t need to smile in order to laugh. There are moments of self-mockery: it turns out that it is very hard to say her daughter Hope’s name with only one half of her mouth. There are villains, mostly doctors. And there are heroes, also sometimes doctors, and sometimes physical therapists. And sometimes gurus.

And there is history. There’s kind of a greatest hits of face studies, beautifully chronicled by Jessica Helfand in Face: A Visual Odyssey. There’s also a greatest hits of women’s bodies and their despair; Ruhl brings them together through her own unique perspective, informed by her experiences not just as a parent and patient but as a writer and playwright. She’s playful with her sources, spending some solid time on Duchenne and turning at times to the Victorian vibrators (they were a treatment for hysteria, and I bet you knew that already), Woolf, Sontag, Villette, Buddhist teachings, and mirror neurons. (Everyone loves mirror neurons.) It’s a sampling that echoes her own journey, pulling from here and there to figure out how to help her face, and, at the same time, to live in her face. And, really, to live in her body.

If there is a message here—and I wouldn’t go too far down that road; for all that it is erudite and literary and theatrical, this book is far from didactic but carefully and deliberately gentle—it’s that bodies and faces and minds and experiences are all connected.

That’s what makes this a great memoir: not that she has navigated life with Bell’s palsy, but that she has navigated life with Bell’s palsy as a mother, a writer, a friend, a wife, a person. It’s that, despite Genzlinger’s snark, you don’t always have to have had extraordinary experiences to write a memoir. You don’t have to be old, and you don’t have to, like Ruhl, have been nominated for a Tony (though it helps). You don’t have to, in the unfair idiom of the genre, have struggled and overcome, though everyone loves a happy ending.

What you do have to do to write a great memoir is to connect with your audience. To make them engaged in your life and your story. And what makes this one so powerful is that that very connection is itself in question.

Without the ability to smile, or rather, with the loss of the ability to smile, it was hard for Ruhl to connect: with others, and with herself. Her new self. (Her new self with Bell’s palsy, but also, and relatably, her new self as a mother of three children. She asks: Will she ever write again? So too have I.) Ruhl had to figure out new ways of connecting, and she has invited us in to both observe her process and, in a way, participate in it.

Ruhl could hide in words (she does, in a sense), but she doesn’t shirk from self-exposure, including several photographs of her face, once and now. That’s a deliberate choice, and a powerful one; while she is communicating with us through the written word, this is a visual story, with visual stakes in the world. None of us should forget that. None of us, reading this book, ever could. 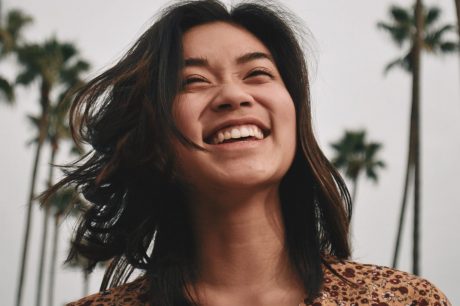 The Book of Faces

It is true that there is a lot of (curated) sharing these days. It may seem like everyone’s (or at least every young person’s, and get off my lawn!) life is open for perusal, engagement, and critique. A lot of critique. Genzlinger argues that the oversharing culture has lowered the bar for memoir; in the age of social media, there have never been more people who mistakenly believe they are interesting.

Those are not what makes this a great memoir. It’s that, in her description of herself, and her moments, she generates a sense of profound connection. Even without a fully functional smile. 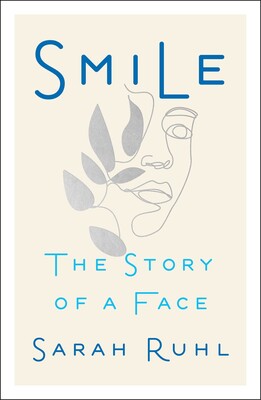 Smile: The Story of a Face