Failure’s Gifts
Even the most successful authors—like Phillis Wheatley and W. E. B. Du Bois—fail to publish all they’d like. What can that reveal about literature? 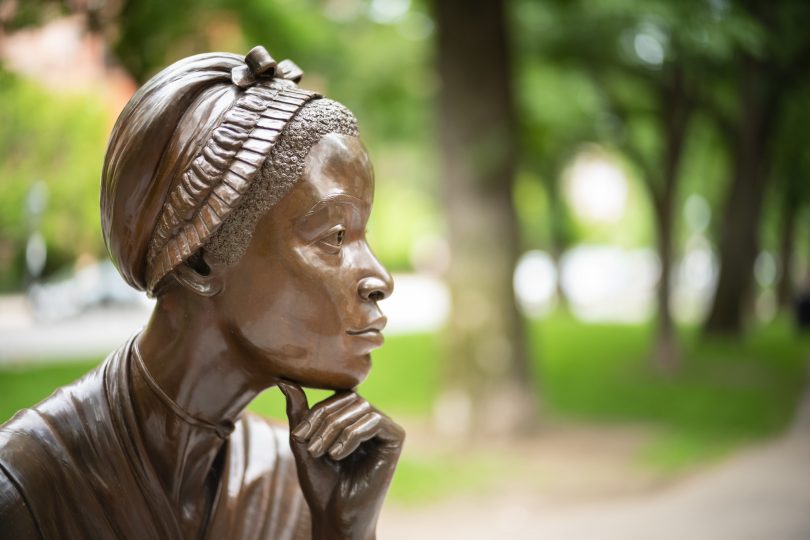 By Tara A. Bynum

Phillis Wheatley was a failure. It’s not a polite way to remember the first Black woman to publish a book of poetry in the American colonies in 1773. Still, it’s true: nearly 250 years ago, Boston’s celebrated poet tried to publish a second book of poetry, A Volume of Poems and Letters, On Various Subjects, Dedicated to the Right Honorable Benjamin Franklin, Esq.: One of the Ambassadors of the United States, at the Court of France. And, she never did even though she compiled a list of titles, searched for funding, and advertised her forthcoming work in local newspapers. Despite Wheatley’s best efforts, there is neither a printed book nor an extant manuscript of it. There is only an aspirational proposal and a series of lists of letters and poems.

Wheatley’s failure isn’t what we talk about. It’s certainly not how we remember the “first” enslaved, Black, or woman writer to publish a book of poetry in what would soon be the United States of America. What’s celebrated is what we can read in print, Wheatley’s collection Poems on Various Subjects, Religious and Moral. June Jordan remembers Wheatley’s poetry as miraculous, evidence of what today is called “Black excellence.” Her volume of poetry is, without a doubt, a feat worth noting for a formerly enslaved woman who journeyed the Middle Passage as a child and learned to read and write well in English shortly thereafter. And her published occasional poems and elegies are the reason she is memorialized as the beginning of the African American literary tradition. I see why, then, it might not seem worthwhile to think about her failure because it’s not as much fun to talk about as her success.

But what if Wheatley’s failure matters just as much as her excellence and genius? What if there is information in the book that never was, or at least in Wheatley’s desire to publish it? Does her failure to publish it reveal something about how culture or literature is made, imagined, or revised into being? What if the origin story of African American literature is not just a celebration of Wheatley’s success but also an acknowledgment of her failure?

I owe my curiosity about Wheatley’s failure to Elizabeth McHenry, author of To Make Negro Literature (2021). Wheatley is my example, not hers. I’ve learned from McHenry’s newest book to think of an author’s failure as a generative site of inquiry. I didn’t expect to read about achievement’s antonym today, when “Black excellence,” “Black joy,” and “Black girl magic” are celebrated, hashtagged, cited, and memorialized on T-shirts, postcards, and murals. McHenry teaches a kind of reading practice that applies to Wheatley as easily as anyone else. It’s a way of reading that listens closely to what’s said whenever an author is willing to admit (or sometimes, not) their failure. Consider, as McHenry does: W. E. B. DuBois’s printing business is a bust. Mary Church Terrell is never able to publish her fiction. Does Booker T. Washington count as a writer if T. Thomas Fortune writes for him? Or the Library of Congress bibliographer who painstakingly gathers book titles for a comprehensive bibliography of African American writers, but it’s never published.

McHenry teaches how to read the past in order to glean the lessons to be learned from defeat. If we study failure, we can learn about process, creativity, and the makings of literary culture in the US alongside the country’s history of racialized and gendered violence. The lesson of these authors’ failed work is that they organized what counts as African American literature as they reworked and revised their plans, their words, or their pursuits.

W. E. B. DuBois’s failed printing business; Mary Church Terrell’s unsuccessful attempts at fiction writing; T. Thomas Fortune, Booker T. Washington’s ghostwriter; a bibliographer’s unpublished lists of Black-authored books: McHenry won me over with her examples of these turn-of-the-century failures. She wonders how these writers made and created literature while failing to do well at it. It’s failure that makes “Negro” literature possible. It acts as an organizing principle, an inspiration, or a path forward.

What DuBois, Terrell, Washington, Fortune, and others left behind across time and place—in unpublished letters, failed businesses, or remnants of stories, poems, and musings—is a creative process: a “brilliant offness” (by way of José Esteban Muñoz) that admits to their own desires, dreams, and pleasures. To access this desire or process requires new ways of reading “the unfamiliar and now mostly obscure cultural artifacts” or the unpublished work, the “scaffolding” that makes literature: bibliographies, assorted stories in manuscript or typed, lists, and letters. It’s the “stuff” of someone’s personal archive or the contents of an attic.

McHenry can’t help but be most interested in the “stuff” that may not immediately read as literary, because it demonstrates what culture needs to emerge. “Literary history seldom privileges that which is unsuccessful, whether in terms of writers and texts never recognized by publication or projects that remained incomplete or unfulfilled,” she observes. I imagine it’s even harder to privilege what’s unsuccessful when there is a cultural imperative to ignore it.

The failure of these writers, McHenry argues, functions as a kind of practice: “a rejection of what is.” “What is” are those -isms upon which American culture insists: racism, sexism, classism. Reading for failure means to recognize, as McHenry explains, “the importance of our reevaluating those texts, genres, institutions, and forms of authorship that we have dismissed as unsuccessful, unproductive, unconventional, anomalous, or irrelevant.” By reading in this way, McHenry invites failure to speak and us to admit how it has made and shaped this literary history. Such reading reveals how Black authors have wrestled with and against “what is.”

McHenry’s reading of failure has invited me to wonder why I—or maybe readers in general—don’t look at failed or unpublished work in my pursuit of what counts as a compelling story about history, literature, or one’s self and community. Failure helps us understand how literary traditions are constructed. Public failure shows us how gatekeeping works, and it requires looking differently at the meaning of success.

What if Wheatley’s failure matters just as much as her excellence and genius?

McHenry chooses these particular authors in part because of when they were. Writing between the late 19th century and the earliest decades of the 20th century, they were caught in an era with no name. It is not presently popular in the way of Reconstruction or my students’ favorite, the Harlem Renaissance. It’s an era marked by literary failure, books and stories of which no one has heard, new ideas about what counts as a literary tradition, and racialized and gendered violence.

And yet, these authors and thinkers were risking their livelihoods, their stability, and at times, their peace of mind to try to tell, distribute, or catalogue the stories that they wanted to write or read. They were risking it all to make literature.

Each, in their own way, tried to make the kind of literature that celebrated their cultural “excellence” or proved the Black community’s intellectual prowess. To read for authorial failure as worthy of study or curiosity is to see how a presumed lack of success acted as “a way to audaciously reject and refuse the place assigned to them and the disrespect shown to their intellectual lives.”

What might look like failure can actually be an opportunity to condemn, discredit, and admonish those in positions of power who stand in the way of culture making and creativity. To make this kind of literature requires creators—writers and thinkers—willing to wrestle with uncertainty and take risks in life and in their work. Failure defines how African American authors—in particular, those writing at the turn of the 20th century—make and create literary culture. 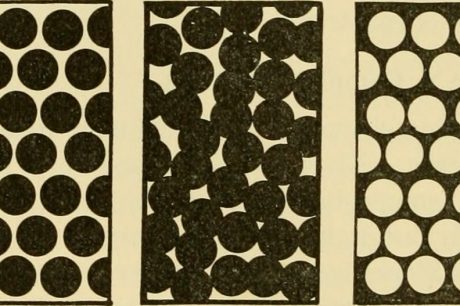 I know they make this sort of lament honestly. Popular culture has taught us to name, honor, and delight in Black excellence. Just this year, Beyoncé dropped her first new album in six years, Renaissance. I leave any reflection on the album’s success or failure to you, but what I know for sure is that the talk of it has been full of that word, “excellence.” Nearly 250 years after Wheatley’s contribution to American literary culture, Beyoncé’s genius is what we celebrate. It’s not easy to talk about creativity’s process or the space in which the author makes the work. It’s so easy to delight in excellence and avoid any discussion of failure. What works in a traditional literary way offers an audience proof of success. There’s a published book to read. For the singer, there’s an album to listen to. What is successful is deemed worthy of our time.

But not every song makes it onto the album. Not every draft gets published. And the reasons vary: racism, sexism, self-doubt, a lack of business or writerly acumen, or life’s messes.

I don’t suspect that Elizabeth McHenry would deny the certainty of excellence—Black or otherwise—at present or in history writ large. Rather, she seems to suggest that where there is excellence, there is also failure. Where there are printed best-selling books, there are unpublished, aspirational manuscripts, letters, and other “stuff” that few have thought to consider. It’s time to seize upon McHenry’s directive—“to make Negro literature”—and get into the mess of understanding failure’s gifts to the culture. 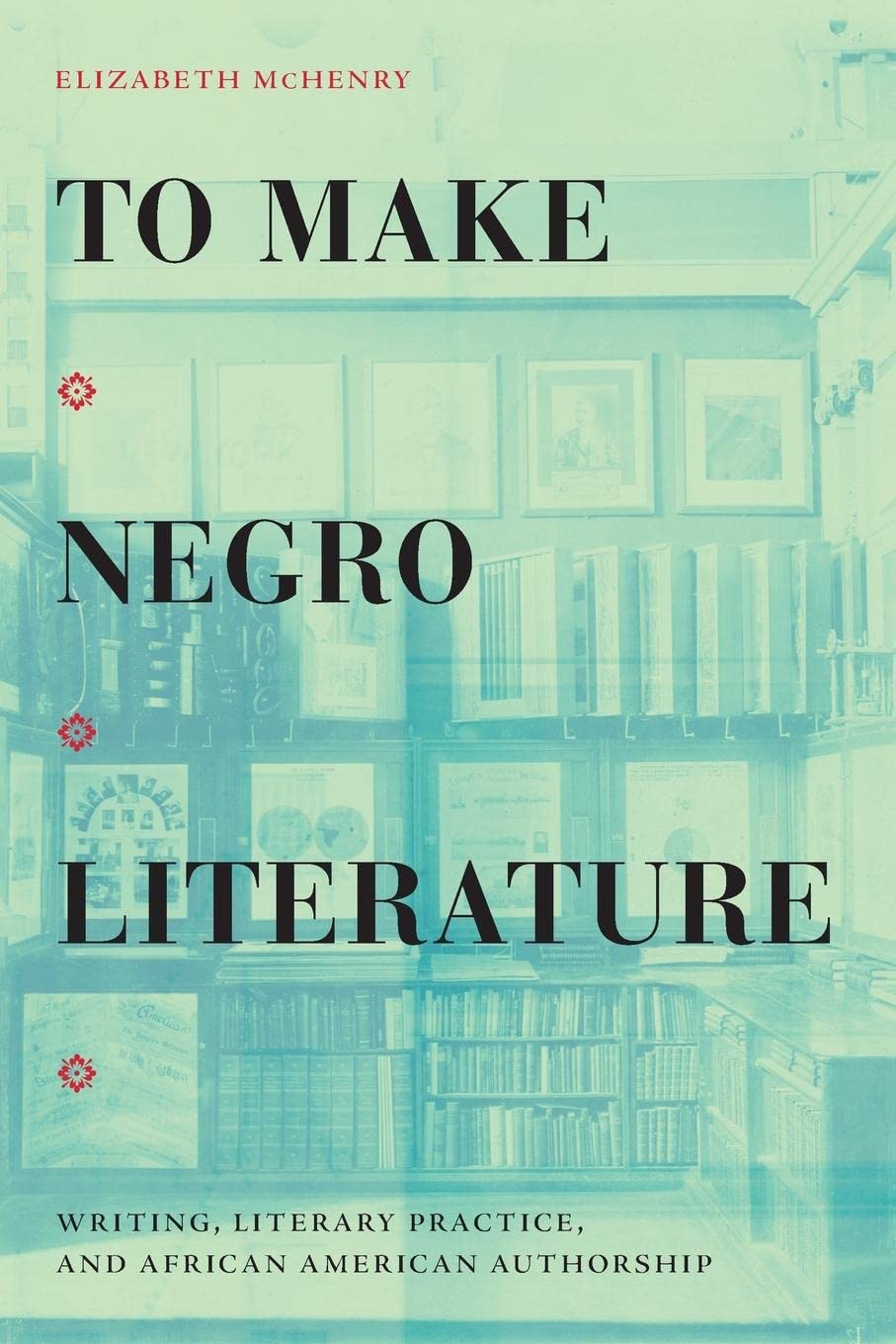