Twenty-Six Horses
This is the latest installment of El Mirador, an ongoing series curated by Francisco Cantú. Spanish for “the lookout point,” El Mirador collects original nonfiction, translation, and visual art on ... 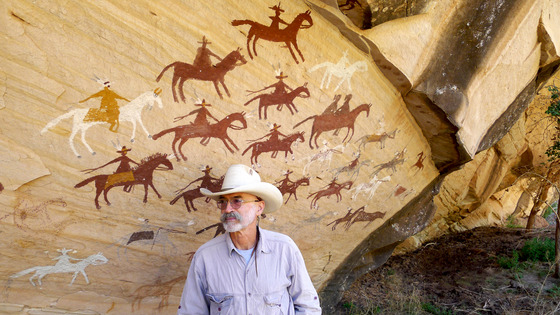 It begins with a false start followed by a wrong turn, despite our being equipped with a GPS and topo maps. Which, come to think of it, is how rez road trips often start. Crossing the Navajo country of northern Arizona, we end up taking the right combination of branching roads to reach the edge of an obscure canyon. I park among the junipers, and the four of us take off on foot to the rim of the gorge, winding below us in compound curves. We are on our way to find an old rock art panel depicting Indian horseman in full gallop across a cliff face.

“I’d have to lead my mule down this,” says E.T. Collinsworth as we pick our way along the remnants of a washed-out trail. A couple of days ago he arrived in Flagstaff behind the wheel of a Chevy pickup bought new in 1972. The cowboy poet and mule packer has kept it on the road with only a single “heart transplant.” The truck, not him. E.T. has read his work at various events, literary or otherwise, including the National Cowboy Poetry Gathering in Elko, Nevada. While planning the trip I told him the dress code would be rez casual, so he showed up wearing a pair of Kaibab moccasins, jeans cinched with a hand-tooled belt, and a vaquero hat referencing his days riding for a ranch in Mexico. A pierced ear hinted at his being a member in good standing of the cowboy literati, and his having packed serious literature on roundups had earned him the nickname, “The Professor.”

With two other friends we descend several hundred feet to the dry streambed and head down canyon. No one comes here, and the only tracks we see are those of a coyote on the prowl. Soon I notice a wall of sandstone flaring smoothly upward and recognize the pictograph site from my first and only trip here more than a dozen years ago. We climb the cutbank and stand before a tumultuous scene painted on the backwall of the overhanging cliff. Horsemen surge up the rock face with quirts outstretched behind them. The sweeping grain of rock sets the horses in motion as dozens of painted figures ride across the wind-laid sandstone. Mounted on red, white, and yellow horses, many of the riders have eagle feathers stuck in their broad-brimmed hats and most use high-cantled Spanish saddles. Only the leader carries a weapon, a feathered lance held upright. The panel appears to date from about 1850, and depicts a Ute raiding party escaping with the spoils. Two captive Navajo women ride a single horse, and the raiders drive a cow and longhorn steer before them.

“All of them ride with just the toes in the stirrups,” E.T. tells me. Having worked full-time as a cowboy from the age of 17 to 40, he notices these details. His career path, I’ve learned, has taken a few unexpected turns. After attending Deerfield Academy, an elite prep school in Massachusetts, E.T. entered Antioch College. To meet the curriculum requirements he arranged a six-month work/study program on a ranch in Brazil. “Up to that point,” he says, “I had never thought about working on a ranch in my entire life.” In preparation he signed up for a few riding lessons, and after outfitting himself in Levi’s and a wide-brim hat at the Chicago stockyards, he was ready to go. On his first work day he found himself in the saddle for a crippling 14 hours, becoming so stiff and sore they gave him lighter duty for a couple of days. Once back in the saddle he came to a realization. “I wanted to be a cowboy when I grew up,” he says.

During his saddle tramping days, E.T. earned $50 a day and all the beans and tortillas he could eat. “Times between the riding and roping gigs,” he continues, “it got down to one week smooth peanut butter, the next week crunchy, and rolling out my bed wherever I was let in. And always the cheapest panther piss beer. Living the Edward Abbey dream.” He cowboyed throughout the American West and down into old Mexico, dancing with the señoritas every chance he got. “I’m a two-stepping fool,” he admits. When he turned 40, he hired on with the forest service as a mule packer. His job was to provide “long-eared logistical support” for crews fighting wildfires in wilderness areas.

These days he picks up work as a helicopter crew chief or a medic on the fire line. Last month he worked a wildfire on the other side of the nearby Chuska Mountains and showed me an incident map they posted for the local Navajo. It was oriented to the east, rather than north, and listed place names in both Navajo and English. Among them were landmarks such as Pig Standing in Pond and Where Cows Roll Off.

E.T. lives in southern Arizona between Portal and Rodeo, 40 miles from the Mexican border. In cow camps he used to set out a jug of water and cans of beans for those who were slipping across the border and might be in need. No longer. The bad, he says, have replaced the desperate, and the border has reverted to a frontier where everyone goes armed. As a Spanish-speaking medic he is often called on to handle border emergencies, and the tragic nature of one incident turned the cowboy into a poet.

While working in West Texas, E.T. and another medic brought a dying Mexican child to the hospital in Alpine. “The contract doc,” he says, “from some city place far away in another world, like Dallas, after dispassionately pronouncing the child dead, flamed out when the other EMT and I told him the baby was, in fact, not a US citizen but from across the river in Ojinaga. Then the two of us went into the waiting room to tell the mother, who rode in the car behind the ambulance, her child was dead. In Spanish.

“It was this moment—in the middle of the doctor continuing his rant about what to do with this dead Mexican and the hysterical mother trying to be consoled by the women, their men silently milling about in their Resistols, lizard skin boots, gold chains against open chest snap button shirts and macho helplessness—it hit me. This is the West I have experienced since crossing the hundredth meridian, one more post-modern emigrant leaving the States behind in my covered wagon Chevy pickup lighting out for the Territories to continue the greatest of American traditions.” That evening he staring writing his first poem.

The first time I saw the panel of horsemen, William Eastlake’s Portrait of an Artist with Twenty-six Horses came to mind. “Up there on the rocks,” he wrote, “is a picture of an artist with twenty-six horses. But mine is someplace too. Everyone paints a portrait of himself someplace—every place—an unfinished picture.” On this cliff a Navajo has painted twenty-six horses, plus a handful. The event it records has gone unnoticed by historians, but one of the older Navajo living nearby might have heard an account handed down across the generations. Men on horses, the old restless story.

Moving along the cliff face, I find a few handprints painted by Puebloan people centuries before riders entered the canyon. Their simple, pictographic images gave way to the pictorial at some point, only to be replaced by the alphabetic. Many years after a Navajo painted horses on the cliff another came along, probably a young sheepherder learning to spell. Using mud he wrote the words, “Cows” and “Horse,” a stiff commentary on such a kinetic scene. How long does it take writing as a new form of expression to match the richness of painting? Its force, I suspect, lies in opening a new dimension of experience instead of replicating the old.

Back at the rim we reverse course, looking forward to a bowl of mutton stew in a town at the mouth of Canyon de Chelly. The last time E.T. came here was to teach the Navajo guides how to pack a horse. He was surprised no one knew the basic techniques and asked why. A Navajo gave him a smile and said, “We have pickups.”