Up From the Shadows
“Aren’t archives supposed to be forever? Well, forever’s a meaningless concept in Asia. Here, only the present is eternal.” So we read early on in Sandi Tan’s debut novel, The Black Isle, a ... 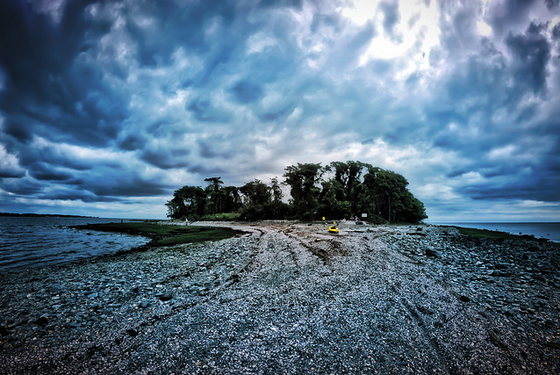 “Aren’t archives supposed to be forever? Well, forever’s a meaningless concept in Asia. Here, only the present is eternal.” So we read early on in Sandi Tan’s debut novel, The Black Isle, a supernatural romance that spans 1920s Shanghai, a World War II–era South Sea island, and modern-day Japan. The novel opens in 2010 Tokyo when Cassandra, the novel’s narrator and protagonist, discovers that her image has been removed from the city’s War Crimes Library archive; soon thereafter, she receives a call from a mysterious historian, who prompts her to recount her past. What follows is a story of the tragic betrayals that unfold when a young Cassandra (then known by her childhood name, Ling) leaves her home in Shanghai to move to the Black Isle, a fictional British South Seas colony that the Japanese soon invade. “Under the cover of war,” Tan writes, “human beings are capable of greater monstrosities than any natural—or supernatural—force.” Though Cassandra begins seeing ghosts at a young age, the wartime atrocities and postwar upheavals she witnesses ultimately prove far more chilling than the fantastical demons of her adolescence.

As Cassandra’s recollections trace nearly a century of Southeast Asian history, Tan’s novel weaves together various supernatural strands—from Malaysian folklore to the Victorian Gothic—to evoke the ways in which individuals and nations are haunted by attempts to erase their traumatic pasts. As Cassandra’s historian later asks, “how do I safeguard the national memory when I still have huge gaps in my own?” Mixing elements of horror and romance to engulf her readers in phantasmal scenes where terror and desire frequently comingle, Tan’s novel alternates between entertaining pulp and disturbing violence—which readers can take as either a warning or an enticement. Tan got her start as a filmmaker and her novel often resembles a horror film—long on visceral details and plot twists, short on character development. That may sound like criticism, but the novel’s spectacular effects also represent its stylistic innovation. Though Cassandra claims that she “resented the idea of being an equatorial Jane Eyre,” the novel’s ingenuity comes from combining “Western” literary touchstones with elements of “Eastern” supernaturalism, from a pontianak, a vampire-like she-demon drawn from Malaysian folk culture, to the urban ghosts who haunt the Black Isle’s rapidly modernizing metropolis—a hallmark of recent Singaporean fiction.1 Over the course of this four-hundred-plus-page novel, these seemingly heterogeneous elements can make for an uneven read. But at times the reader senses the potential Tan’s hybrid horror story has to upend divisions between history and modernity, national and global culture.

Indeed, Cassandra’s story suggests that Tan’s purpose lies in uncovering the role women have played in a history that has consigned them to its shadows. As Cassandra’s historian tells her early in the novel, “Your very presence is defined by your absence.” This conspicuous absence is what drives Cassandra’s communion with the underworld, where she finds figures who have been pushed to the margins of the visible world and who, like her, appear at some moments to be history’s victims and at others its secret engines. Following her confrontation with the pontianak, for instance, Cassandra recounts the demon’s disorienting power: “I couldn’t forget how her alien heartbeat had devoured mine, tying me to her, or was it the other way around? Who had colonized whom?” The same impulse to explore the ambiguous relationship between Cassandra’s vulnerability and her strength animates Tan’s displays of pornographic terror. Though discomfiting, Cassandra’s graphic love affairs can also be illuminating, as when Tan depicts how the male aggression that fuels colonial conflicts often catches the bodies of women in its line of fire. Forced to “barter in skin” for her survival, Cassandra tells us, “I fled into my body,” where she learns “to escape from the present and forget, forget, forget.”

These forays into romance-novel territory falter, however, when Tan attempts to register their emotional impact:

Was marriage all that important? Today’s women might roll their eyes at me, but back then it meant securing Kenneth’s heart. Of course, it’s not as if I were a simpering Victorian heroine in a frilly pinafore, waiting for Mr. Darcy and his sachets of gold. I was a strong woman who could summon forth spirits and accomplish in weeks what Kenneth couldn’t begin to do in years. Even so, when it came to making the first move, I was still only a woman.

Too somber to be fun, but not moving enough to be taken seriously, these moments may leave readers wishing that Tan had resisted the urge to make Cassandra into such an expansive narrator, since doing so mitigates the inchoate desires that lend her psychological complexity. The strength of Gothic fiction lies in its power to bewilder, forcing us to confront the incoherent forces that control us. By attempting to explain these incoherencies, Tan ultimately undoes some of her novel’s power to imagine history’s most horrifying crimes—crimes that she renders most forcefully in those moments when her phantasms succeed in disturbing our sense of history as usual.