Up from the Willamette
This is the latest installment of Public Streets, a biweekly urban observations series curated by Ellis Avery. If you tell people you live in St. John’s, everyone says, “Oh, that’s a really ... 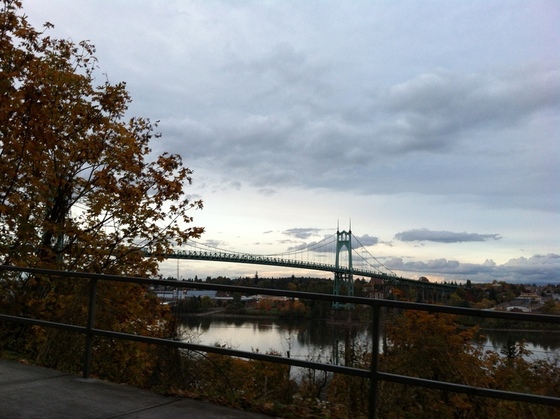 If you tell people you live in St. John’s, everyone says, “Oh, that’s a really interesting neighborhood,” or “I’ve been there!” as if it were a destination. To get there, you take the highway along the Willamette River and cross the St. John’s Bridge, the comically picturesque green gothic structure that adorns nearly every locally made, screen-printed, felted, tintyped t-shirt, organic cotton onesie, and framed photo print in Portland. From its span, neatly framed in its arch, you can see the peaks of Mt. Hood, Mt. Saint Helens, and Mt. Adams above the roofs of north Portland. The bridge spits out traffic right between the cupolaed cube of a historic police station and the curved facade of a shiny new mixed-use four-story development. The flatbed steel trailers turn left towards the shipping terminals and warehouses, while the ambitious weekend bicyclists go directly ahead and stop for a latte at the James John cafe.

On Lombard, St. Johns’s Main Street, there are old, new, and empty storefronts. The grocery/bakery/taqueria enjoys steady traffic. The cluttered bookstore and vegetarian cafe get busier every summer. The tiny gelateria run by two brothers purrs along, selling organic coffee and blueberry muffins they baked with local duck eggs. The “Men’s Shop” sells shoes, sweaters, and knit hats under a mid-century oval sign, and the fencing salle sits next to the optician. Patty’s Home Plate diner sells bric-a-brac and a few yellowed second-hand paperbacks alongside their three-egg breakfasts and shakes. They also sponsor belly-dancing fundraisers and a classic cruiser street fair. An empty Salvation Army is nestled discreetly between newer shops, but the Jower’s building juts out alone over a grassy vacant lot. A single Chinese family, Wan Jower, his wife and their children and grandchildren, sold dry goods and shoes there for exactly a century. It is dark and dusty inside, and there are suspicious stains on the doorstep. The side facing the empty lot is freshly painted, but the windows are empty.

The other thing people say about St. John’s is, “Hey, that’s cool, it’s up and coming.”

The other thing people say about St. John’s is, “Hey, that’s cool, it’s up and coming.” What they mean is that the neighborhood’s bright blue wooden houses are slowly being purchased and repainted in tasteful earth tones, their white steel security gates replaced with craftsman-style doors; that the empty lots around Cathedral Park are gradually being filled by broad two story houses with undersized pillars tacked onto their porches.

“Cathedral Park” refers to both the park under the St. John’s bridge and the neighborhood west of Lombard, where the streets descend down to the banks of the Willamette River. The concrete piers supporting the bridge mirror the gothic arches of the suspension towers above. If you stand in just the right place on North Edison Street you can look straight down the nave of the cathedral that gave the park its name, where willows grow under arches four and five stories high.

In the shadow of the bridge are steel fabricating shops, a chocolate truffle factory, and the old Columbia woolen mill, now partitioned into offices and studios and a microbrewery.  Several clusters of new townhomes stand where an old school bus used to sit in an empty lot. Among them slumbers the half-finished steel skeleton of a big boat, someone’s dream gone fallow under piles of rope and brush. Past the park and the townhomes are old rail yards, scattered with stacks of sheet steel, and dead-end alleys overgrown with invasive blackberry. Homeless people camp in the brush along the river, leaving behind mattresses, tarps, and white plastic bags. When the river is low their campfires burn next to the steel and timber bones of the old wharfs.

The residential streets of Cathedral Park, Edison, Willamette, Syracuse, Baltimore and Catlin, run into either the river or the wooded margin of the industrial area where the Toyota off-loading facility and brownfields lie. Generations of houses have filled in unevenly: a cluster of 1920s bungalows here, a few ranch houses there, allowing trees to grow tall in the gaps. Scattered here and there among the smaller houses are a few old four-squares: farm houses and an early 20th-century hospital, now a  rental building, flipped several times. There’s a cinderblock convenience store and the Your Inn tavern, where bikers and fender plant workers watch the games. 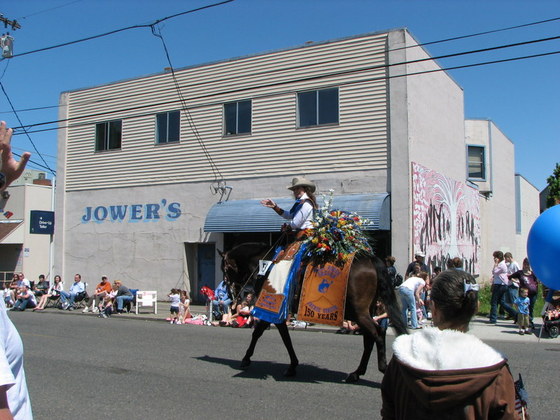 Up through town from Cathedral Park, past Lombard, the rest of St. John’s is flat, built on drained sloughs at the confluence of the Columbia and Willamette rivers. The houses are mostly tidy boxes or split-levels, built for Korean war vets who came home to work at the docks or in the factories. This place, where the flats meet the slopes of Cathedral Park, was once an independent village, home to the “world’s first commercial plywood operation,” built on the banks of the Willamette a century ago.  Now it is a meander, where ripples of young families from other neighborhoods pass through with their jogging strollers. They wash briefly past the barbershop, and the bars where retired truckers sit solidly at the aluminum tables, smoking. Latina women with their babies wait for the bus in front of the liquor store down from the lonely Jower’s building. The shades of Wan and Violet Jower and their five sons watch as a chain link fence goes up in the empty lot, the sign of new construction coming.