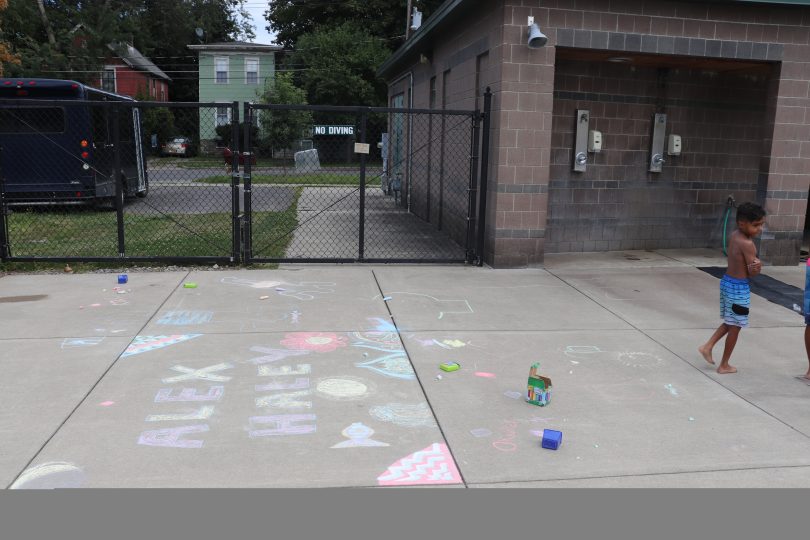 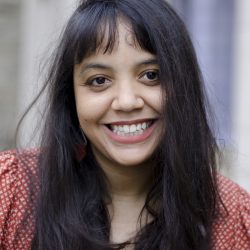 The writer Alex Haley was born in the city of Ithaca (just south of Ulysses, NY), as if he were destined, like Odysseus himself, to become famous for going home. Haley’s return “home” to Gambia would be dramatized for millions on the TV mini-series Roots (based on his 1976 novel of the same title). But while Odysseus spent ten years making his way back to Ithaka, Haley left its American namesake almost as soon as he’d arrived there. Born August 11, 1921, Haley spent just the first six weeks of his life at 212 Cascadilla Street, a quiet road that leads, like most things in Ithaca, to a gorge. In the hot summer months, locals ignore the detailed warning signs that mark the gorge entrances and swim in the cool waters that pool there. Most people here either know someone or know of someone who’s died swimming in the gorges, and so the city takes on a haunted quality in the summer.

In the other direction down Cascadilla is a place for the fainter of heart to swim: a public pool with lifeguards, snacks for purchase, and the distinction of being named after native son Alex Haley. In 1921, Haley’s father was just finishing up his master’s degree in agriculture at Cornell University when his wife, who was studying at the nearby Ithaca Conservatory of Music, gave birth. Less than two months later, they (along with the newborn Alex) moved to Tennessee. Despite this threadbare attachment to Ithaca, the town is pleased to claim a connection to Haley, author of path-breaking texts like The Autobiography of Malcolm X, Queen, and, of course, Roots (which more than half of the US population watched when it was adapted for television).

It’s an unusual choice—a pool named for a writer—but then again much of Haley’s legacy revolves around the crossing of a body of water. In the port of Annapolis, there is a statue of Haley reading Roots to a group of children; it is made to mark the place where Kunta Kinte (the main character of the novel) arrived from Gambia after being transported on a slave ship across the Atlantic. Haley also spent the first 20 years of his career on the water; he enlisted in the US Coast Guard at age 18 and served in the Pacific during World War II. His crewmates knew him as an aspiring writer, often asking Haley to write love letters for their sweethearts. In 1999, the Coast Guard named a ship after him; the USCGC Alex Haley (based in Kodiak, Alaska) enforces fishing laws and does search and rescues as needed. 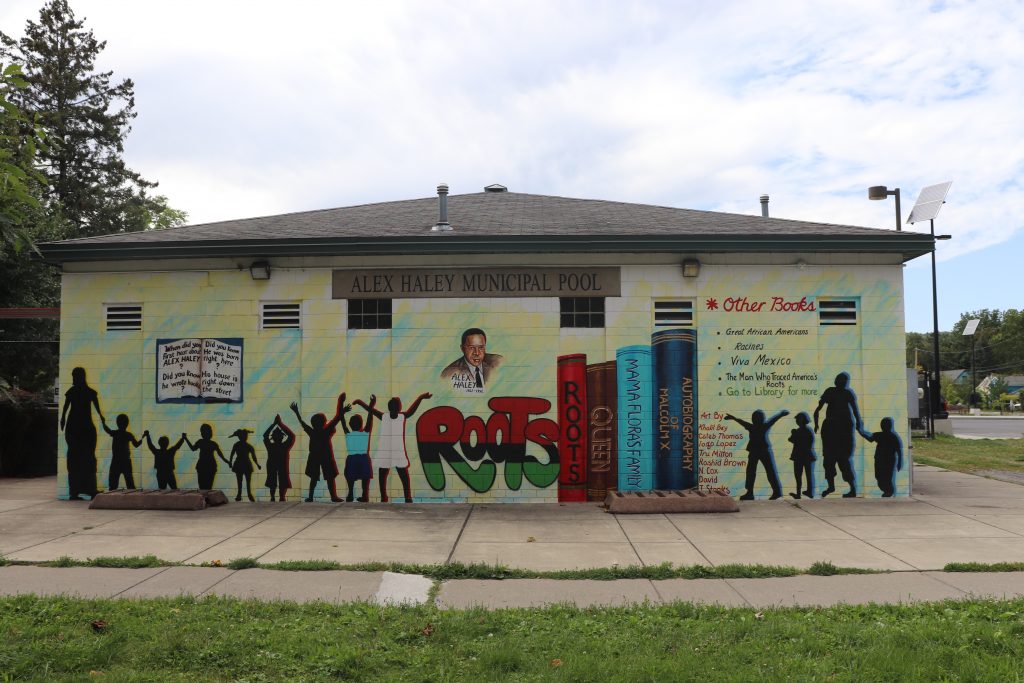 The entrance to the pool features a mural celebrating Haley’s literary legacy, but it’s not the design that Khalil Bey, the local artist who designed the mural, initially conceived. In an interview, Bey explains that his original vision for the mural focused on the story of Kunta Kinte, including his capture by slave traders in Gambia and the horrors of the Middle Passage. Bey says, “I had slaves being collared and chained and walking in rows, and some of the struggles they had to go through.” Bey and his team ultimately went in another direction, one that I imagine is easier to swallow in a town like Ithaca, which has seen its small African American enclave, the Southside (a neighborhood not far from the Haley pool), diminish as rents and racial tensions have swelled.

The current mural boasts more of a pencil case aesthetic, its message of racial uplift more scribbled than stamped. Its audience is schoolchildren, whom it asks in black painted letters: “When did you first hear about Alex Haley? Did you know he wrote books? Did you know he was born right here? His house is right down the street.” I start to answer the questions in my head and walk away, pleased with the quiet subversion of a public facility named after a black man. But just then, the affective volume increases: a large storage container comes into view just steps from the pool. The words “Free Mumia” are emblazoned on its side in the colors of black liberation (the red, green, and black that never seem to lose their effortless defiance).

Though not as grand as a Coast Guard ship, a municipal pool named after a black writer in the context of US history (where pools were key sites in the fight to desegregate public spaces) carries a political force unmatched even by a former navy vessel. Swimming pools remained segregated in the United States even after the nation’s schools were forced to integrate. Fears of intimate interracial encounters and racist beliefs about the health of black bodies made public swimming pools and beaches some of the most contested spaces in Jim Crow America, with black protestors across the country staging “wade-ins” to force the hand of public officials. 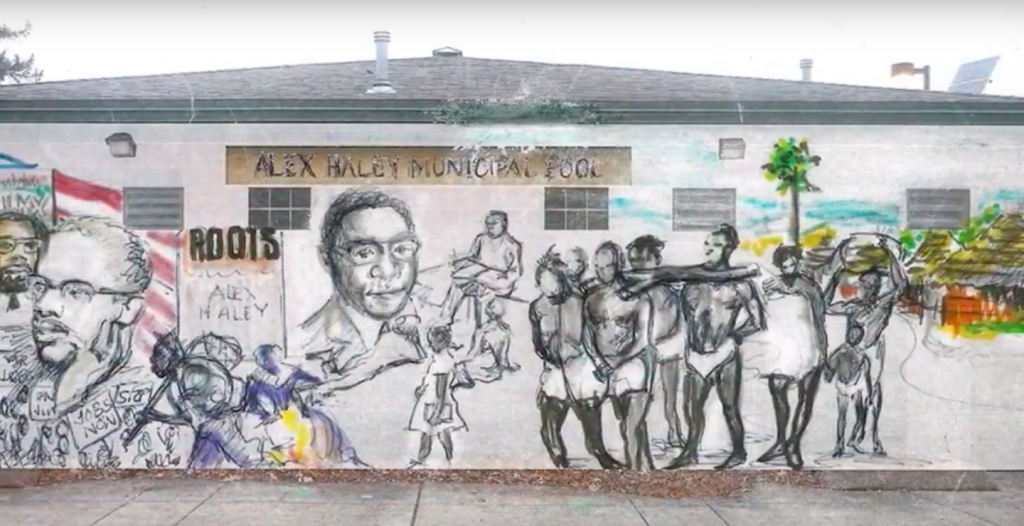 After municipal pools were forced to integrate, many white Americans simply abandoned them altogether. In his 2007 book Contested Waters, historian Jeff Wiltse writes that “[White] Suburbanites organized private club pools rather than fund public pools because club pools enabled them to control the class and racial composition of swimmers, whereas public pools did not.” The withdrawal of public support and funding for public swimming centers following desegregation continues to have a deadly effect on the lives of black and brown Americans. A CDC study found that black children are three times more likely than white children to die of accidental drowning.

The pool where I swam as a child in Philadelphia was named after Grace Kelly’s father. I can doggie paddle and float around a bit on my back, but I’m useless if anything that resembles real swimming is required. After visiting the Alex Haley pool in Ithaca, I couldn’t help but wonder whether I might be able to do the front crawl, if this is what pools had looked and felt like to me then—if swimming had seemed like an activity part and parcel with being a bookish black child.