Wellington’s Cuba Street: On the Restless Taniwha
This is the latest installment of Public Streets, a biweekly urban observations series curated by Ellis Avery. You can’t, it is said, beat Wellington on a good day. Those days come in January, in the ... 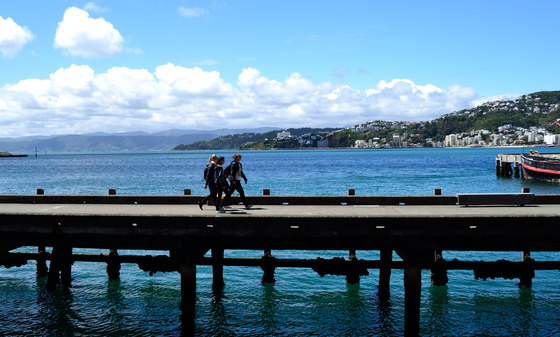 You can’t, it is said, beat Wellington on a good day. Those days come in January, in the height of the New Zealand summer. The wind softens to a breeze, silver sunlight floods the jade hills that surround the downtown, and the city wraps around a harbor on its best behavior, turquoise and glassy.

Wellington is small, as cities go: a weatherbeaten tumble of wooden villas, Edwardian shopping streets, Art Deco apartment blocks, and regrettable 1970s high rises. For much of our history, the basic buildings were thought to make Wellington “the ugliest city in the colony.” But if you feel urban in your soul, and you live in the lower two-thirds of New Zealand, Wellington is your best bet for two thousand kilometers.

Once in Wellington, those urban souls pack themselves as close to central Cuba Street as they can get. Sheltered from the Antarctic winds, its high-ceilinged old buildings never vacant, Cuba Street and its tangled surrounds have been Wellington’s marketplace and boulevard for four bohemian generations. The ‘70s sex shops may have been cleaned up to house Venetian restaurants and vintage boutiques, but still, the century-old shopfronts maintain a knockabout charm, interspersed with night markets and buskers, cafés sheltering meetups for vaudevillians and hackers. At one end of Cuba Street, the Bucket Fountain clanks and gushes, awkward and beloved.

Cuba Street ends at a slender park that parses the working streets from the playful, sculpture-dotted waterfront. Here, along the open esplanade, fresh, angular buildings seem ready to fly to outer space, anchored only by the massive cheese scones in their ground floor cafés. The new waterfront still retains its own old-fashioned charm: that of, inevitably, running into someone you know for a windswept chat.

What about this weather? How’s that new coffee place? Did you feel the quake last night?

For, in Wellington, we are perpetually braced for earthquakes.

It is said that our harbor, Te Whanganui-a-Tara, was bashed open to the sea by a vast water spirit, a taniwha, and that another taniwha still turns restlessly beneath Wellington’s hills. A 19th-century series of earthquakes undid any architectural pretensions we might have had for seventy years, while lifting enticing new flats of land out of the harbor, which were promptly used for new neighborhoods. The Christchurch earthquakes of 2011 killed 185 people, leveled whole blocks downtown, and sent a wave of exiles to Wellington’s spare rooms and couches. Wellington sat up and took notice: if we weren’t first, we were certain we’d be next.

Now, tsnunami markers are freshly stenciled on our tunnels and roads, telling us which way to run if the land shakes the sea. Quake kits are stocked at the gourmet grocery stores. Half the buildings on Cuba Street are listed as “earthquake prone.” Perhaps one-tenth of these buildings have received the improvements optimistically called quakeproofing.

The possibility weighs on our shoulders like the black down jackets most of us stash near us year-round, whatever the season. What if there’s a quake? And you have to walk ten kilometers home through a shattered, sea-drenched city? Go-bags of necessaries and backpacks with laptops secured slump by our beds at night, improvised water storage packs our pantries. When a quake of any magnitude does hit, the city reacts with a mix of flight and carnival. Everyone, against advice, runs into the streets, then to a pub. 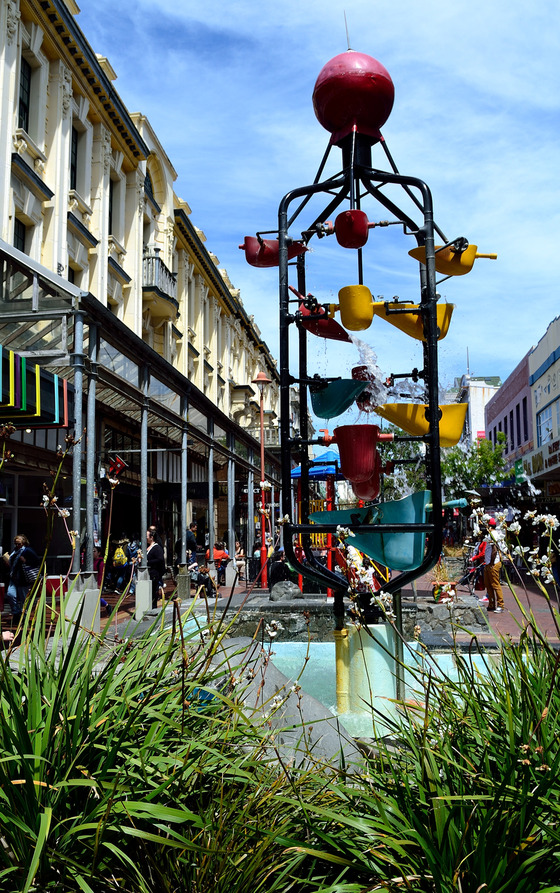 The Mighty Bucket Fountain. Photograph by Buffy May Nichols / Flickr

The threat is real, yet unreal. We are overly assured by the parking lots closed for strengthening and the shop fronts that seem old to us. The buildings on Cuba Street have only been there since the last earthquake, the one in 1865. But the silver sunlight and Cuba Street’s awnings soothe us nonetheless.

A quake? I must have slept through it. Was your place OK? Shall we grab a coffee?

Something between resilience and denial keeps us all here on the restless taniwha. When Wellington had its own 6.1 quake two years ago, both the ‘70s high rises downtown and the wooden villas, light on the surrounding hillsides, surfed it well enough. Cats, used to the rumbles, sleep through them. Wellington poet Cordelia Black says, “We live on the edge of madness and it doesn’t make us skip a beat.” It’s true. And if we left, where else could we find people like Wellington’s?

Huddled into our black jackets in midsummer, we Wellingtonians are getting on with it. Inevitably back on Cuba Street, we are sitting at chipped tables in a deliberately unfinished café, exchanging rounds of drinks, mystified by the two-story mural that appeared overnight near the corner of Cuba and Arthur streets, optimistically planning our days and nights. Today is still a good day.