What Future for Magic Mushrooms?
Hallucinogenic mushrooms have been used for centuries by numerous indigenous peoples around the world. These fungi appear in Aztec statues (like the one ... 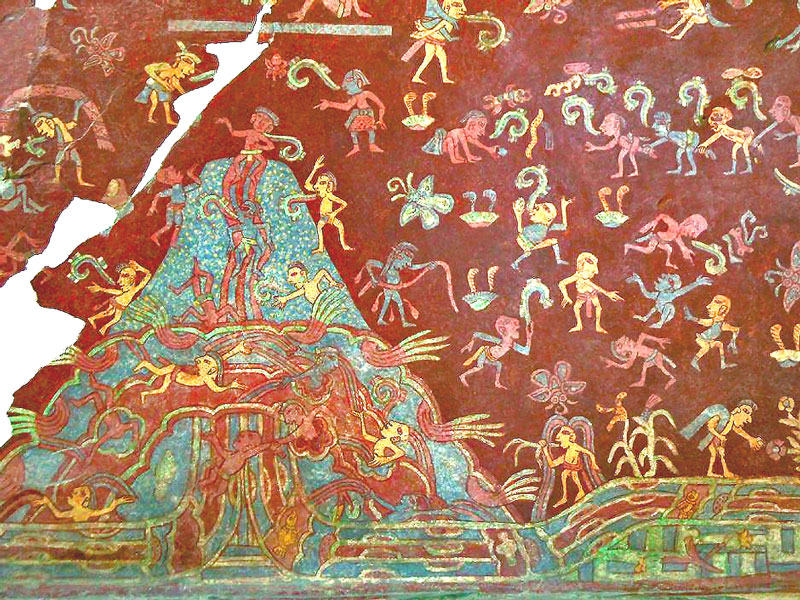 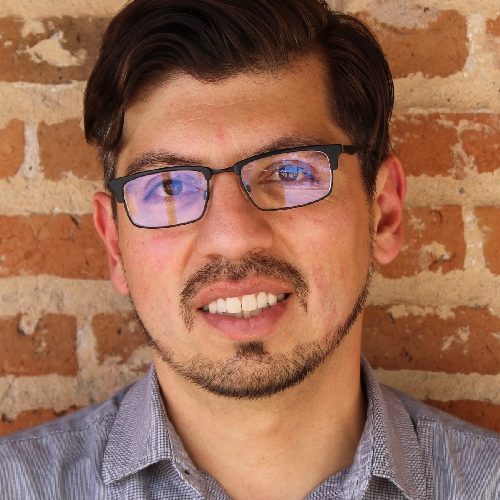 Hallucinogenic mushrooms have been used for centuries by numerous indigenous peoples around the world. These fungi appear in Aztec statues (like the one representing Xochipilli), in murals (like the one in Tepantitla, depicting the Tlalocan), and in poems (it has been argued that they are the “flowers” in Huexotzinco’s pre-Columbian “Flower Poems”). The poet famously proclaims: “I come hurried to interweave / the Flowery Tree / of laughing flowers / flowers without roots … You are singing: you have come back from there you are interweaving them: let us enjoy ourselves.”1

The Spanish colonizers, after the conquest of the Aztecs, also took note of the indigenous use of such “flowers.” The Florentine Codex, for example, describes how indigenous people would eat Teonanacatl (Nahuatl name for hallucinogenic mushrooms, meaning “the flesh of the gods”) to communicate with other, nonhuman entities. Of course, the Spaniards condemned the use of such mushrooms (and other hallucinogenic plants) as diabolical and sought to eradicate their use. But they failed, and the use of hallucinogenic mushrooms continued underground.

Recently, such mushrooms are coming out of the underground and into the full light of the Western world. Since 2006 there has been a modern renaissance in psychedelic research—as Michael Pollan explains in his recent book, How to Change Your Mind—that involves substances like hallucinogenic mushrooms.

This renaissance is not limited to the medical world. The first half of 2019 has seen a significant increase in the number of cities that have decriminalized the possession of mushrooms containing psilocybin—the chemical responsible for the hallucinogenic effects—for personal use. In May 2019, Denver became the first city in the US to de-prioritize the imposition of criminal penalties on those found in possession of hallucinogenic mushrooms. Next, in June, Oakland decriminalized the possession of hallucinogenic mushrooms. (Other plants and cacti were also part of this initiative.) Similar initiatives have been put forward in Oregon and Iowa.

In many ways, this movement and the initiatives it has advanced are all a welcome step in the search for new ways to treat such disorders as depression and post-traumatic stress disorder. The reasons more people, both civilians and medical professionals, are promoting these mushrooms can be easily seen: more and more research identifies psilocybin as a promising medical tool.

And yet the ostensibly novel medicinal use of “magic” mushrooms is in fact nothing new, and their decriminalization is but a blip in a long, complicated, and sometimes violent history. Understanding the ways in which indigenous peoples have used, and continue to use, psilocybin-containing fungi can shift our attitudes not only about the legalization trend but also about how we think about their potential for medical advancements.

indigenous knowledge about hallucinogenic mushrooms is often portrayed as prescientific and thus useless in modern settings, a narrative mimicking the colonialist language of “discovery.”

Indigenous peoples, as we have seen, have used hallucinogenic plants for centuries—well before the arrival of Europeans in their respective lands. The popularization of hallucinogenic mushrooms outside of Mexico, however, is often attributed to their “discovery” in indigenous Mazatec territory by Robert Gordon Wasson, in the 1950s.

Wasson’s photo-essay, “Seeking the Magic Mushroom,” was featured in Life magazine, in 1957. This essay drew outsiders—first a wave of American and European tourists, and later a wave of middle-class Mexican mestizos—to the highlands of Oaxaca, where they sought to experiment with the “magic” mushrooms.

This movement, created by Wasson, also popularized the figure of María Sabina: the Mazatec curandera (healer) who had provided the mushrooms to Wasson, and who has become an iconic figure of Mexican counterculture and the Mexican hippie movement.2 Sabina died poor, despite the significant amounts of cash that flowed through the region in large part due to her work. It is said that she regretted the popularization of the mushrooms, which she called “little children.”

The fate of María Sabina, and of other indigenous men and women who have used hallucinogenic mushrooms for centuries, seems to repeat itself. They are rarely mentioned in the media or in the scientific papers that celebrate the wonderful properties and potential of “magic” mushrooms.

In fact, the legacy of indigenous knowledge about hallucinogenic mushrooms is often portrayed as a vestige of a past long gone: as premodern, prescientific, and, thus, not useful in more modern settings. Such narratives mimic, in many ways, the colonialist language of “discovery”: in this case, it is Wasson and ethnobotanist Richard Evans Schultes who receive more credit than María Sabina does for introducing hallucinogenic mushrooms to the West.

This erasure of indigenous ways of knowing and doing is not something new in the medical field. There is, however, another erasure that is worth noting: that of Mexican psychiatrist Salvador Roquet.3

Roquet experimented with hallucinogenic mushrooms (and with other substances, such as LSD) in clinical settings in the 1960s. Roquet is considered by many as a visionary, due to his innovative use of psychedelics in psychiatry. Perhaps what is most interesting about Roquet and his use of hallucinogenic mushrooms is that he was interested in what indigenous Mazatec experts had to say about the subject.

Roquet believed that “knowledge outside a clinical setting was critical to unleashing the power of these drugs,” Alexander Dawson notes in his book The Peyote Effect.4 In fact, Roquet even met Sabina and sought to establish a working relationship with her. It is hard to say how many of the psychiatrists who are embracing the use of “magic” mushrooms in the US (and in the global North in general) would be willing to pay Sabina—and the countless indigenous experts like her—the same attention or courtesy. 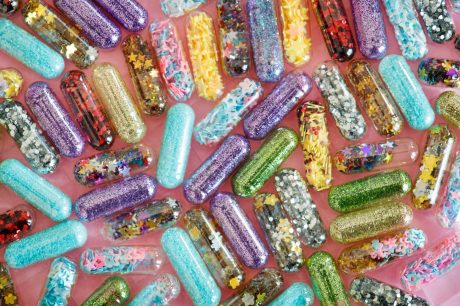 Why would it be important for researchers today to understand (or at least recognize) indigenous ways of knowing, especially given that methods of administering hallucinogenic mushrooms in clinical settings are so different from those used in indigenous ceremonies? Can these differences in practice tell us anything?

The differences between these two approaches to hallucinogenic mushrooms are sometimes obvious and sometimes subtle. “All of the scientists doing psychedelic research today,” explains Pollan, “work exclusively with a synthetic version of the psilocybin molecule.”5

Instead of consuming the mushroom itself, these researchers take tasteless pills. Swallowing these pills requires far less effort than chewing the rubbery-textured and bitter-tasting mushrooms, which are, in most instances, still covered with dirt—maybe even manure—and holding onto white mycelium particles.

These differences might seem insignificant. Perhaps not everyone would be interested in experimenting with such hallucinogenic substances today if they were confronted with the actual mushrooms instead of the pills.

Regardless of how you ingest it, the properties of psilocybin are the same. For centuries, mushrooms containing psilocybin have been used to treat all sorts of maladies, both individual and social, physical and psychological, and also to seek guidance regarding the future, through divination. In such circumstances, the body and the soul (or the mind) are not necessarily seen as separated; thus, medicine and religion need not be seen as opposites either.

This is something that is often lost when highlighting that the Mazatecs, even Sabina, were devout Catholics and that, therefore, they used mushrooms “not for worship but for healing” and, thus, were not reproducing ancient indigenous rituals but only using them in a strictly functional way. Such critique misses the true nature of such mushroom ceremonies entirely. Being Catholic and taking mushrooms is not that different from, for example, being terminally ill and employing psilocybin.

This idea—the conceptual separation of the body and the mind—is not the only Western element influencing the ways today’s culture views how hallucinogenic mushrooms work. The West’s highly individualist language to describe mental disorders, for example, does not fit with many non-Western ways of describing and treating such disorders. Outside the West, personal disorders are commonly seen as part of social contexts. And so, in order to solve a personal problem, it is not enough to look exclusively at an individual; social pressures can easily manifest in the body through somatization, confounding Western medical doctors.6

Moreover, outside the West, using mushrooms is thought of not only in “functional” terms (that is: to heal an illness, or to connect with a person), but also as a way to develop creativity and knowledge—think of the “Flower Poems,” for example.

Mushrooms, in this light, might as well be medicine. But they are not solely destined to treat specific bodily or mental disorders. Instead, they are conceptualized as part of specific cultural practices and beliefs: this explains their Mexican name, teonanacatl, or “flesh of the gods.”

The future of mushrooms may well look like trained psychiatrists scientifically engaging with the mushrooms’ magic, as they attempt to heal their (probably) upper- and middle-class patients.

Today’s growing interest in hallucinogenic mushrooms contains an interesting tension. On the one hand, individualizing Western language—which is often associated with medical treatments—continues to dominate. Such language, whether describing individual spiritual developments or “consciousness-expanding” experiences, continues to promote a divide between mind and body that did not exist for the first mushroom users. On the other hand, the advances of psychedelic research have shown that “the mystical” and “the scientific” can coexist.

And yet, although Roquet’s use of hallucinogenic mushrooms could be easily classified as “appropriation,” explains Alexander Dawson, his relationships with mushrooms and with María Sabina appear much more complex upon recognizing that non-Western ways of knowing had a place in Western psychiatry.7

A similar claim could be made about the potential use of hallucinogenic mushrooms by Western medical doctors in the treatment of depression. Unlike the emergence of ayahuasca ceremonies—which seek to provide upper- and middle-class American and European tourists with a taste of “indigenous spirituality”—the use of mushrooms seems to be destined for a pristine clinical setting. The future of mushrooms may well look like trained psychiatrists scientifically engaging with the mushrooms’ magic, as they attempt to heal their (probably) upper- and middle-class patients.

Although Sabina despised the ways in which hippies used mushrooms (in the middle of the day, listening to loud music), she seems to have been always open to sharing her knowledge. She did not speak the language of appropriation.

Today, it is just as important to look beyond appropriation: to think about power asymmetries in play (like the ones that informed the relationship between Roquet and Sabina), and to question the extent to which the new psilocybin medical professionals should ground their work in indigenous ways of knowing.

Situating the decriminalization and legalization efforts of “magic” mushrooms within such “asymmetrical history” would help us to rethink the ways in which this “new” scientific research continues to frame indigenous ways of knowing as “not good enough” for people outside of their communities or their cultural frameworks. In other words, the stark separation between the “clinical” and the indigenous uses of psilocybin mushrooms points to a larger issue: failing to recognize both the influence of indigenous experts and the legitimacy of mushroom use in indigenous settings.

The Western clinical setting might well be too distant from the religious settings that occur in the Oaxacan highlands. It is so distant, in fact, that it risks completely forgetting the origin and the history of ‘magic’ mushrooms. The path forward for Sabina’s “little children” should be grounded in their long history and the many people involved in their appreciation, understanding, and cultivation. Moreover, Western physicians need to properly learn of—and recognize—indigenous and non-American knowledge production.

This article was commissioned by Liz Bowen and Sharon Marcus.