What the Constitution Means to Us
On June 22, 1999, Jessica Lenahan’s estranged husband, Simon Gonzales, abducted their three daughters from outside Jessica’s house, in Castle Rock ... 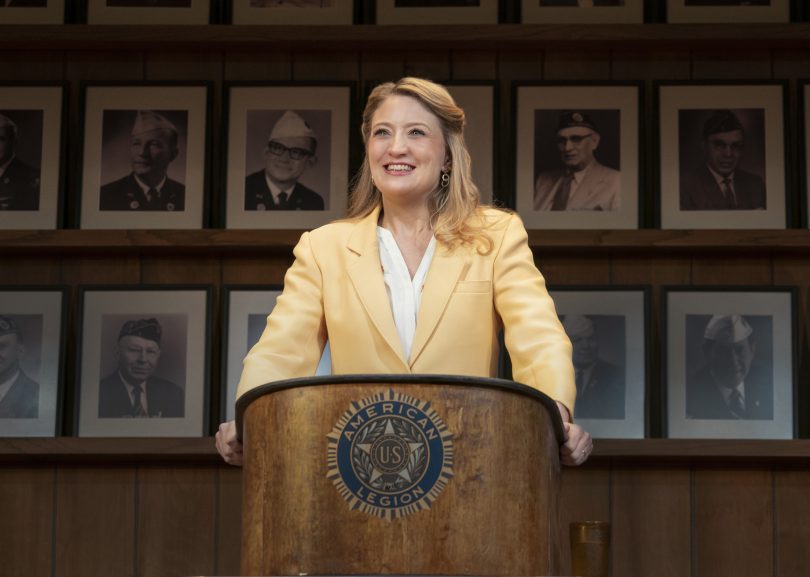 On June 22, 1999, Jessica Lenahan’s estranged husband, Simon Gonzales, abducted their three daughters from outside Jessica’s house, in Castle Rock, Colorado, in clear violation of a court order that required him to remain at least 100 yards from the family home. When Jessica returned home that evening and saw that her children were missing, she immediately contacted the Castle Rock police department and showed them a copy of the order.

Over the next 10 hours, Jessica would contact the police repeatedly, by phone and in person, desperately asking them to enforce the order and get her children back. Each time, the police took no action, instructing her to wait patiently for Simon to return the kids. At 3:20 a.m. the next morning, Simon drove up to the police station in Castle Rock and pulled out a semiautomatic handgun. He was fatally wounded in the ensuing shootout. Afterward, the lifeless bodies of Jessica’s daughters, whom Simon had shot before the gunfight, were discovered inside the cab of his pickup truck.

Jessica filed a lawsuit against the police, alleging that their failure to take action wasn’t merely illegal, but a violation of the United States Constitution. She argued that the town had an impressive track record of ignoring restraining orders, and that the 14th Amendment’s due process clause required that the police do something to protect her and her children from her abusive estranged husband. The Supreme Court thought otherwise. By a 7–2 margin, the Court held that the Constitution provided no protection for Jessica or her three dead children, and that the 14th Amendment’s guarantee of “due process of law” did not require the police to do anything to help her.

Jessica’s horrific story provides a centerpiece for Heidi Schreck’s fascinating play What the Constitution Means to Me, which premiered Off Broadway, in 2017, and is currently on Broadway in a limited run at the Helen Hayes Theater, until July 21. As a playwright and performer, the 47-year-old Schreck—alone onstage for most of the show—explores the many ways the Constitution operates in the everyday lives of people like Jessica, outside the rarefied world of courtrooms and law.

Switching between the present day and her experiences participating in constitutional speech competitions at American Legion halls three decades ago, Schreck’s take on constitutional law is unabashedly personal, showing us how abstract legal concepts play out in the intimate tableau of her life and the lives of four generations of women in her family. Her Constitution isn’t built solely for judges and lawmakers who live in a world of unfeeling logic and reason; it’s a home for citizens who live on the plains of emotion and feeling, metaphor and imagination, trauma and memory.

Schreck’s play reminds us that our Constitution operates on a time horizon well beyond the lifespan of a single person or political movement.

As a character in Schreck’s drama, the Constitution emerges as much more than a legalistic rule book: it’s a cultural conduit for the transmission of human suffering from generation to generation. We see this enacted onstage through her own history of inherited trauma and the seemingly remote judicial opinions that enabled intimate violence and unwanted pregnancies to proliferate in her family. The play is constitutional law told through a century of familial lore, a cultural canon filled with intensely personal tales of mail-order brides and death from melancholia and brutality at the hands of men.

What the Constitution Means to Me reminds us of something we all too often forget: our Constitution operates on a time horizon well beyond the lifespan of a single person or political movement. It’s epic in nature, a multigenerational saga like The Godfather or The Joy Luck Club. When the Constitution’s preamble stakes a claim to “posterity,” it envisions legal rules that are built to last for the long haul.

These rules carry weighty historical baggage that scars our lived experience, with present-day Americans functioning as cast members in a constitutional memory play. When antebellum abolitionist William Lloyd Garrison called the Constitution “a covenant with death” and “an agreement with hell” for its endorsement of human chattel slavery, or when Justice John Marshall Harlan used his lone dissent in Plessy v. Ferguson (1896) to claim that constitutional decisions teach us right from wrong, they are talking about a document that reinforces and perpetuates belief systems that last for generations.

Onstage in 2019, Schreck’s arc of inherited trauma recognizes the Constitution’s redemptive potential as well. In moments of hopefulness, she casts the document as a circuit breaker for the transmission of trauma, exploring the legal progress that gradually enabled American women to access birth control, obtain abortions, and assert equal treatment on the basis of sex.

Each of these developments become new branches in Schreck’s own family tree, helping to break cycles of subjugation that constitutional law had hard-wired into the matrilineal legacy of her clan. When the Supreme Court legalized access to birth control, in Griswold v. Connecticut (1965), or when it guaranteed women access to abortion, in Roe v. Wade (1973), it also broke ingrained patterns in Schreck’s family, allowing her to make very different life choices than the women who came before her. 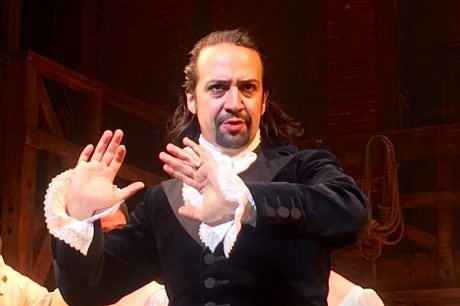 “Hamilton”: Who Tells Your Story?

The Constitution that lives outside the courtroom does far more than simply advance or inhibit familial dysfunction. At various moments, Schreck shows us a document that functions as both a cultural symbol for the world we’ve created and a launching pad for a collective conversation about what “a more perfect union” might look like.

Schreck invokes repeated metaphors to situate the Constitution in the rich realm of symbol, stripped of the intricacies of a legal code. At various points in the script, she calls it a “crucible” and a “witch’s cauldron,” conjuring up images of the Salem covens and Hecate’s crew in Macbeth.

The set, filled with framed black and white photographs of white male American Legion members, along with the occasional presence of a male debate moderator and Schreck’s choice to explicitly cast the audience in the role of male observers, encourages us to confront the fact that constitutional regimes sustain themselves not only through the coercive power of law, but through myth, iconography, imagery, narrative, and ritual. Metaphors are how cultures make meaning, and metaphorical choices transmit legal and cultural messages that help determine how power operates within a society.

Constitutional metaphors reflect the struggles of their times: 19th century constitutional theorists talked about the Constitution as “a machine that would go unto itself” to mirror the efficiency of the new industrial age, while 20th century theorists described the Constitution as an organism able to break from the constraints of the past and transform an automated system into a living thing. Present-day theorists have grown fond of using Ulysses and the sirens as their metaphor du jour, likening constitutional commitments to a sailor bound to the mast, carrying the ship of state though a sea of enchantresses trying to lure him and his crew to their deaths.

Here, Schreck flips the script, relying on gendered images that place women at the helm of the constitutional voyage. As onlookers, we are transformed into male sirens, obstacles she must navigate around as she inserts herself into debates about constitutional meaning that have long been dominated by men.

As a character in Schreck’s drama, the Constitution emerges as much more than a legalistic rule book: it’s a cultural conduit for the transmission of human suffering from generation to generation.

Toward the end, the play reveals its considerable aspirations for the role theater can play as a training ground for citizenship, a stage on which “the People” can perform their constitutionally assigned roles. When Schreck asks the audience to participate in a fully staged debate between her and an actual high school student about whether to abolish the Constitution and replace it with something better, it is not only a callback to the lyceum movement and Cooper Union debates of the 19th century—it’s an effort to build the audience’s capacity to assume the awesome responsibility of helping to construct constitutional meaning. As onlookers, we are asked to listen critically, empathize with a narrative, and reflect on our own ethical sensibilities; as citizens, we are asked to do the same things with far more at stake.

By embedding ultimate sovereignty in “We, the People,” the Constitution has always invited ordinary citizens to stake interpretive claims about the meaning of a charter that was never meant to operate under the sole dominion of legally trained elites. The Constitution doesn’t speak solely through dense judicial opinions; it makes itself known through the revolutionary pamphlets of the 18th century, the abolitionist newspapers of the 19th century, the suffrage rallies and civil rights marches of the 20th century, and the hashtags of the 21st.

American social movements have long chosen the constitutional form to express political aspirations, generate alternative visions of collective values, and redraft the social contract. John Brown chose to write a provisional constitution as part of his moral war on slavery, as did utopian communities and Confederate secessionists. They did so not only to identify themselves as separate and distinct political communities, but because constitutions provide the language for movements to articulate their social and political aspirations. Like the theater itself, the Constitution functions as a playground for our collective moral imagination. 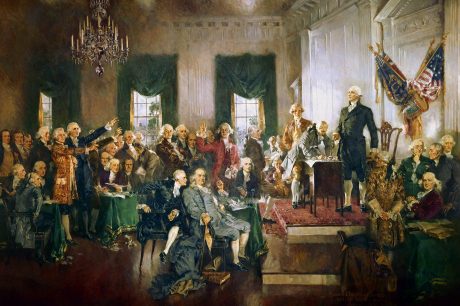 The Constitution: When Less Is More

Schreck’s imaginarium eventually leads us to the ultimate constitutive gesture: the gradual metamorphosis of the “me” in the title into an “us,” the transformation of a pluribus into an unum. By asking her audience to collectively conceive of what a better Constitution might look like, she is not simply attempting to repair America’s broken polis, but consecrating a new polity within the four walls of the Helen Hayes Theater.

Featured image: Heidi Schreck in What the Constitution Means to Me. Photograph by Joan Marcus 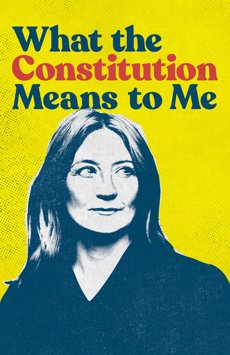 What the Constitution Means to Me