Where We Live Now
The family portrait is part of the immigrant tradition. An establishing shot for family history, they remind us of who we come from, who we love. 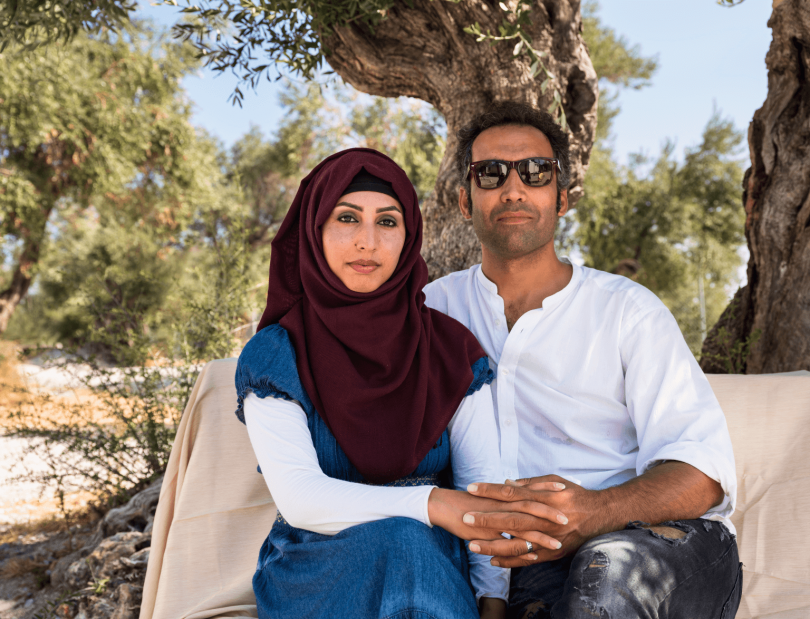 Family portraits travel through generations. They were folded into suitcases for the children of the Kindertransport, tucked into the leather pouches of immigrants climbing out of steerage onto Ellis Island, ziplocked in coat pockets of fathers clutching babies in lifeboats in the Mediterranean. When they land in frames and scrapbooks, when they are uploaded to the cloud, these images become an identity archive for future generations. These portraits are reminders of whom we come from, whom we love.

In the summer of 2017, I began working at the Kara Tepe and Moria refugee camps on the Greek island of Lesbos. That year, some 30,000 asylum seekers—predominately from Syria, Afghanistan, and Iraq—landed on Greek islands in small boats and rafts, seeking refuge in the EU. Most were families with children. As a mother, I could only imagine what had forced this decision. But they made it safely, and changed the course of their family history.

That boldness, to my mind, deserved recognition. A set of family portraits was what I could offer, printed and delivered to their door a few days later. They would have a record of this decisive moment and an artifact for future generations. The family portrait is part of the immigrant tradition, an establishing shot for family history. This image could become a prompt for family lore for generations to come.

The portraits were carefully considered. They were made in front of an ancient olive tree, with the Mediterranean and Turkey in the distance. Despite the fact that we were in a camp surrounded by barbed wire, and that some had made the crossing just days before, the families were beautifully turned out: mothers with makeup and little ones in bright, fresh clothes. Despite the dust and relentless heat, they posed with patience, grace, and humor. People were relaxed, connected to each other, and happily engaged with the process.

The portraits are intentional. Once people seek asylum on Lesbos, their future is in the hands of foreign governments that judge them by specific criteria. But in the portraits, families present themselves as they see themselves: strong, hopeful, committed to each other and a better life.

Recently I’ve visited families from the project who have been resettled in Germany. On Lesbos, everyone wanted to be in Germany. Lesbos was awful, they say. Life is better now. Residency applications are in process, the schools are good, and many have reunited with family members, which is an enormous comfort. The new portraits were done in government-regulated housing, which varies from charming houses in the countryside to urban dormitories.

The families still have the Lesbos prints. Some enjoy them; others say they’re too painful to look at, but keep them safe for another time. 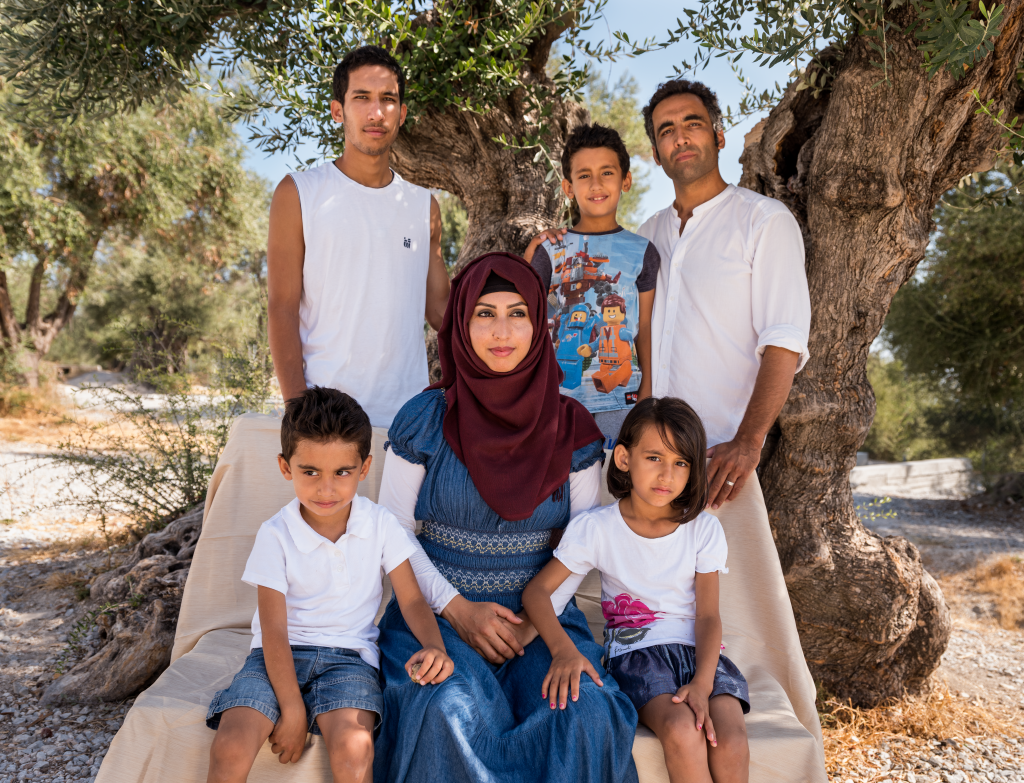 Shamsia and Naweed and their family. September 19, 2017: Lesbos, Greece. 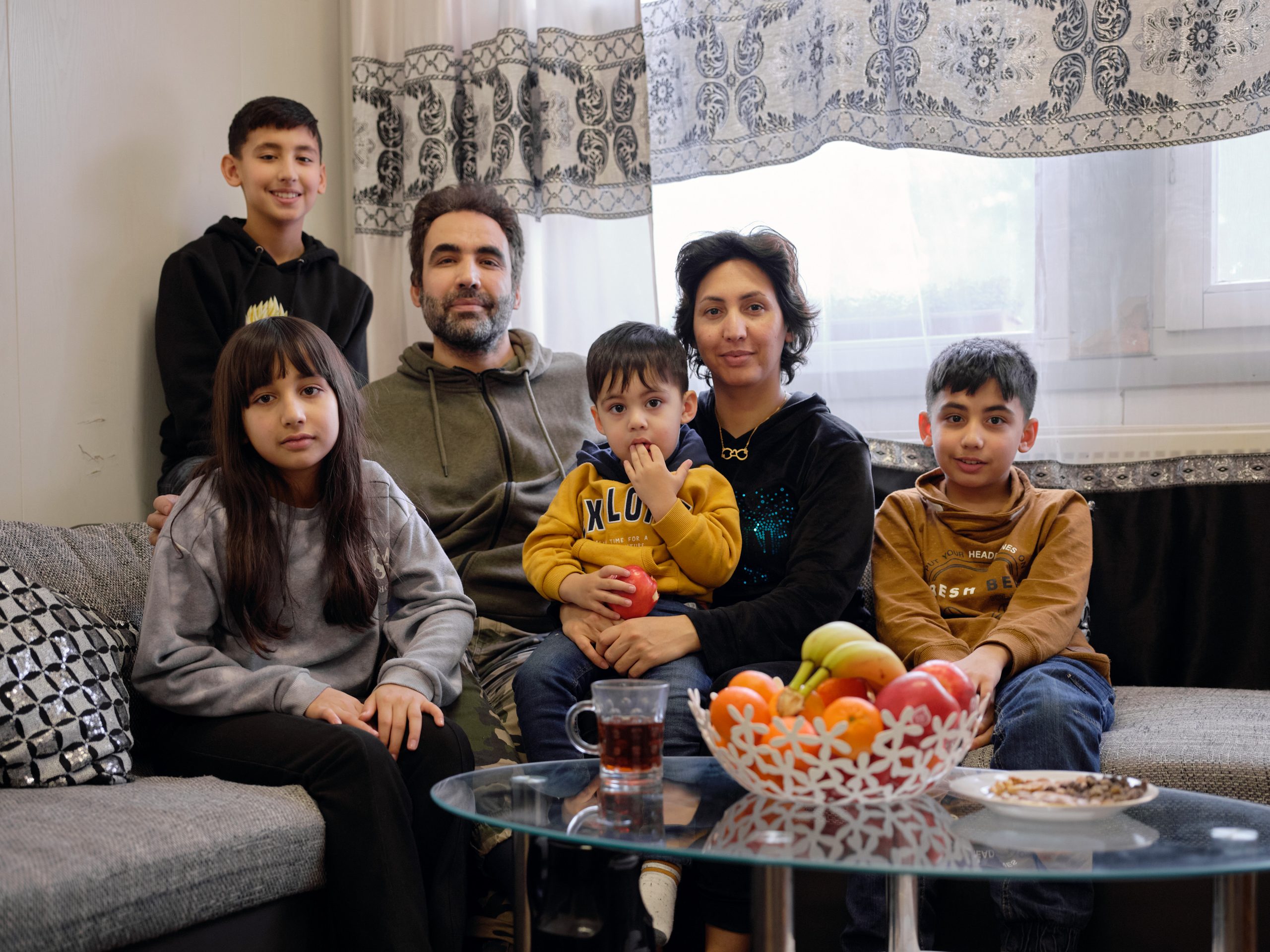 Shamsia and Naweed and their children. December 27, 2021: A government-sponsored house in the countryside near Brandenburg, Germany 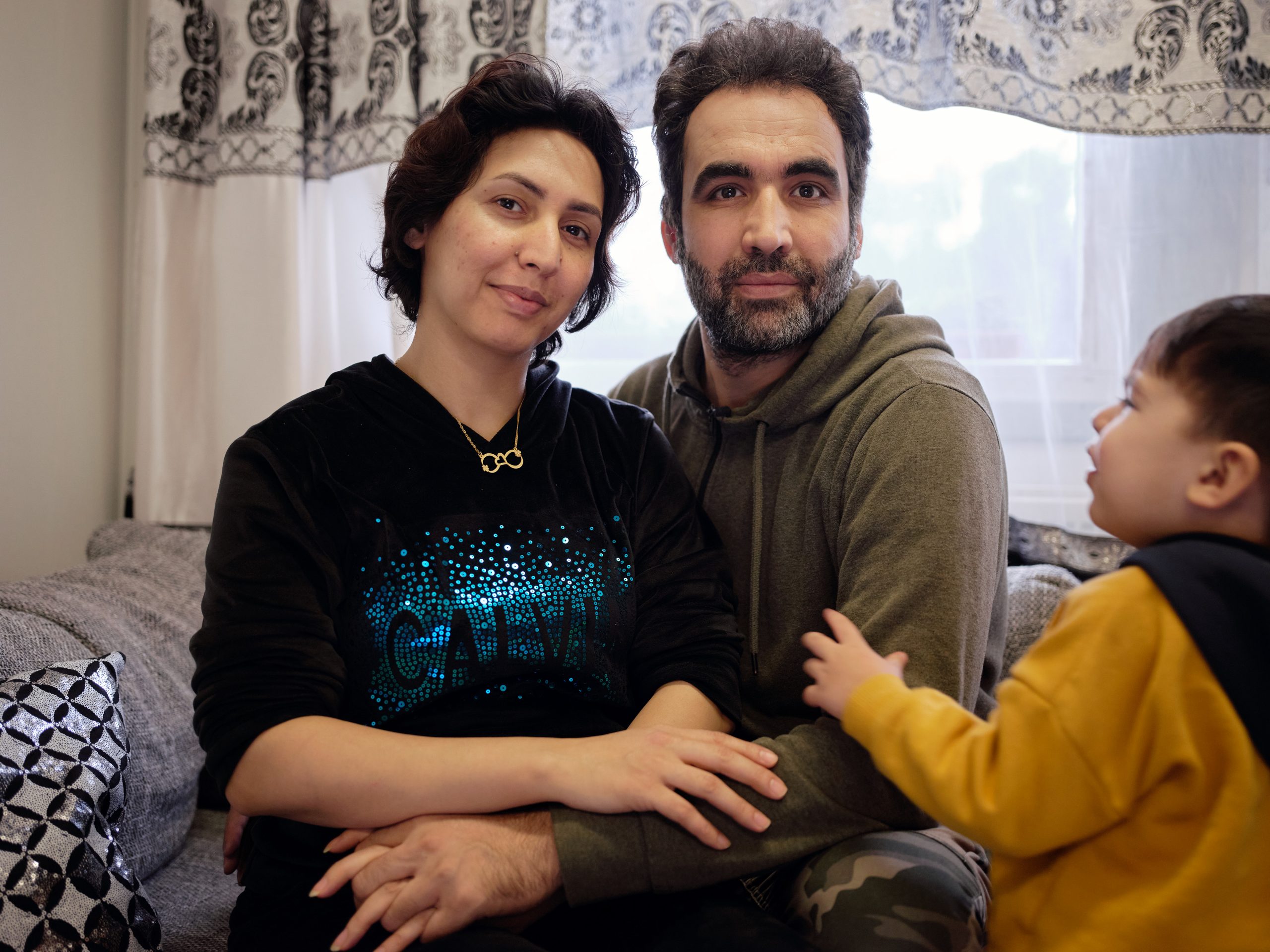 They hope to move closer to family in Berlin at the end of 2022. 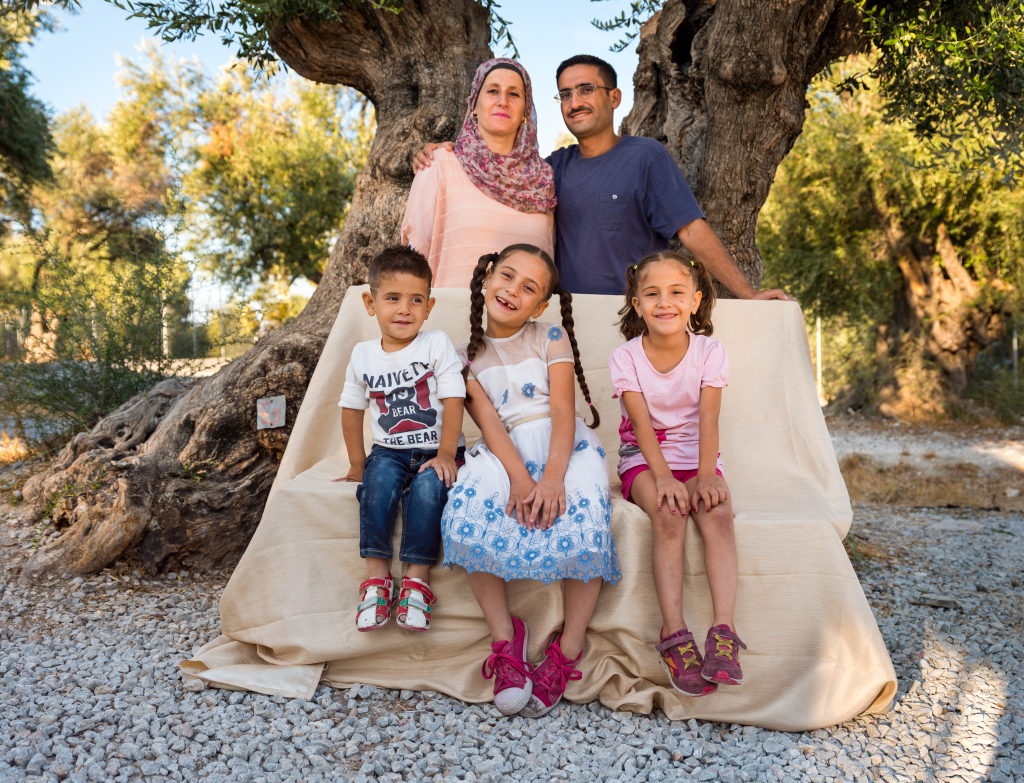 Idris and Yasmin and their children. September 22, 2017: Lesbos, Greece. 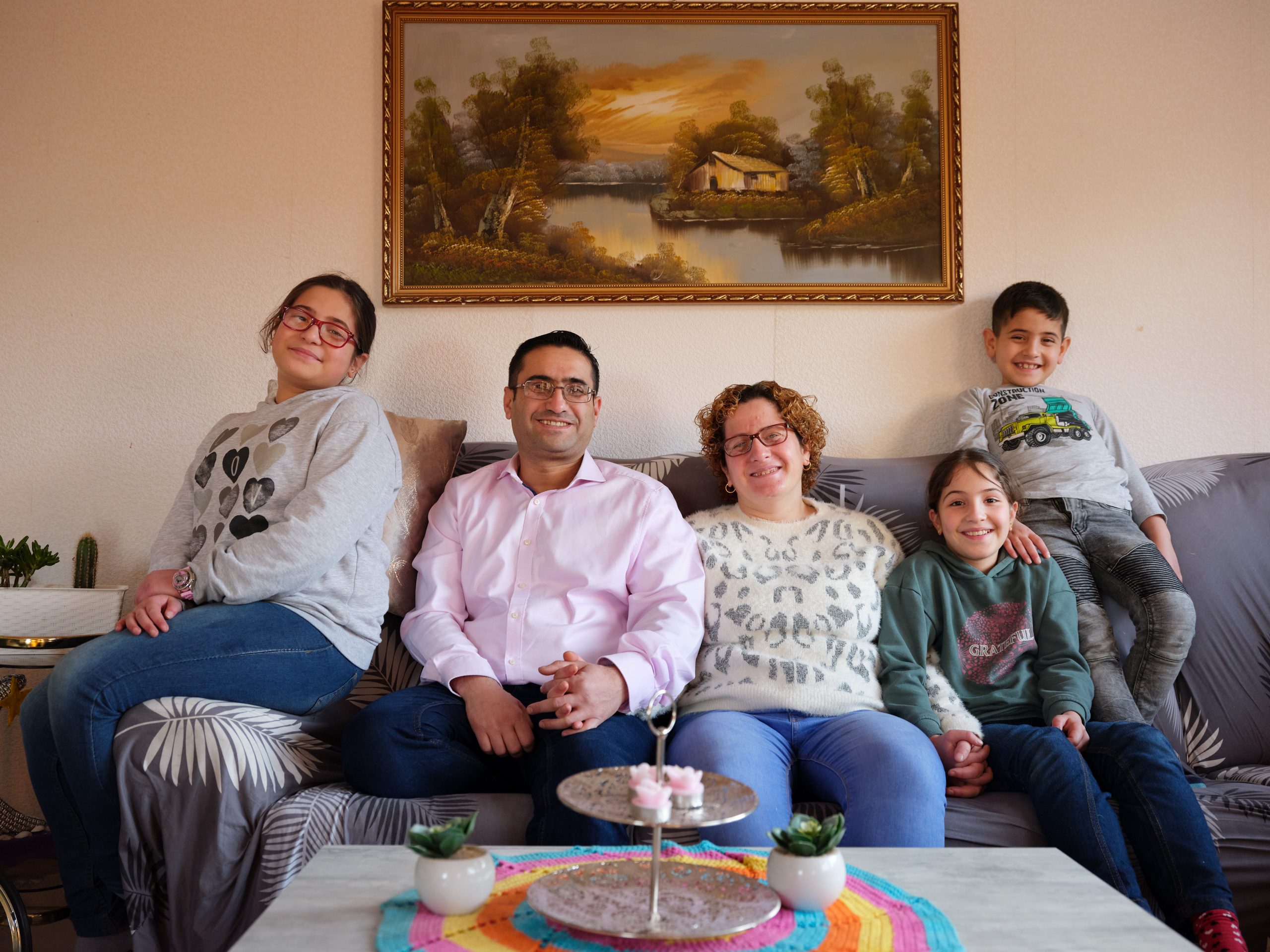 Idris and Yasmin and their children. December 8, 2021: A government-sponsored three-story house in Ahaus, Germany, in the countryside near the Dutch border.

They hope to settle in Ahaus, Germany permanently. 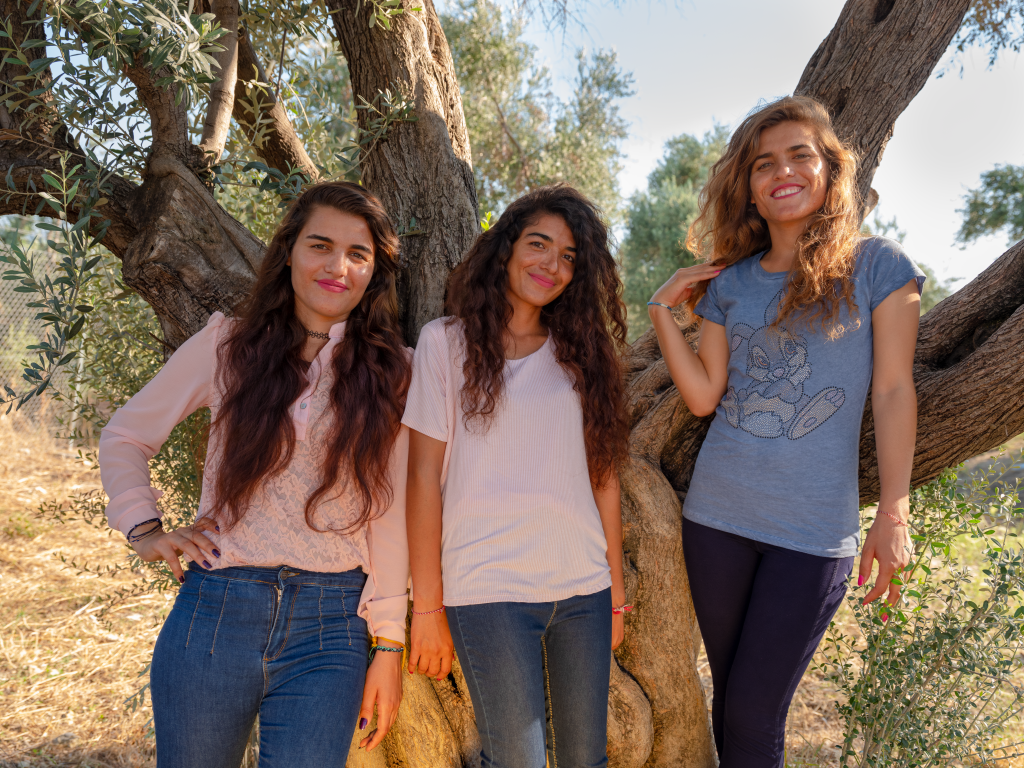 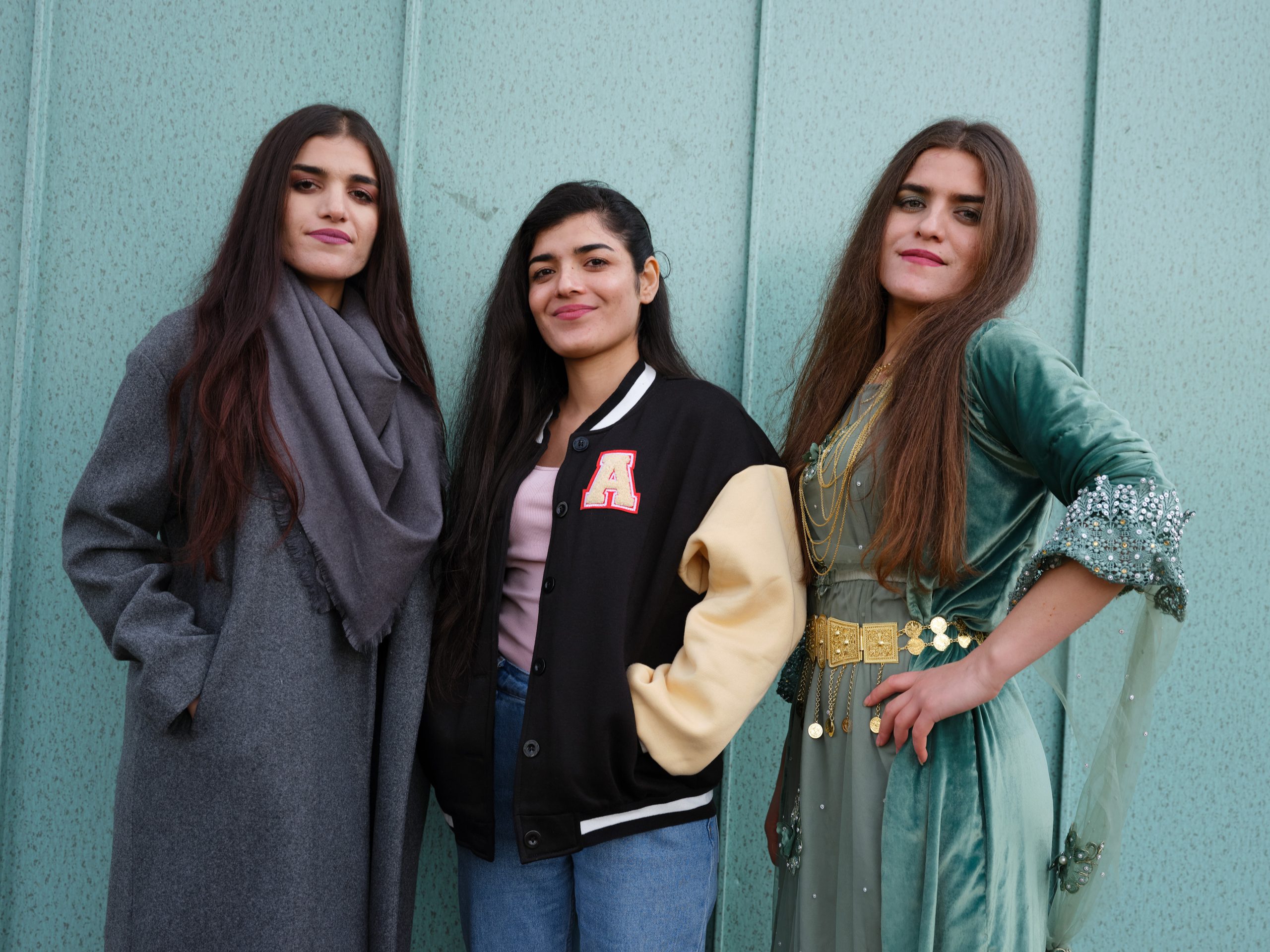 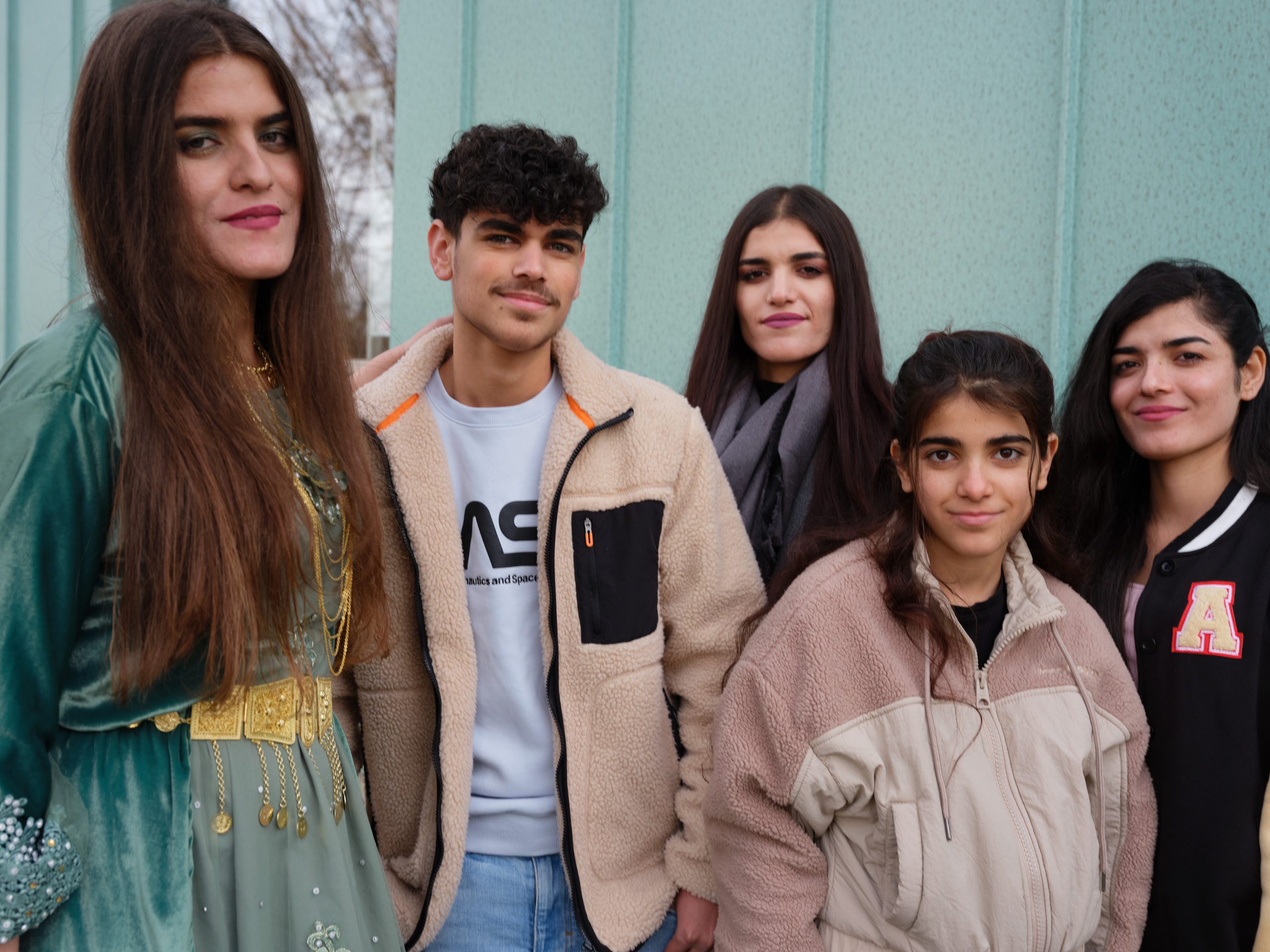 The sisters with two siblings, above, and their mother, below. There are twelve people in the immediate family. 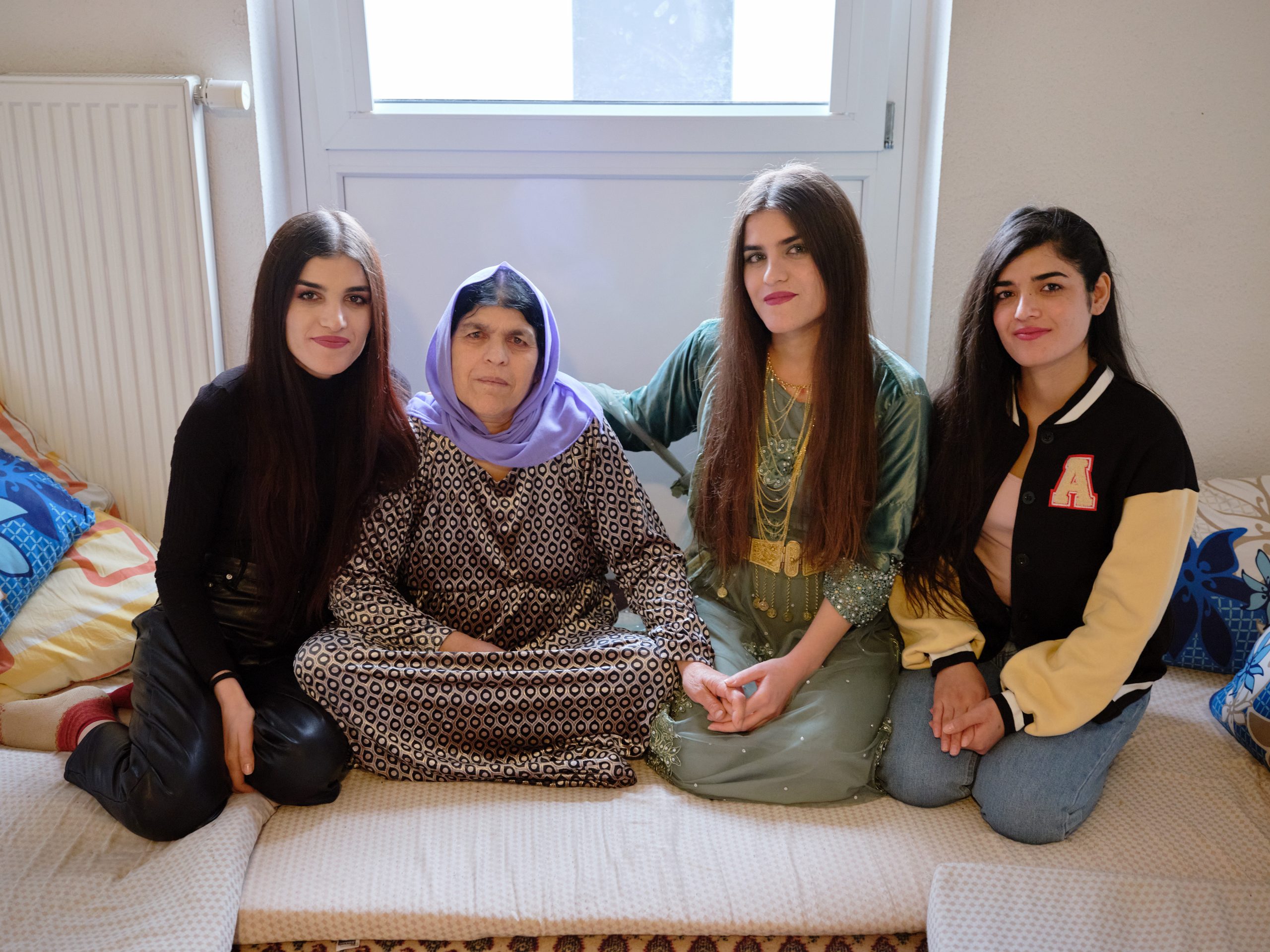 The family lives in a camp in Stuttgart, Germany. The sisters often visit from their camp in Augsburg, and hope to live all together one day.

Nazdar and her family 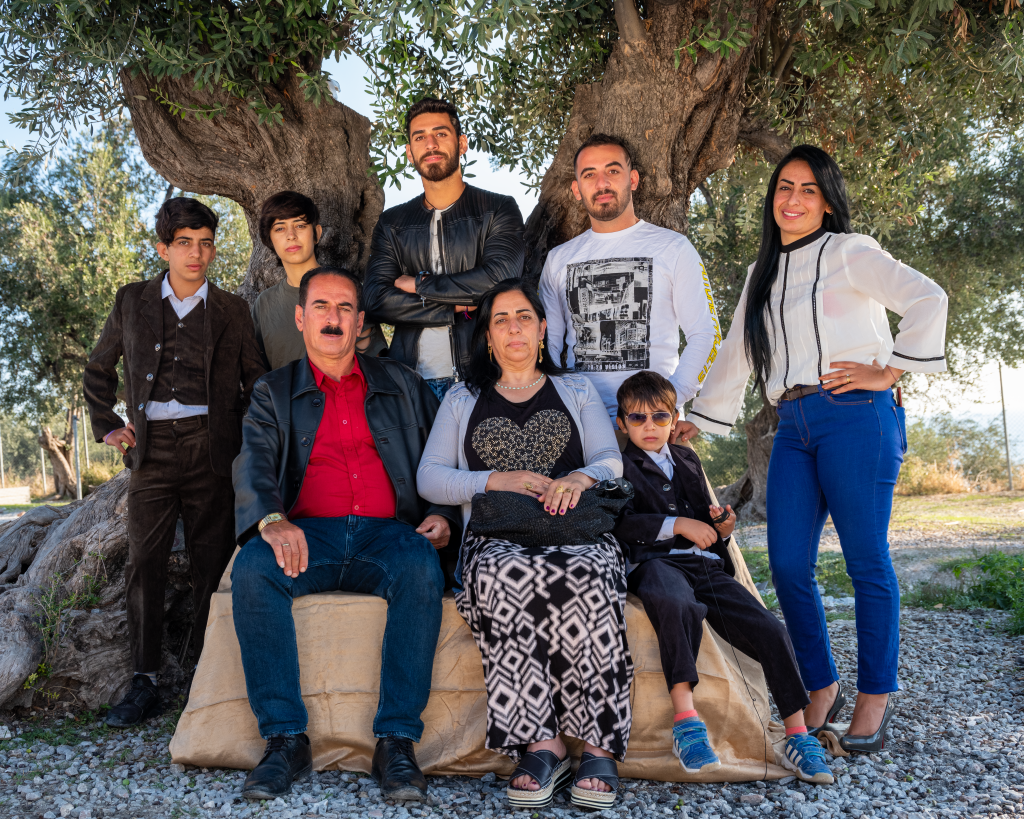 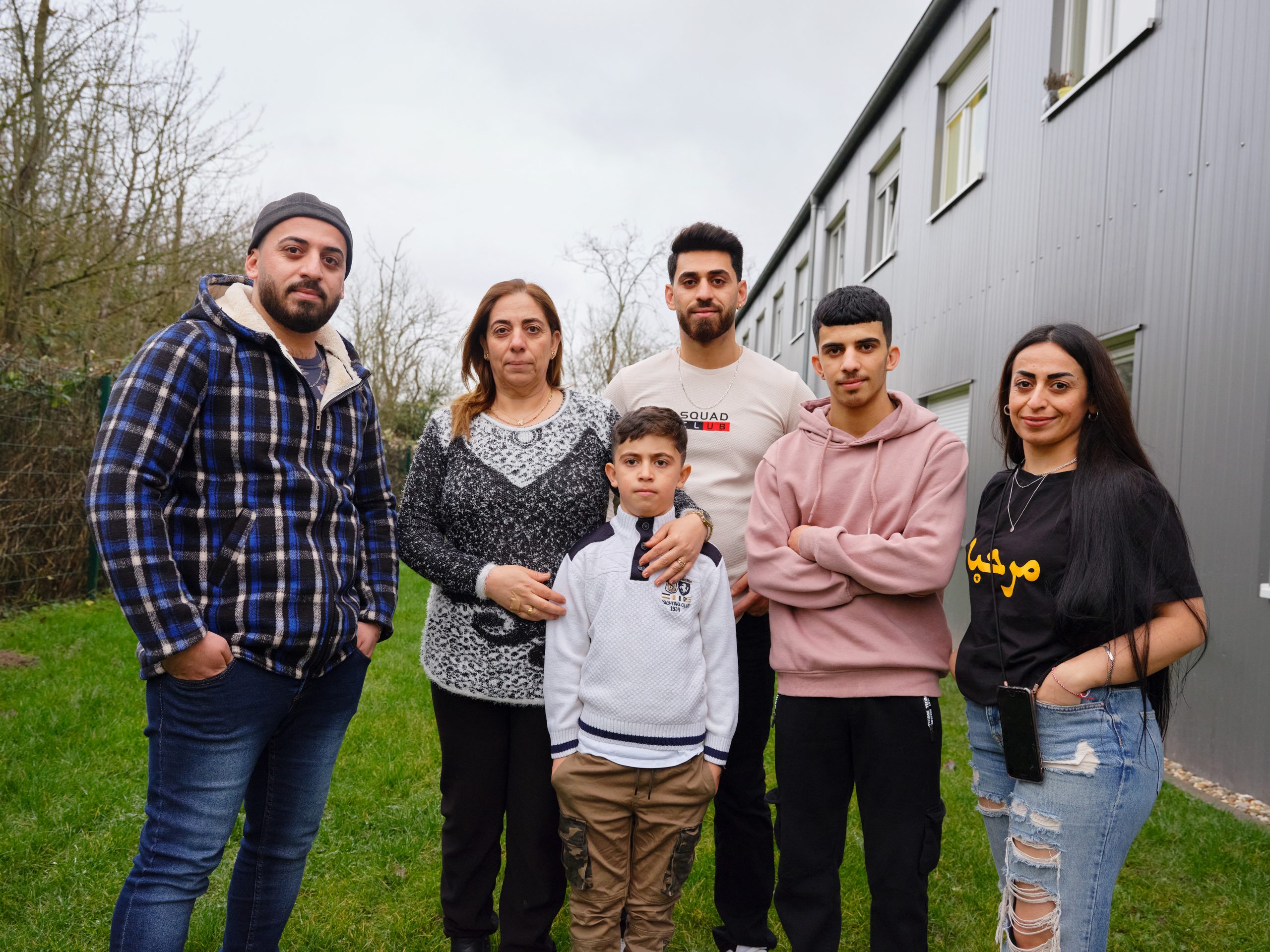 Nazdar, her brothers, and their mother. December 19, 2021: A camp in Hellerhof, Germany, near Dusseldorf.

They are currently waiting for a private home with room for all of them.

This article was commissioned by Jeremy Adelman and Caitlin Zaloom.