Who is General T?
By now the March 30, 2005 Powerball drawing seems to have taken on the workings of a tall tale: In a pot nearing $14 million, Powerball officials usually expect four to five second-place ...

By now the March 30, 2005 Powerball drawing seems to have taken on the workings of a tall tale: In a pot nearing $14 million, Powerball officials usually expect four to five second-place winners. This time, 110 players got five of the six numbers correct, winning anywhere from $100,000 to $500,000, depending on their original bets. How did the number of winners increase by 2,100 percent? Fortune cookies. The lottery players used the numbers found on the back of the duplicate paper slips inside their respective fortune cookies—28, 39, 22, 32, 33, and (the incorrect number) 40—that were shipped all across the United States. 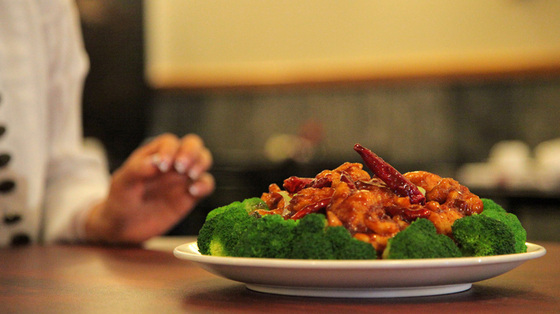 Still from The Search for General Tso

Jennifer 8. Lee’s book The Fortune Cookie Chronicles: Adventures in the World of Chinese Food begins with this story and ends with Lee traveling the globe in search of the “greatest” Chinese restaurant in the world (outside of China). The Powerball–fortune cookie connection serves as the illustration for Lee’s argument about Chinese food, and, more generally, Chinese culture. Following the lives of Chinese restaurateurs and the immigrants who are often at the helm of the restaurants, Lee explores the way in which Chinese food has become, in her words, more American than apple pie. Along the way, she asks questions about ubiquitous but often overlooked cultural phenomena. The most popular day to get married in Chinatown? Thanksgiving; Americans prefer turkey over beef with broccoli and it’s the one day of the year that Chinese restaurant workers always have off. Where did fortune cookies originate? Japan; they were sold in Japanese-run American candy shops before WWII at which time Chinese workers took over when Japanese Americans were interned. How did those pervasive white menus end up stuffed in every mail box and folded in every gate? That answer lies with the start of door-to-door delivery in the 1970s. Even though Chinese restaurateurs did not originate delivery service, they were the ones to bring it to everyday life: with the rise of both parents working Chinese food was a seemingly healthy alternative that could be delivered home. No cooking required.

Finally, the biggest question of all: how did fortune cookies and other “Chinese” staples like chop suey (“the greatest culinary prank that one culture has ever played on another,” according to Lee) and General Tso’s chicken come to represent China’s cuisine to Americans? The answer is a simple response to want and need. Chinese food in the US serves two purposes: it is foreign enough for Americans to deem it “authentic” but American enough to be seen as a form of comfort food. Like all food, Lee writes, it evolved to please the palates of the people who ate it.

Lee’s journalistic writing style—she’s a former reporter for the New York Times—adds a sense of storytelling to her quest. Over the course of the book, she follows several restaurant workers on their journeys through the Chinese-food industry, including an 18-year-old boy who spent two years and $20,000 of his family’s money trying to come to the United States and a man and wife whose tumultuous move to Georgia to start a restaurant fails and almost costs them their children. Such stories are also at the heart of The Search for General Tso, a new documentary produced by Lee and directed by the independent filmmaker Ian Cheney. Shown at the Tribeca Film Festival, the film uncovers the identity of the real General Tso (he was a 19th century military leader in the Qing Dynasty), traces the numerous incarnations of his name (in the Naval Academy dining hall the dish is “Admiral Tso’s Chicken”), and answers the question of why his name is associated with stir-fried chicken (although General Tso’s alligator is served in the Deep South), but it also quickly gets to the stories of the many Chinese immigrants and how they use food as an equalizer.

Cheney’s search for the history of the famous dish ultimately leads him to China and Taiwan, where he discovers that many people there have no idea what General Tso’s chicken is. While there, he meets with the dish’s creator, Peng Chang-kuei, who, upon seeing photographs of the American version with its sweet shiny glaze and broccoli and scallion garnishes, quips “this is all crazy nonsense.” Peng was a chef to the Nationalist Government who went to Taiwan after Mao’s takeover and invented the dish one night when requested by Chiang Kai-shek to make dinner. Peng’s original General Tso’s chicken uses thicker cuts of meat, has a heavier emphasis on soy sauce, and lacks the sweetness and relishes found in the US version. Cheney also finds the chef, Michael Tong, who popularized the dish in the 1970s in his Midtown Manhattan restaurant. This two-chef narrative directs the audience to the final question that the film asks: does it matter that General Tso’s chicken isn’t authentic?

The Fortune Cookie Chronicles: Adventures in the World of Chinese Food