Who Puts the Fun in Fun Home?
There’s something delightfully intimate about reading a graphic novel and seeing a story unfold across the panels, visualizing the world the way its creator does. Theater, however, doesn’t often ... 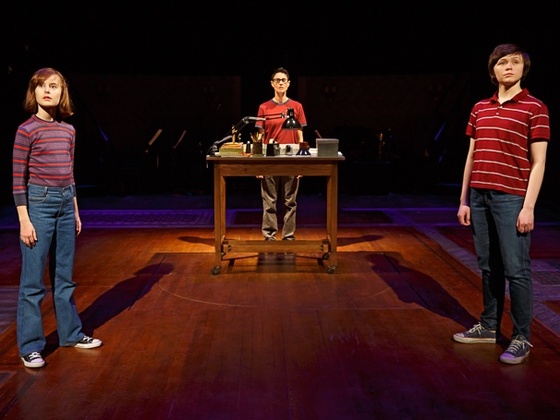 There’s something delightfully intimate about reading a graphic novel and seeing a story unfold across the panels, visualizing the world the way its creator does. Theater, however, doesn’t often afford its audience that luxury. What the audience sees is clouded by their own interpretations, the baggage that they carry with them through the doors. So it is with the musical staging of Alison Bechdel’s Fun Home. With Older Alison’s (Beth Malone’s) constant presence onstage, we realize that we’re never quite there in the moment, whether it’s the Bechdels’ museum-like home or Oberlin College in the Broadway production of Fun Home. We’re observers of this polished and primped family from Beech Creek, Pennsylvania, and Malone’s Alison is always standing on the periphery to make sure we don’t forget.

A short-haired, androgynous, 43-year-old Alison Bechdel is hunched over a drawing desk as the lights come up on the Circle in the Square’s theater-in-the-round stage. In the shadows around the edges of the set are her mother’s piano and her father’s beloved obelisk, which sits hidden and unreferenced on a side table — gentle visual nods to Bechdel’s autobiographical Fun Home. Yet this musical adaptation doesn’t quite capture the heart of the original. In this production, originally performed at the Public Theater and now resident on Broadway, there are moments where we do in fact see a running commentary from Older Alison’s eyes. As Medium Alison (Emily Skeggs) first vocalizes her sexual inclinations to the suave Joan (Roberta Colindrez), our current Alison groans in the background, her younger self stumbling through increasingly awkward confessions. While there’s the audience experience of either laughing at the poor girl or slinking down in their seat as memories flood in, Older Alison’s embarrassment reminds us that we aren’t watching a young girl going through integral life stages as they happen. We’re watching an artist reflect back on her life as she grapples with memories of her family, and, most significantly, the role of her late father in her life.

It is a challenge to bring a graphic novel’s panels off the page and onto the stage in a way that captures the effect of looking back on life at a distance, rather than in the moment. The stage production is careful to remind the audience of the story’s origin throughout, such as when Older Alison “captions” the scenes we are watching, or through the jumps in time that piece together in the end like a macabre puzzle. A slightly more on-the-nose reminder is when the floor beneath the characters lights in rectangles as they each express different sentiments in an attempt to replicate the busy pages of a graphic novel. And yet for all these moments when Fun Home nails the original “tragicomic” on the stage, it fails to capture the blasé attitude surrounding Bruce Bechdel’s death.

“Caption,” Older Alison begins the play. “Dad and I both grew up in the same small Pennsylvania town. And he was gay, and I was gay, and he killed himself, and I became a lesbian cartoonist.” Malone’s delivery captures every ounce of the graphic novel’s nonchalance. Bechdel is unfazed by death, not surprising given that the titular “Fun Home” is the family-run funeral parlor. She treats her father’s death no differently than she did the other deceased that passed through their door. In one particularly memorable panel, college-aged Alison tells her boss at the college library that her father has been hit by a truck and she must go home. His enquiries into Bruce’s well-being are met with a simple and awkward “Umm …” She later mentions that she genuinely cried for about two minutes, but that’s the height of the emotional level we see displayed in the panels.

For a while, the musical sticks to this level of detachment from Bruce’s death, acknowledging it casually as the rest of his sordid secrets are revealed. But as the musical progresses, so does the drama. Bruce (Michael Cerveris) and his wife, Helen (Judy Kuhn), are given powerful, classic ballads that both Cerveris and Kuhn perform excellently. But that’s all they really are, a way to showcase the talent of the two performers. Their two songs differ largely from the more whimsical numbers that comprise the rest of the musical. Young Alison’s observations of the butch delivery woman in “Ring of Keys” and Medium Alison’s morning-after declarations of love for Joan in “Changing My Major” are fresh and humorous and more closely resemble the tone of Bechdel’s graphic novel. Cerveris and Kuhn’s solos bring a gravity to the musical that ultimately makes this “tragicomic” a very serious piece in ways that perhaps it shouldn’t be.

While some of the more serious or emotional additions ring true—there is a lovely scene where Older Alison takes the place of Medium Alison to reflect upon the last conversation she had with her dad—for the most part, they are an unfortunate break from the sardonic tone the play begins with. There is a caption in Fun Home that reads, “They say grief takes many forms, including the absence of grief.” This absence of grief is what is missing from the musical adaptation. But that isn’t to say the musical is without merit or that the emotional components detract from the importance of Bechdel’s story. The publication of Fun Home, the graphic novel, was culturally significant for its genre innovation and for the topics it addressed, and staging that subject matter is a momentous occasion. At this year’s Tony Awards, Sydney Lucas performed “Ring of Keys,” a song about a little girl identifying with a woman that didn’t fit into the world of traditional femininity to an audience of over 6 million people. The musical may lack some of the key tonal elements, but the accessibility that Bechdel’s narrative now has—the story of Alison growing up and questioning her sexual identity—onstage, on screen, and in recordings, is a huge achievement, for both the book and the message in it.

Directed by Sam Gold, Book and Lyrics by Lisa Kron, Music by Jeanine Tesori
Circle in the Square Theatre