Wolves at the Door?
In the past month we’ve seen two different versions of the same phobic imaginative scenario. In it, a precious and vulnerable space, a space that must be protected, is invaded by an imposter, one in ... 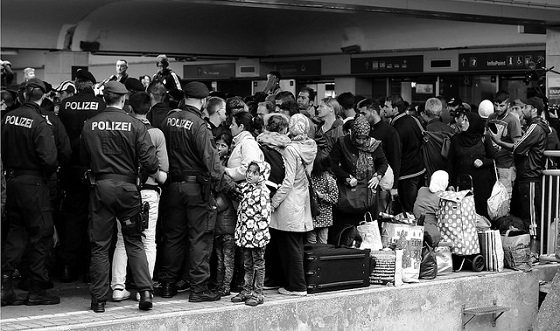 In the past month we’ve seen two different versions of the same phobic imaginative scenario. In it, a precious and vulnerable space, a space that must be protected, is invaded by an imposter, one in disguise, one who takes advantage of liberal sentimentality to enter under false pretenses and do terrible harm. According to the logic of the scene, the invading agent would, under normal circumstances, have been prevented from entering, but circumstances have arisen that allow him to hide his features, to pose as someone else, to sneak past the barriers. Perhaps no one has evoked such a fear more vividly than John Milton in book 4 of Paradise Lost, describing Satan entering Eden (and subsequently disguising himself first as a cormorant, and then as a toad):

As when a prowling Wolfe,

Whom hunger drives to seek new haunt for prey,

In hurdl’d Cotes amid the field secure,

Leaps o’re the fence with ease into the Fould:

Or as a Thief bent to unhoord the cash

Of some rich Burgher, whose substantial dores,

In at the window climbs, or o’re the tiles;

So clomb this first grand Thief into Gods Fould.

Milton seemed to recognize that we find invaders most frightening when they are furtive, disguised; not breaking down our “substantial dores” with force, but sneaking around them.

Most recently, we’ve seen this fearful imaginative structure in the calls of 25 Republican governors, and many other conservative pundits and presidential hopefuls, for a complete ban on all Syrian immigration to the US. Ted Cruz declared it “absolute lunacy” to allow significant numbers of Muslim refugees from Syria: “Who in their right mind would want to bring over tens of thousands of Syrian refugees, when we cannot determine, when the administration cannot determine, who is and isn’t a terrorist?” Marco Rubio added, “Here’s the problem. You allow 10,000 people in. And 9,999 of them are innocent people feeling oppression. And one of them is a well-trained ISIS fighter. What if we get one of them wrong? Just one of them wrong.”

Just a few weeks ago, we saw another version of this dynamic play out in very different circumstances. On November 4, voters defeated the Houston Equal Rights Ordinance (HERO), designed to prohibit discrimination on the basis on sexual orientation and gender identity on the part of restaurants, hotels, and other places that serve the public. Opponents of the ordinance released a now-infamous 30-second ad spot that many believe led to its defeat. The ad shows a dark-skinned man in a plaid shirt entering a women’s bathroom as a narrator warns, “Any man at any time could enter a woman’s bathroom simply by claiming to be a woman that day.  No one is exempt.  Even registered sex offenders could follow women or young girls into the bathroom.  And if a business tried to stop them, they’d be fined.” As frightening music builds, we see a young girl in a knee-length skirt, wearing a school backpack, walk into the bathroom and enter a stall. As she does, the man in the plaid shirt we saw in the first frames exits the next stall and swiftly slips into the girl’s. This brutally efficient horror movie concludes with the girl looking up at the camera as we see the man’s body fill the frame—and then the door to the stall slams shut.

With the surprise defeat of HERO, this ad seems destined to join George H.W. Bush’s “Revolving Door” anti-Dukakis spot as one of the most effectively fear-mongering advertisements in modern memory. No matter that there is no evidence whatsoever for the implication that transgender non-discrimination laws give sexual predators access to women’s restrooms—that, in fact, no one can point to even a single example of such a case. The ad, preying on still-widespread misunderstanding of transgender people, cynically but effectively triggered a basic human fear of the imposter who comes in disguise: a man pretending to be a woman in order to harm women.

In this phobic structure, sex offender is to transgender woman as terrorist is to refugee: in each pair, the first poses as the second in order to gain unlawful entrance to the vulnerable protected space, aided and abetted by naïve tolerationist policies. Of course, there are important differences. The figure of the sex offender posing as a transgender woman appears to be pure invention, whereas a terrorist gaining entrance to the US by posing as a refugee is certainly theoretically possible (albeit highly unlikely, given the stringency of the existing review process). Yet it’s hard not to see the conservative calls to ban every single Syrian refugee from entry to the US—even orphaned toddlers—as motivated by more than tough-minded realism. Behind such calls, I suspect, lies a primordial fear of the invading imposter. We may admire Odysseus for the clever trick he used to sneak into Troy, but we dread the possibility of ourselves acting as the Trojans did, credulously letting in the one who plans to destroy us.

Of course, there are in fact prowling wolves out there, those who would (in Milton’s words) disdain “due entrance” and instead, “in contempt,” “leap all bound” in order to enter our homes and spaces, “devising Death.” But fearing made-up monsters does nothing to protect us from real ones. Just a few days ago, we saw a zealot with a rifle storm a Planned Parenthood clinic, murdering three inside.  He wore no disguise at all.