Passing Beauty
How do you break a spell? How do you get over the grief of racial, gendered, and childhood injuries? Helen Oyeyemi’s novel Boy, Snow, Bird is not a black-and-white parable but a black-and-blue story ... 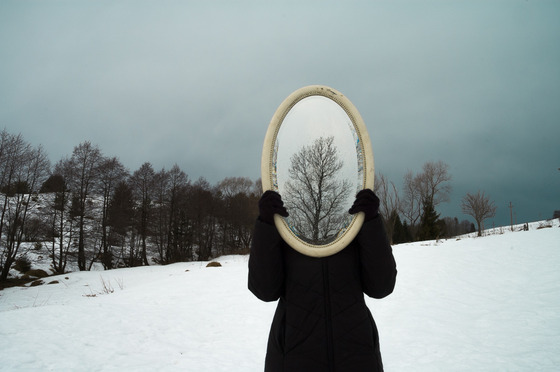 How do you break a spell? How do you get over the grief of racial, gendered, and childhood injuries? Helen Oyeyemi’s novel Boy, Snow, Bird is not a black-and-white parable but a black-and-blue story. A bruising tale about miscegenation, passing, and beauty, this novel brings to life the idealization and wounding that haunt the American racial psyche, and suggests that the price we pay for this history is nothing less than our own reflection.

Imagine a collision (or a collusion) between Anne Sexton’s Transformations, Nella Larsen’s Passing, and Elizabeth Taylor’s striking and stricken face in the 1957 film Raintree County. The tortured hybrid that would result might resemble Helen Oyeyemi’s new novel Boy, Snow, Bird. What brings these three unlikely predecessors to mind is not simply Oyeyemi’s haunting fusion of passing narratives and fairy tales but also the way this Nigerian-born British novelist harnesses the sonic, the textual, and the cinematic to produce an uncanny world in which the quotidian tips effortlessly into the surreal and vice versa.

In Oyeyemi’s version, Snow is the beloved, glowing, blonde girl-child of a jewelry maker named Arturo Whitman, and Bird is her dark-skinned half sister, whose birth exposes the Whitmans as light-skinned African Americans who have been passing as white. The wicked queen is the young bride and new mother named Boy who marries into the Whitman family without knowing their secret and who herself is the victim of a horrendously abusive childhood. The narrative voice shifts between Boy, whose first-person narration opens and closes the book, and her biological daughter Bird, who offers us her point of view in the middle section of the book and who in a sense speaks for her missing sibling, as Snow’s voice comes to us through a series of letters between the half sisters recorded by Bird.

Set in the 1950s in the Lower East Side of Manhattan and an imaginary Massachusetts town named Flax Hill, this novel about miscegenation exposes and confounds what we think of as “passing.” Here acts of passing are never final: they expand, veer off, and contaminate. They also take place across genre, gender, and class, not only racial lines. The Whitmans aspire to middle-class white gentility, while Boy, on the run from her violent “rat catcher” father, aspires to cover over her wounded childhood by seeking a “normal” life in which she can have “a role with lines [she] can say convincingly.” As Boy says chillingly on her wedding day, “Becoming Mrs. Whitman was a quiet affair that I didn’t have to diet for.” All this takes place in Flax Hill, whose diligently self-made blondes live up to the town’s name. Almost every character in this dark, enchanted tale labors to perform normality, in the process exposing the perversities that produce norms. For Oyeyemi, building a halfway decent life means erasing your past and having a family means suppressing desire or exiling love.

Almost every character in this dark, enchanted tale labors to perform normality, in the process exposing the perversities that produce norms.

Miscegenation and passing provide the primal scenes of American racial anxiety. In Boy, Snow, Bird they become more than themes: miscegenation and passing also drive the novel’s fundamental imagination and its modes of narration. The novel is replete with sly passing metaphors. One character describes another as “seventy percent all right and thirty percent pain in the neck” as if the deep logic of hypodescent—the discriminatory assignment of racialized identities based on a pseudoscientific calculus of “blood percentages”—has been displaced onto a casual personality assessment. Passing appears in other forms as well: Bird, the sister who does not pass racially, nonetheless possesses a gift for vocal mimicry that allows her to pass sonically; a woman named Boy desperately tries to perform motherhood; and extraordinary violence, such as pulling the eyes out of captured animals for no apparent reason, or simply punching your child in the kidneys as you walk by, passes as quotidian practice.

It is as if the “original sin” of the Whitmans, their “crime” of miscegenation and subsequent acts of racial passing, is but one symptom of a much larger proclivity for boundary-crossing in this imaginary world. Even the fundamental distinction between what is human and inhuman threatens to undo itself. “And so the town misbehaved a little, collapsing when I went to sleep and reassembling in the morning in a slapdash manner.” Similarly, wearing a snake-bracelet can taint a character’s motivation, and giving someone a birdcage with a broken door can repair broken ties. In this world, jewelry, letters, buildings, and even towns can exert desire and animacy. The novel’s restless tendency to personify inanimate things as having human characteristics makes one feel as if the very distinction between persons and things has been placed in jeopardy. We are reminded that passing and the racial history to which it gestures are also a history of struggle over who is a person and who is a thing. If slavery and the dark history of race that it bequeaths have meant the legal and systemic transformation of persons into things, then this novel seems intent on exploring what happens when things do not remain things.

It makes sense that this traumatic story of prejudice and betrayal should be told through the frame of a fairy tale, because witchcraft and passing are both forms of sympathetic magic: you become what you imitate, and contact means complicity. Acting like someone or something else becomes more than an act; it enables deep identifications. This brings us to the real romance in the novel: not between man and woman but between Boy and her stepdaughter, Snow. The novel suggests that Boy is initially more enthralled by Snow than by her father. The two women appear almost as doubles for one another: both are pale blonde girls who grew up without mothers. Boy’s desire to become Snow’s mother, so much stronger than her desire to become Arturo’s wife, is also a desire to reconstitute a missing maternal presence.

But identification also contains desire and envy. Boy, “halfway to smitten” with Snow, is inextricably drawn to this girl-child whose beauty makes “everyone who loved her [fall] over themselves” and complicates Boy’s decision to exile Snow after Bird’s birth. Boy presents her banishment of Snow as a choice to protect Bird from being overshadowed and made invisible by Snow’s dazzling beauty. But is Boy trying to protect her daughter or herself? Given that Boy recognizes more of herself in Snow than in her own daughter, and that she, too, cannot look away from Snow, we cannot help but wonder whether Boy has chosen to excise or repress a part of herself. By sending Snow away to live with black relatives, Boy may be casting a curative and punishing spell of her own: at once outing and closeting the white light that is Snow.

It is through the theme of female beauty that Oyeyemi most poignantly suggests that the intersection of race and gender produces, above all, an entwined education of desire. Whom we love; what we value; how hate teaches preference—these are all lessons instilled by racial and gender ideals. Boy, Snow, Bird reminds us of beauty’s injuries—its gendered biases, its powers of objectification. Whiteness connotes beauty, and bewitching female beauty equals useful commodity in the economy of marriage. But the novel also raises the possibility that the experience of beauty may be more unruly than the racial and gender standards that it is so often solicited to validate, that beauty might offer an active, confounding confrontation with the self.

This may explain why Oyeyemi explores the conjunction of beauty and passing by means of a series of idiosyncratic yet heartbreaking mirror scenes. For the female characters in this novel, standing before a mirror provokes odd and broken perspectives, uncanny experiences that drive them to ask not how others see them but whether they can detect or recognize themselves at all. The blonde Boy’s preoccupations with looking at herself in mirrors and her dark daughter’s impaired relationship to mirrors in which, vampire-like, she sometimes cannot see her own reflection, turn out to be continuations of the same desire: to experience self-affirmation in the face of social erasure.

The spell cannot be broken because it is still being written.

Oyeyemi offers us fresh insight into the connection between beauty and passing. Hers are not the usual narratives of passing, in which either beauty enables one to pass or whiteness confers beauty. Instead, her novel presents beauty and passing both as ways to achieve social visibility that paradoxically offers its performers the shelter of privacy and interiority. In the original Snow White tale the mirror offers a trope of vanity: who is the fairest of them all? Oyeyemi transforms the mirror into a site that reflects the crisis of female subjectivity, of deadly rivalry and equally deadly identification. We might even read this imaginative story as a revision of Freud’s argument that narcissism belongs to the special purview of “women, small children, and large birds of prey.”1 Here, mothers and daughters, women and “birds,” struggle to see themselves—not to affirm their beauty but to see if they are there. Social mirrors are everywhere in this novel—a chance glance on the side of a shining teapot, a word from a parent, a gift from a sibling all aim to shape the female characters’ self-apperception. To turn to one’s own mirror is not to seek gratification but the hope of self-confirmation.

The poet Elizabeth Bishop tells us that “the art of losing isn’t hard to master.”2 Boy and Bird master this negative lesson. In this novel, mothers are injured daughters who become wounded and damaging mothers. The spell cannot be broken because it is still being written. One’s only hope may be a dark one: that the hurt will pass or be passed on. Ernst Bloch tells us that fairy tales were originally “radical theory,”3 political narratives about freedom and happiness. The brutal final act of Hansel and Gretel, for example, in which the children push the “devouring mother” into a burning pit, is about “total happiness” and the right to “look upon the outcome of things as friendly.” Oyeyemi’s narrative is political, but it’s not about freedom, and she withholds a happy, friendly outcome. The novel ends on the brink of a journey, with Boy about to discover yet another buried act of passing that might further alter her relationship to her two daughters. Oyeyemi neither gives us a comfortable moral nor allows us to dwell in the dreaming that fairy tales encourage. Instead, she offers her own brand of radical theory: the proposition that transformation may be the only mode of survival in the enchantment of grief.