Monsieur Zierold’s Guide to Paris
This is the latest installment of Public Streets, a biweekly urban observations series curated by Ellis Avery. The typed index card in Fielding’s 1956-57 Travel Guide to Europe smells old, and its ... 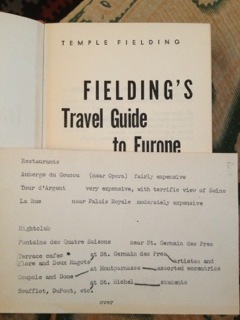 Monsieur Zierold is the card’s author.

One side reads Restaurants and then lists three suggestions: Auberge de Coucou (near Opera) fairly expensive, Tour d’Argent very expensive, with terrific view of Seine, and La Rue near Palais Royal moderately expensive. Of the restaurants, only the Tour d’Argent remains. It is very expensive, not moderately or fairly. Then, below, an idea for a nightclub: Fontaine des Quatre Saisons near St. Germain des Pres. The Fountain of the Four Seasons, sculpted under the reign of Louis XV, can be found in the 7th arrondissement, but there’s no nightclub by this name near the church of Saint-Germain-des-Prés in the 6th, at least not anymore. Perhaps the club had an ornate fountain. Perhaps it never existed, or it had a slightly different name.

He also lists six terrace cafes: Flore and Deux Magots near St. Germain des Pres are populated by artistes and assorted eccentrics, as are Coupole and Dome at Montparnasse. Sufflot, Dupont, etc. at St. Michel are filled with students. Etc., he says. There are so many student cafes. Etcetera. Monsieur Zierold no doubt preferred assorted eccentrics. And he spelled “artistes” in French, a mistake—the “e” thrust up from the part of his memory that holds his French past.

He drew thick pencil lines between the café names, the neighborhoods, and the clientele. The lines are carefully considered. Short and deliberate. They seem to be a kind of map, a way of translating the city. Next to Terrace cafes, he has crossed out a stray typo. At the bottom of the card, right in the middle, he offers a gentle command: “over.” 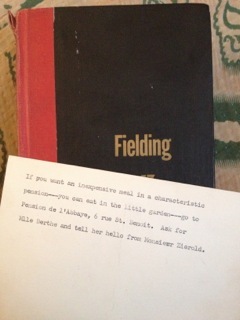 On the other side, he writes in more detail: If you want an inexpensive meal in a characteristic pension—you can eat in the little garden—go to Pension de l’Abbaye, 6 rue St. Benoit. Ask for Mlle Berthe and tell her hello from Monsieur Zierold. He uses three hyphens for a dash, and he started typing the word “you” with the letter “o,” which was then erased, but not very effectively. The “o” is another way the sentence might have gone, the remnant of another thought.

Perhaps his job took him to Paris. Perhaps someone recommended the pension to him. Perhaps Monsieur Zierold and Mlle Berthe no longer exist.

The pension is characteristic. Typical. But also defined by its character. It is Monsieur Zierold’s home abroad. The residents picked up their letters when they came home in the afternoons and evenings and then sat outside and read them, and drank glasses of red wine.

The pension no longer exists; now, it’s an apartment building. There’s a cafe next door—Le Petit Saint Benoit—and across the street, a handbag store. The building is a weathered white with a green door. Above the door hangs a brass number: 6. A tree stretches its branches over the top of the courtyard wall. The garden. You can eat in the little garden.

The book doesn’t contain any other index cards. It contains no notes in the margins. No signature on the endpapers. No train or metro tickets. No receipts.

Zier is ornamental. Flowering. Dekorativ. Decorative like little lines of pencil on an index card. Like the word “Rest,” which he started to write on the other side of the card, down from the right corner, and then erased. Like the oil paintings that hung on the walls of the pension. Like the upholstered chairs in the sitting room. Like the plates on which Mlle Berthe served dinner.

Monsieur Zierold enjoyed fine meals, but sometimes he preferred an inexpensive meal. Tour d’Argent revealed the whole city to him, stretched out in a vision, but the pension was comfortable and ordinary. He was called Monsieur Zierold in Paris, at the pension. Tell her hello from Monsieur Zierold—not from me, but from another self, from a self that belongs to the city.