Some Men Do
When I first read Rebecca Solnit’s essay “Men Explain Things to Me,” I was reminded of an evening more than 20 years before, when I was studying abroad in Oxford. Another student had brought me along ... 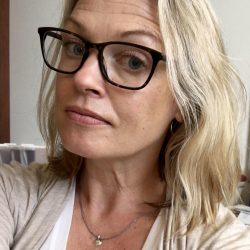 When I first read Rebecca Solnit’s essay “Men Explain Things to Me,” I was reminded of an evening more than 20 years before, when I was studying abroad in Oxford. Another student had brought me along to a meeting of the C. S. Lewis Society. The Society’s meetings were held in the Eagle and Child pub, the legendary haunt of the Inklings, where Lewis, J. R. R. Tolkien, and other gentleman scholars used to gather and talk about books. As the evening progressed, I found myself cornered by an American Rhodes scholar who felt the need to explain to me at great length who C. S. Lewis was.

As he droned on, my mind flashed back over childhood readings and rereadings of all of the Narnia books, as well as teenage explorations of Lewis’s life and works: Mere Christianity, The Screwtape Letters, the biography by A. N. Wilson. I had known something about C. S. Lewis since I was six years old and had seen fit to investigate him for myself as I grew up because I was curious.

The Rhodes scholar could have begun by asking, “Do you know who C. S. Lewis was?,” according me the authority to answer for myself. Instead, he saw a young, blonde, female audience, a vessel for his knowledge. When he finally drew breath, he noticed that I was not spellbound by his erudition. “Why are you laughing?,” he finally asked. “I’m laughing because you thought you needed to tell me who C. S. Lewis was,” I said. I was not invited back to another meeting.

Solnit, it seems, has better manners than I do. In “Men Explain Things to Me,” now the title essay in a new collection, she relates this anecdote from a decade earlier: at a party near Aspen, the wealthy and influential male host asked her—“in the way you encourage your friend’s seven-year-old to describe flute practice”—to tell him about the books she had written. She chose to tell her host about the most recent of her books, a study of the pioneering 19th-century photographer Eadweard Muybridge.

He cut me off soon after I mentioned Muybridge. “And have you heard about the very important Muybridge book that came out this year?”

… He was already telling me about the very important book—with that same smug look I know so well in a man holding forth, eyes fixed on the fuzzy far horizon of his own authority.

It’s worth noting that Solnit does not suggest, here or anywhere else in the essay, that all men engage in this practice of “holding forth.” This man, however, certainly does. He is so caught up in displaying his expertise (about a book he has not read, but merely read about in the New York Times Book Review) that he has to be told three or four times by Solnit’s female companion that Solnit is the author of the “very important book” before he gets the message. Even after registering his error, her host resumes his lecture, as though he cannot help himself. Solnit recalls that she and her companion were “politely out of earshot before [they] started laughing.”

I can only wonder at her self-control, though I’m also aware that each time I’ve had a similar experience over the last 20 years, it has seemed progressively less funny to me. Most if not all of the women I know could tell some version of this story. Instead of assuming that we might know something—possibly even more than the man we’re talking to—about the subject at hand, we are presumed ignorant and in need of instruction by virtue of gender.

We can be complicit in this exchange to a degree, of course. Women are conditioned to be deferential when dealing with men accustomed to deference. Unshakeable self-confidence in the face of male indifference or opposition has not traditionally been a characteristic that women have been encouraged to develop. Solnit observes that despite her well-established writing career, she had “a moment … when [she] was willing to let Mr. Important and his overweening confidence bowl over [her] more shaky certainty.” She argues that “a certain amount of self-doubt is a good tool for correcting, understanding, listening, and progressing,” a case that I can’t quite imagine Norman Mailer making.

But she also asserts that what happened to her that evening—and what continues to happen to me and to countless other women every day—is not simply an instance of injured female intellectual pride. The tendency among men to assume that they know what they are talking about and we don’t leads not just to silence but to violence. In “Men Explain …,” Solnit makes the point that “credibility is a basic survival tool.” Men who do not believe that women can speak with authority about their own work will also fail to recognize that women can and do speak with authority about their own lives, including their experience of discrimination, harassment, domestic abuse, or rape. These abuses of power, as she describes them, will therefore continue unchecked unless we challenge them and the mindset that leads to them.

The other essays in Solnit’s collection explore related themes with equal passion and force. “The Longest War” draws together narratives about rape and other forms of assault in order to observe that on the rare occasions when, as a culture, we talk openly about such things, we tend to discuss them in any terms but those of gender. Solnit notes that rape is said to happen because the economy is bad or because of class resentment between rich and poor, caused by “mental problems and intoxicants—and for jocks, head injuries,” even by lead exposure—but not, apparently, by the gender of the perpetrator.

Solnit argues that while both genders are capable of violent crime, the perpetrators of violence are overwhelmingly male and its victims overwhelmingly female, and that a world in which that paradigm is reversed is inconceivable:

… top-ranking female officers in the US military, unlike their male counterparts, are not accused of any sexual assaults; and young female athletes, unlike those male football players in Steubenville, aren’t likely to urinate on unconscious boys, let alone violate them and boast about it in YouTube videos and Twitter feeds …

No female bus riders in India have ganged up to sexually assault a man so badly he dies of his injuries, nor are marauding packs of women terrorizing men in Cairo’s Tahrir Square, and there’s just no maternal equivalent to the 11 percent of rapes that are by fathers or stepfathers.

This “pandemic of violence always gets explained as anything but gender,” she contends—and here she leaves me uncertain about the universality of her assertion. She’s right that discussions of violence against women, especially in the mainstream media, tend to avoid examining the role of gender. Surely, however, a thinking person can find other voices willing to acknowledge the prevalence of violence against women committed by men.

In “Pandora’s Box and the Volunteer Police Force,” Solnit notes that women are systematically punished for having the temerity to express strong opinions or otherwise step out of their subordinate position. Women daring to engage in online debates face a tide of “mostly anonymous rape and death threats.” Any woman writer (or activist, or academic) with an online presence can confirm the accuracy of this assertion.

Solnit’s essays make points both timeless and timely. In particular, “Men Explain Things to Me” has taken on a striking cultural life of its own in the years since its publication, as Solnit acknowledges in a new postscript to the essay. The verb “mansplain,” defined as “to explain something to someone, typically a woman, in a manner regarded as condescending or patronizing,” entered the popular lexicon after the publication of “Men Explain …” to such an extent that it was recently added to the online Oxford Dictionary.1 Solnit herself didn’t coin the term, as some readers assume; she writes in her postscript that the term “seems to me to go a little heavy on the idea that men are inherently flawed this way, rather than that some men explain things they shouldn’t and don’t hear things they should.” In other words, pointing out the behavior patterns of some men does not implicate all of them, and to suggest that it does is to badly miss the point.

Though she directs our attention to some grim realities, Solnit’s message is hopeful. She praises changing attitudes towards gay marriage (“In Praise of the Threat”) as the sign of an unstoppable expansion of equality brought about at least in part by the feminist movement. In “Pandora’s Box …,” she observes that, despite a conservative backlash, “queer people are not going back into the closet and women aren’t going to surrender.” In the same essay she points out the inherent absurdity of arguments that suggest feminism should already have achieved all of its goals, or that the movement is dead or has failed:

That so much change has been made in four or five decades is amazing; that everything is not permanently, definitively, irrevocably changed is not a sign of failure. A woman goes walking down a thousand-mile road. Twenty minutes after she steps forth, they proclaim that she still has nine hundred ninety-nine miles to go and will never get anywhere.

Most persuasively, Solnit reminds us that the realities of gender relations need to be discussed in the open in order for meaningful change to occur. Men are not the enemy, as arguments that seek to oversimplify and undermine feminism try to suggest. Prejudice, oppression, and silence are the enemy we face, and the confidence to speak up—or to laugh, if we can—is our not-so-secret weapon.

Men Explain Things to Me