Urban Park Poetics: Summer in Marcus Garvey Park
For city dwellers, summer is park season. Warm weather draws people out of their homes, onto the streets, and, if they’re lucky, into a nearby park to enjoy recreation of all kinds (eating, napping ... 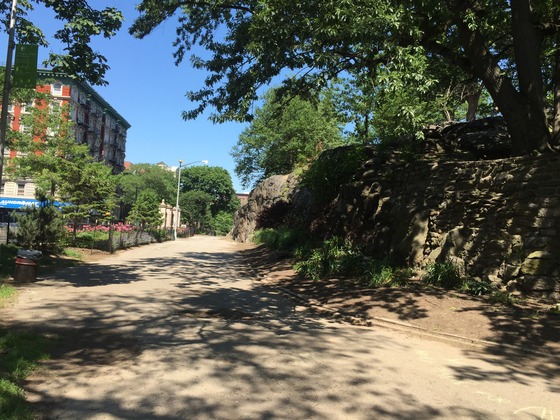 For city dwellers, summer is park season. Warm weather draws people out of their homes, onto the streets, and, if they’re lucky, into a nearby park to enjoy recreation of all kinds (eating, napping, fishing, swimming, texting, Pokémon catching, furtive sex, sunbathing, people watching). We imagine public parks as democratic spaces par excellence, offering “relief from urban intensity for residents” across “social, economic and racial divides.”1 However, chronicling the management of city parks as I do reveals that they can also become sites of urban intensification, where the patterns and tensions of the city emerge more clearly than they do in the streets.

In the summertime, Harlem radiates heat. The neighborhood’s preponderance of brick, concrete, and asphalt—and relative absence of greenery, shade, and water—traps heat to create a shimmering, sweltering bubble. Marcus Garvey Park, 20 acres subsuming 5th Avenue between 120th and 124th Streets, also bears those unrelenting summer temperatures. It’s a place that trades brick for stone, asphalt for ancient volcanic rock, open fire hydrants for sprinklers and a swimming pool. To local park enthusiasts (“parkies”), the huge outcropping of Manhattan schist—the twinkling, exceptionally hard metamorphic rock that lies just under the surface of much of the city—is the park’s defining feature. But this exposed rock is not like the blinding concrete of the city’s streets. Its hardness has shaded curves, and trees frame it. It glitters in its apparent uselessness, a tribute to the persistence of the natural landscape in the city. It is also indomitable and unmoved, indifferent to the pace of Harlem’s gentrification and the park’s attendant beautification. 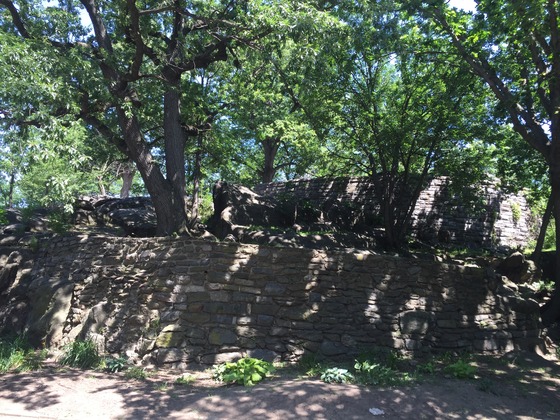 The shapes and shadows of the Acropolis. Photograph by the author

The schist’s unwavering presence resonates as a reminder of the park’s galvanizing namesake, a Jamaican immigrant to Harlem who became a Black Nationalist leader. During the 11 years that Marcus Garvey spent in the US—he was eventually deported after spending two years in prison for mail fraud—he championed black economic independence through activities that included publishing a black newspaper and establishing black-owned businesses. 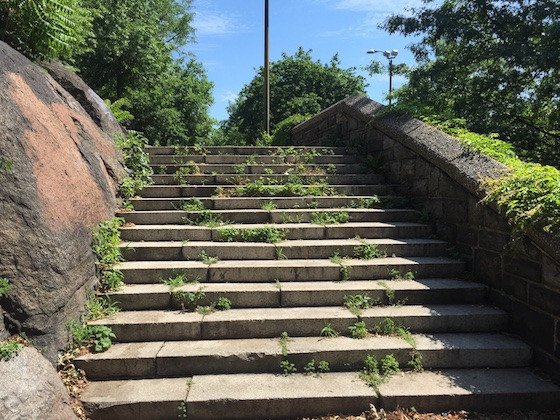 The stairs to the top of the Acropolis show signs of infrequent use. Photograph by the author

Manhattan schist is the bedrock that holds up the island. It also appears above ground in Marcus Garvey Park’s neighbor to the south, Central Park. In the former, it supports a stone structure known as the Acropolis. Built on and around the schist, the Acropolis appears a jumble of lines, shadows, and blobby shapes, its periphery providing the most reliable pockets of shaded, sweet relief in the park. Yet it is mostly an unused space during the day; the dog runs and recreational facilities see much more traffic. 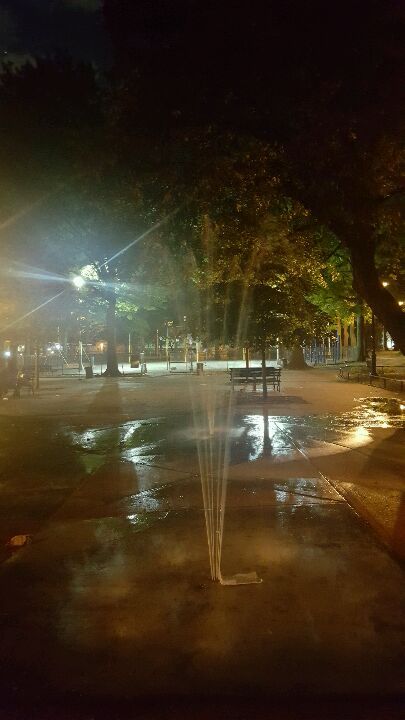 The childrens fountains spouting by night. Photograph by the author

At night, temperatures remain high, and the park is still alive. Rustlings around the Acropolis are more frequent, or perhaps just easier to hear. There is no lamplight there. At midnight, the children’s fountains continue to spout, reminders of the park’s daytime visitors. Without people beneath them attempting to cool themselves, those beloved, peculiarly urban streams, shooting from unadorned concrete, resemble sprung leaks.

Featured image: The western edge of the park, approaching midday. Photograph by the author