“Westworld” and the Dawn of Baroque TV
Part of the thrill of our New Golden Age of Television has been discovering incredible shows in places one wouldn’t have previously thought to look: streaming services, formerly niche channels ... 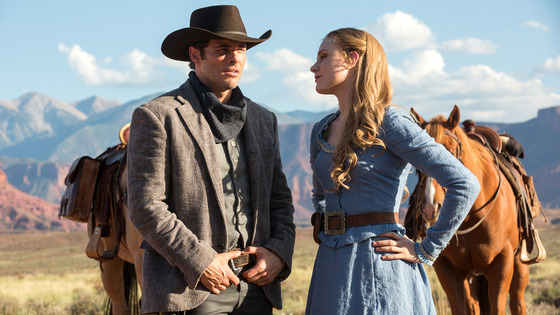 Part of the thrill of our New Golden Age of Television has been discovering incredible shows in places one wouldn’t have previously thought to look: streaming services, formerly niche channels, YouTube. With so many options, it’s a bit exhausting when a show arrives demanding to be recognized as the next big thing. Westworld—the 1973 sci-fi Western reboot that premiered on October 2 on HBO—clearly aims for nothing less. So far seems it seems to be succeeding in, at least, capturing viewers’ attention. But watching the first few episodes, with its elaborate and self-reflexive setup, I couldn’t help wondering: is Westworld a sign that Prestige TV has entered its Baroque phase?

HBO has positioned Westworld as a potential replacement for Game of Thrones, the network’s current hit show which will end its run in 2018 after eight seasons. While Westworld is impeccably pedigreed, its creators also have a troubling record of serving up entertainment that shrinks a bit with each re-watching: J.J. Abrams (Lost) shares a producing credit on the series, which was created by Lisa Joy (Burn Notice) and Jonathan Nolan (The Dark Knight trilogy, Interstellar). HBO reshot and rewrote the first few episodes extensively, letting slip in the process that they are aiming at four, maybe five seasons. The creators of Westworld, then, are hoping to feed our insatiable desire for more sexed-up, twisty, episodic genre fare. But the series simultaneously presents itself as a serious-minded investigation into … our insatiable desire for more sexed-up, twisty, episodic genre fare. 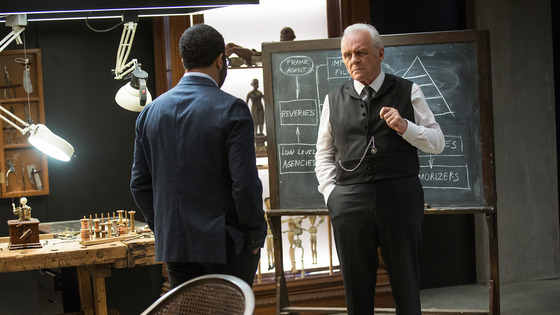 Dr. Ford (Anthony Hopkins) is the man behind Westworld‘s proverbial curtain, the showman and inventor at the theme park’s helm.

The story, taken from Michael Crichton’s 1973 directorial debut of the same name, concerns a futuristic Wild West theme park in which lifelike robots (called “hosts”) entertain human guests. These paying customers are lured to the park by the promise that there they can shoot, maim, and have sex with whatever they want—with the counter-promise that the robots can’t return the favor.

In the ’70s version, the robots waste little time before they turn on their masters (Westworld was basically Crichton’s warm-up for Jurassic Park). In HBO’s version things proceed more slowly. The tone is portentous, almost ponderous. Where the film depicted the theme park’s control rooms with a flatness that recalls the nuclear power plant in The China Syndrome (all white lab coats and machines going beep), the new Westworld looks ravishing both when it glories in the park’s attractions and when it looks behind the scenes. It spends as much time on the hosts’ slow realization that something isn’t quite right with their world as it does on the park’s creators’ creeping recognition that their fiction is bleeding back into reality.

While some hosts (played by Thandie Newton, Evan Rachel Wood, and James Marsden, among others) begin to question the nature of their reality, their creators (played by Anthony Hopkins, Jeffrey Wright, and Sidse Babbet Knudsen) have to figure out whether the park is perhaps more real than they suspected. The show takes its time laying out these philosophical and dramatic stakes. Meanwhile, it circles back again and again to the daily monotony of creating exciting entertainment: the robots’ nightly tune-ups, the staff meetings, the wrangling over creative control. In other words, Westworld is a show about putting on a show.

“Westworld” is a series about us, the binge-watchers, the recappers, the tv critics—people who submit willingly to a world made of tricks and manipulation.

It’s hard to tell if this self-reflexivity is a sign of maturation or decadence. Crichton’s Westworld was typical ’70s genre fare: a straightforward, almost simplistic, fable about a society bent on amusing itself to death. The sort of material Crichton trimmed for efficiency and a 90-minute runtime, however, constitutes the bread and butter of our current age of epic television. The kinds of curlicues he had no patience for—the world-building, the complex characters, the surprising turns—are what makes shows like Game of Thrones successful.

Indeed, the new Westworld makes an explicit topic of its byzantine plotting. The park’s creative team, which tries to come up with engrossing and surprising storylines day after day, frequently finds itself confronted with audience fatigue and fan resentment. It resembles nothing so much as the writer’s room of an HBO series. Members of the team speak openly in the jargon of storylines and world-building, invent villains and recast characters, and debate tone and audience in ways that must closely resemble the creation of the show Westworld itself.

Crichton’s film quickly established its world, and just as quickly watched it unravel. The first 15 minutes of HBO’s update makes it quite clear that things won’t be so simple. In this version, our Gunslinger (played by Ed Harris) is a guest who has been spending his vacations in the park for a long time. Even though he is presented as a villain, he immediately reminds us that he is playing a role. And outside of the park, we learn later on, he appears to be an altogether different sort of person.

Westworld differs from its source material in theme as well as pacing. The HBO series no longer bothers to warn us about technology and its fatal combination with human hubris. It asks, instead, how one ought to live with technology that exists all around, and what sort of morality is called for in our virtual world. It is beyond doubt that this Westworld, too, is headed for some sort of catastrophe. But the show regards it all fatalistically, with none of the film’s alarm. There is something meditative about its slow progress towards the moment when the machines realize what is happening to them, which is also when the humans must confront what they are doing to the machines. 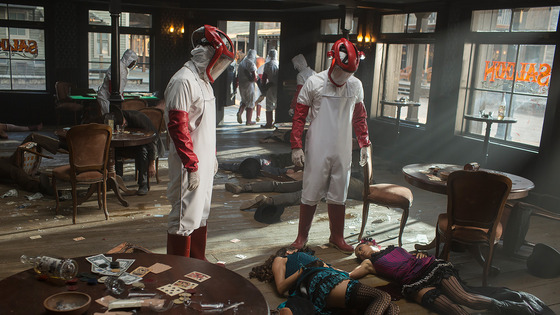 Clean-up crew: In a theme park with no rules, someone has to tidy up after the violence.

Westworld knows it can’t replace Game of Thrones, and it has the moxie to make this identity crisis another implicit theme. The Gunslinger functions as a kind of allegory of this very problem: he’s akin to a superfan who has seen all the episodes and now wants to understand the producers’ secret endgame. Dr. Robert Ford (Anthony Hopkins) stands in for the showrunner, the figure who so obsessively tinkers with his creation that he loses control over it.

Above all, Westworld is a series about us: the binge-watchers, the water-cooler-talkers, the recappers, the TV critics. The series asks what makes an audience submit willingly to a world that consists of tricks and manipulation. The park’s visitors, who expect structure and identifiable plots but just as quickly tire of them, are clear analogues to us, the HBO viewers. Westworld looks straight through the TV set and scrutinizes us: it wonders how our addiction to newness squares with our insistence on familiar characters and plots; it wonders why we claim to want surprise, but often freak out at any truly unexpected twist; it marvels at our ability to gawk at sex and violence, so long as it’s at a safe distance.

The show is not exactly subtle about its meta-dimension. The square-jawed robot Teddy (James Marsden) spends the first two episodes blundering through Westworld with only hints of a backstory. In episode three, we learn that the park’s creative team never got around to inventing a backstory for him, so they decide to give him one with his next upgrade—OS Guilt Complex 10.3. In the same episode, we suddenly learn that one of the human players lost his child and is still haunted by it—another upgrade, but this time on the part of the HBO writers. The series seems to ask: how is one operation so different from the other?

These questions aren’t without a certain grandeur, and the series is most exciting when it ditches the source material to hang out in this house of mirrors. Dr. Ford (Hopkins) as a modern-day Pygmalion, for instance: when we meet him for the first time he’s drinking whiskey with one of his creations. Or Teddy, who walks and talks and is framed like a protagonist, but seems to have no clue what’s really going on in his world. Or corporate bigwig Theresa Cullen (Knudsen), who has to confront the same question as Teddy: does she understand Westworld better than the others, or does she misunderstand it on some fundamental level?

I found it hard to get emotionally invested in these characters. The androids might be literally bloodless, but the humans, too, feel dialed-down and sedated. The show, however, seems to recognize as much. In the fourth episode, chief engineer Bernard Lowe (Jeffrey Wright) confronts “host” Dolores with a question straight out of a late-night bull session in a freshman dorm: he asks her if she’d like to erase her memories of her parents’ murder. She answers that she thinks the pain makes her who she is. It’s worthy of an eye roll, at first, but then Westworld once again proves more cunning than it initially appeared. Wright asks her “did we write that for you?” To which she responds: “In part. I adapted it from a script about love.” There is no room for naiveté in Westworld.

The scene is emblematic of the first few episodes of the series. We’re watching a gigantic machine operate nearly perfectly: every time we think we’re ahead, it turns out everything has been calculated in advance—by the showrunners, by the park’s creators, by the hosts who are, while not fully self-aware, still incredibly smart machines. But very slowly a ghost appears in the machine. The show begins to repeat itself; bits of dialogue and even entire scenes are repeated with subtle variations, a point which Ramin Djiwadi’s knockoff Philip Glass score works overtime to make sure we notice. The first few tweaks are groaningly predictable, but then the disturbances become harder to parse. The eternal variation of the self-same script somehow brings something genuinely new into its world.

What it all adds up to is hard to tell as of yet. Perhaps an epic will slowly emerge out of the repetitions. Or perhaps we’ll find ourselves watching another Lost: a well-calibrated clockwork whose gestures at a grand design turn out to be nothing more than gestures. Given the kind of storytelling Westworld is up against these days, I’m not sure how much patience audiences will have for another ambling series that insists it’s more than the sum of its parts. Westworld knows we’ve become awfully demanding viewers, and there are plenty of other TV worlds out there to divert us. But if the show proves it can deliver on its elaborate setup, it can count me as one of its guests each week, among the other fickle, gawking visitors demanding to be entertained.

Featured image: Two of the robots, or 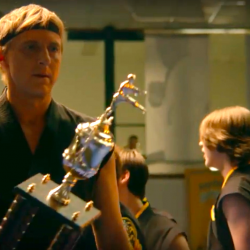