Ann Arbor, Michigan: Bricks and Bread
This is the latest installment of Public Streets, a biweekly urban observations series curated by Ellis Avery. In the 1970s, Ann Arbor, Michigan smelled like sorghum, carob, and tamari, breathed out ...

In the 1970s, Ann Arbor, Michigan smelled like sorghum, carob, and tamari, breathed out onto the streets from the Sun Bakery and the People’s Food Co-op. Downtown Ann Arbor, such as it was, ran from the University of Michigan main campus west to the slope down to the railroad tracks and the Old West Side. Fingerle Lumber lay roughly at the south limit and Kerrytown the north.

We bought our back-to-school shoes at Jacobsen’s department store and our good clothes at Goodyear’s or Kline’s on Main Street. Sometimes you could get a sundae for your birthday at Goodyear’s, though never a trip to the cubist brick McDonald’s, wedged in next to Nickels Arcade. We would fish all of the pennies out of the fountains on campus and take the soaking handfuls of change to Drake’s Sandwich Shop, where they sold chocolate cordials, marzipan, and ice-blue mints by the ounce out of gallon glass jars.

On Saturdays a farmer’s market set up in Kerrytown with tables of apples in the fall, and sometimes free puppies or kittens in a cardboard box. At the seafood counter in the market building, we could gawk at the whole snappers and trout, displayed on ice. On Fifth Avenue, next to the Library parking lot, a tiny house-turned-store sold goldfish with flowing white fins that glowed under the fluorescent lights.

In the ’80s a new Federal building went up across Fifth Avenue from the goldfish store. Martial arts supplies replaced the goldfish, with throwing stars and chest pads piled in the front window. The proprietor, crowded in between stacks of uniforms, would embroider the belts and gis on the premises. The 19th-century storefront with the Singer sewing machine shop on William Street was torn down to make way for library expansion and a new credit union. Gradually, New Age stores selling rayon dresses, amethyst pendants, and incense showed up near Kerrytown and campus, their patchouli and sandalwood displacing the scent of wheat bread.

Community, or Commie —the alternative high school— was an old brick building with no cafeteria, so a lot of the kids ate at Kosmo Deli in Kerrytown, or bought five cent bread heels and some butter from Zingerman’s Deli, which stood next to the school parking lot.

In the ’90s, Ann Arbor became less hippy and more corporate. Drake’s Sandwich shop, with its mid-Century Martian room and watery limeades, closed, to be replaced by a bagel chain. Jacobsen’s closed and became the headquarters for Border’s Bookstores. The little storefront on Fifth Avenue that had once housed goldfish and gis became a family-owned falafel restaurant called Jerusalem Garden. In place of an industrial embroidering machine, the family patriarch presided over the entrance, wearing his traditional knit skullcap.

The crazy modern McDonald’s behind Tower Plaza Apartments was torn down, to be replaced by the first wave of condos and town houses peppering downtown. But gothic Nickels Arcade with its double row of fascinating shops remained.

The 21st century arrived. Border’s downsized. Zingerman’s Deli gradually took over several adjacent lots. My children visited the fountains on campus and admired the tiny glass animals in the windows of Caravan in Nickels Arcade. In 2012, my mother bought a house next to Zingerman’s. Now she lives with my sister’s family above my sister’s flower shop on the first floor, tucked in a triangular lot between the deli, Community High School, and Kerrytown Market. 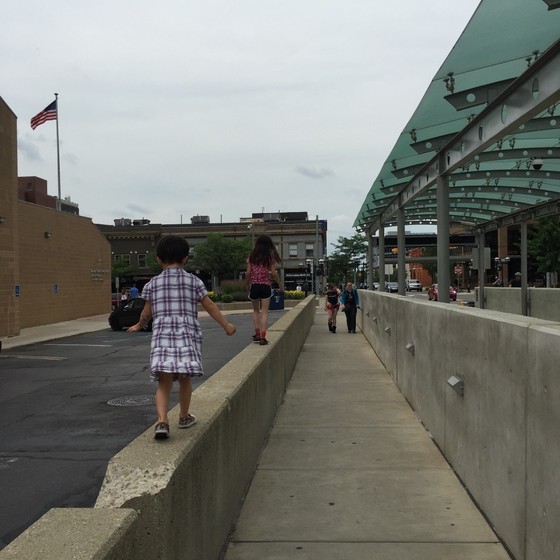 Today downtown smells like rainfall, coffee, and concrete. My children clamber onto the parking lot wall of the Federal building just as I did thirty-five years ago, but parts of the concrete have broken off since then. The town has outgrown its ugly but modestly boring City Hall and replaced it with a giant (and still ugly) metal-sided cliff on Fifth Avenue. The campus is spilling from its seams on all sides. The medical school and hospitals have climbed out of their valley on the north side of campus and are flowing downhill on all fronts.

The Title Company’s Art Deco facade is still tucked into a small space on Fourth Avenue. The St. Vincent DePaul building, Ann Arbor’s oldest, with its 19th-century crenelated roof, still guards the north end of the Broadway Bridge. The bricks paving the streets around Zingerman’s and Kerrytown haven’t been replaced in the past forty years. There is still a fish market in Kerrytown, although the fish cuts are arrayed in neater, cleaner rows and have a swanky lunch counter serving chowder and the catch of the day. Jerusalem Garden, crammed in a tiny house for twenty years, had just moved around the corner to the space that had once been Ann Arbor’s signature vegetarian restaurant, Seva. Though their patriarch passed some years ago, the same family still runs it, and the shawarma still comes with zippy garlic sauce. And a pickle.