Gordon Syron and the Art of the Invasion
In what ways might art resist a colonial state? Can a painting function as a land rights claim? 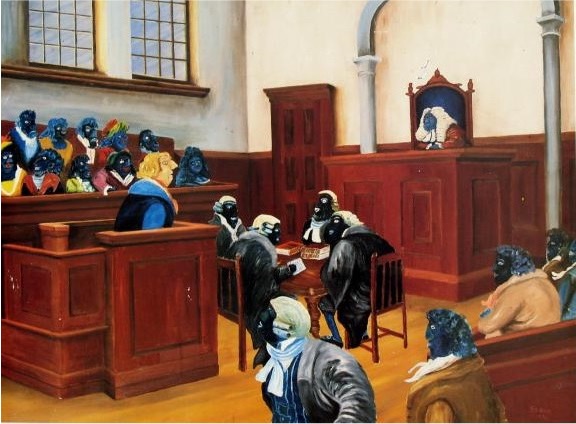 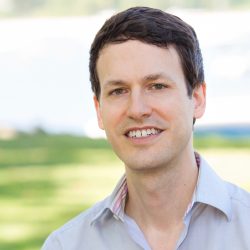 Before he was a painter, Gordon Syron, an Indigenous Australian, grew up with his family on a dairy farm in northern New South Wales. Then, in 1971, that huge estate of rolling pasture was bestowed to a white cousin, who refused the Syron family’s claims to the land. Syron’s Irish grandfather, Patrick Daniel Syron, had settled on the property originally, but laws restricting Indigenous land rights left Syron and his fifteen siblings without clear legal recourse.1

“It seemed just so hopeless at the time,” Syron recounted in a 1998 interview, “and I didn’t know the things that I know [now], and of course I went and took up a gun.”

Syron expresses regret for the actions that led to his imprisonment; still, he insists that the killing of his cousin was a land rights issue. He sees his act as a response to political and physical violence against Indigenous Australians, both past and present, two-thirds of whom now die before the age of 65, versus only 19 percent in the non-Indigenous community, according to a 2015 report from the Australian Institute of Health and Welfare.2

“British law is all right for the British,” Syron argues, “but Aboriginal law, customs, language, dance, Mimi spirits have been around a lot longer than ‘British law.’”

Syron learned to paint while in prison, inspired by the skills of several fellow inmates serving time for forgery. His 1978 painting Judgment by his Peers remains among his most iconic, a searing indictment of a legal system that refused his request for at least one Indigenous juror at his 1972 murder trial. (He often recounts courtroom debates over whether he was “Black enough to be Black,” noting mordantly that he’s Indigenous enough to have faced a lifetime of discrimination.) Judgment by his Peers features Syron’s cutting irony, in that it reverses his own courtroom scene: a white man sits on trial before an all-Black jury and judge, with Black barristers consulting in between.

Judgment by his Peers was featured in Sydney’s 1984 Koori Art exhibition, the first major display of what has come to be called the Urban Aboriginal arts movement. Syron had been out of prison for two years, released after serving a decade of his life sentence. Australian curator and writer Vivien Johnson was one of the Koori Art organizers, and she recalls “being struck at the time by Gordon’s artist statement for the catalogue, ‘Birapi tribe on the North Coast–Minimbah area.’” Rather than “stating [his] credentials as a contemporary artist,” Syron laid claim to his Indigenous identity. That self-identification was seen as “contrariness” at the time, says Johnson, but has since “become mandatory in the world of contemporary Aboriginal art.”3

Such assertions of self-identity are deeply engrained in Syron’s work, which draws piercingly from his own life experiences of dispossession and discrimination. The claim of Indigenous identity remains for him the key to understanding Judgment by his Peers.

Syron has now been painting for almost five decades and has helped inspire a movement that focuses on the art of Indigenous Australians working outside traditional representational practices. His paintings ask crucial questions: In what ways might art resist a colonial state? Can a painting function as a land rights claim? At a time when the Australian government is negotiating the return of some lands to the original Indigenous owners, the paramount questions have to do with proof: What constitutes evidence of prior ownership?

Gordon Syron exhibited his first major painting in 1978. He was 36 and serving a life sentence at the Long Bay Correctional Facility outside Sydney, Australia. The location for the display was a daycare center for Indigenous children in Redfern, Sydney, called Murawina, or Black woman in the Arrernte language of central Australia. In the 1970s, the inner-city neighborhood of Redfern had become the center for Indigenous rights activism in Australia, the site of both the Aboriginal Legal Service (ALS), founded there in 1970, and the Aboriginal Medical Service (AMS), which began a year later. Koori Radio, Sydney’s primary Indigenous broadcasting station, calls Redfern “Australia’s Black Capital.” Though he was born and raised on the dairy farm, the now 80-year-old Syron has focused much of his political energy on the Redfern community.

Not too far from Redfern, in the city’s central business district, is the Museum of Sydney. This contemporary structure, built on the site of the colony’s original Government House, was where I first encountered Syron’s work in December 2007. A newcomer to the city, I stood transfixed by the deep blues of Invasion I, a vision of the British First Fleet’s 1788 arrival in Sydney Harbor. Those who follow Syron’s career often refer to “Syron blue,” a feature of his best-known works. “It’s a blue planet we live on, with blue lighting,” he mused to me during a 2019 interview. “Blue gives us perspective, doesn’t it?” 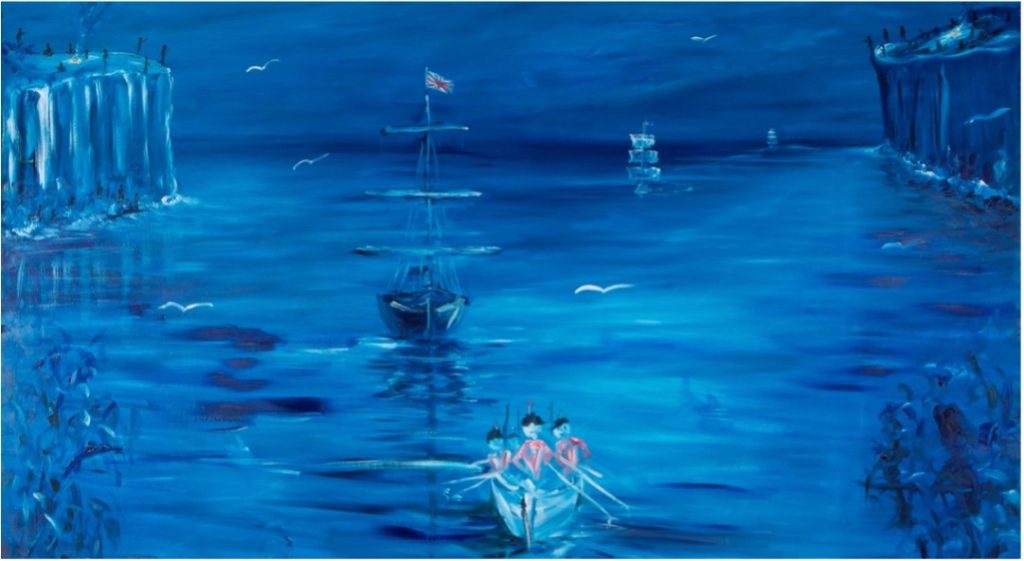 In his Invasion canvas, the reds of British uniforms rupture the otherwise peaceful blue tableau, Indigenous silhouettes framing the scene as spectators. The eerily skeletal faces of British soldiers foreshadow deaths to come, an interruption of life as it had been on the continent for tens of thousands of years.

Syron himself sees the painting, part of a large series more than two decades in the making, as an assertion of Indigenous land rights. “I wanted to make the Aboriginal people in control of the land,” he wrote in a 2012 description of the project. “Terra Nullius was used as a valid reason to claim Australia and I dispute that claim, using this painting as proof.”4

Syron here refers to the British seizure of Australian land through the justification of terra nullius, or no one’s land, a legal policy that refused to acknowledge precolonial Indigenous land interests. The High Court of Australia overturned terra nullius in 1992 with its decision in Mabo v. Queensland. Yet in the three decades since, Indigenous Australians have nonetheless struggled to reclaim land seized across more than two centuries of colonization.

Under the Native Title Act of 1993, passed by the Australian government in response to the Mabo decision, Indigenous Australians looking to claim property ownership must prove continuous attachment to the land from the time of British settlement. As a result, historian Lisa Ford notes, these new rights were “fragile rights indeed,” given the high bar for securing them: “Indigenous people could lose their connection with their land merely by ceasing to be sufficiently connected to it.”5 Two centuries of governmental policies that often forcibly removed Indigenous peoples from their land have left few options for legal remedies in most cases.

Syron’s paintings respond to the overwhelming frustration of this dynamic, reaching back to the moment of contact itself to display vividly the Indigenous connection to land in the Sydney region. The Invasion paintings work within a much larger effort to establish Indigenous claims, including Bruce Pascoe’s provocative book Dark Emu (2014), which uses archival documents and archeological evidence to show that Indigenous Australians practiced agriculture prior to European settlement.

The idea of using contemporary art as proof of land rights resonates across the Indigenous Australian art world, as the visual anthropologist Jennifer Loureide Biddle has argued. “Aboriginal art in Australia inaugurates prior rights and preexistent claims of Indigenous first nations peoples and territories,” she writes in Remote Avant-Garde: Aboriginal Art under Occupation (2016).6 Insofar as Indigenous Australians “have in effect become trespassers in [their] own land until [they] prove [their] native title,” as Aileen Moreton-Robinson puts it, Syron’s canvases testify to their fundamental belonging.7

In what ways might art resist a colonial state? Can a painting function as a land rights claim?

The tranquil portentousness of Invasion I explodes into violence with Syron’s 1997 Terror Nullius I, now housed at the Australian National Maritime Museum in Sydney. The canvas directly confronts one of white Australia’s core narratives, reframing the British celebratory arrival in Sydney Harbor as rapacious invasion. Shifting the perspective to deep within the Australian bush, the painting looks out on British redcoats raising the Union Jack on a shoreline as others bearing muskets approach the observers’ point of view. We know what will follow.

Even more than the Invasion paintings, this canvas fills the landscape with Indigenous life and culture. Mimi spirits dominate the central foreground with their elongated black limbs and spectral faces. These fairylike figures, or guardian spirits, appear in Indigenous rock art in Kakadu National Park in the Northern Territory of Australia dating back up to 20,000 years.

In 2004, Syron mounted a solo exhibition in Bangalow, New South Wales, called Black Fairies for Aboriginal Kids: “I was sick of seeing white fairies everywhere I looked,” he said. “I wanted to make Aboriginal children happy.” In Terror Nullius, Syron’s Mimi spirits spread protectively across the canvas as Indigenous silhouettes navigate the landscape, some with spears, others sitting cross-legged and playing the digeridoo. A cacophony of colors—birds, flowers—signals the vibrant world British soldiers are poised to assault, bringing with them the terror and incongruity of terra nullius.

Syron’s paintings thus document the pain that results when humans and human institutions like the law, prisons, and the various apparatuses of colonialism take over. But more than that, they lay claim to Indigenous rights never ceded to colonizing forces. “The redcoats,” Gordon tells me, pointing to a mural on his living room wall, “they cut the bloody trees down, sent the kangaroos running.”

Terror Nullius reflects the colonial violence that feels anticipated in Invasion, the transformation of a peaceful natural scene into a nightmare. “In 1788 the English came through the Heads into Port Jackson and took over,” Syron wrote in a 2012 journal entry. “They raised the English flag, shot and murdered lots of natives, poisoned the water holes. … They did every terrible thing imaginable to the owners of this great land, and still to this very day there are lots of things that need to be corrected.” Anger and a sharp desire for justice thus combine with entrancement at the world’s natural beauty, to produce art both visually stunning and politically dynamic. 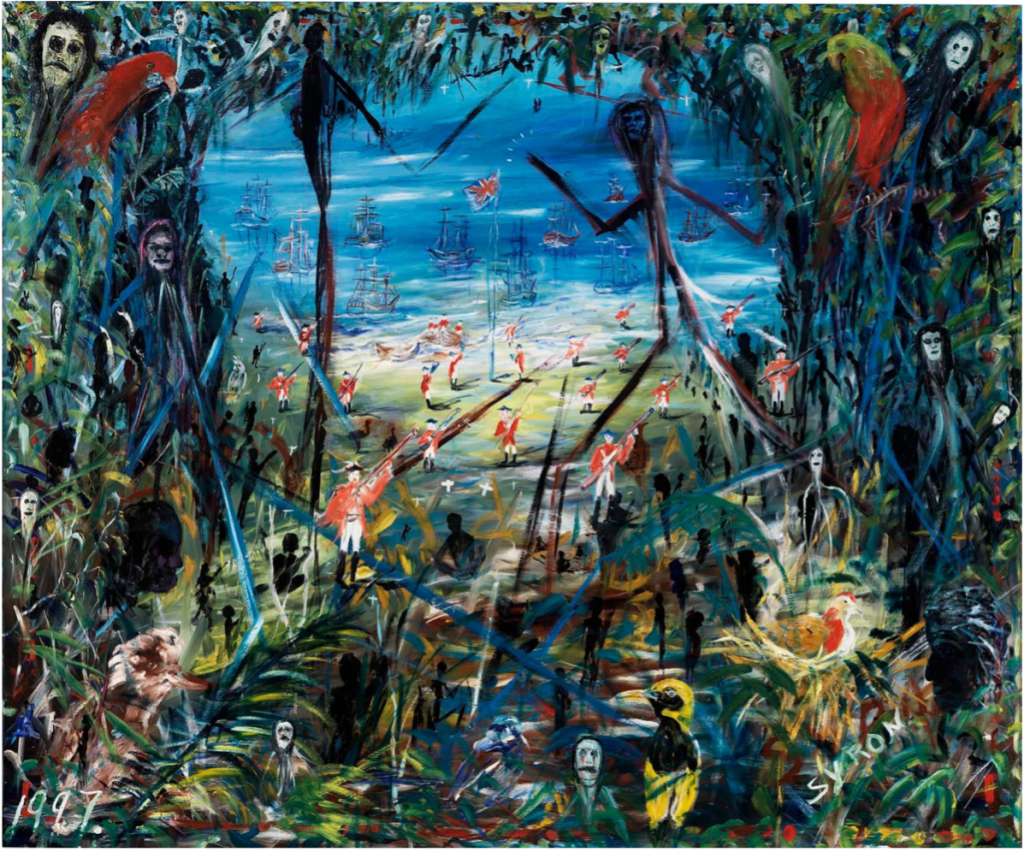 The unfinished political dreams of 1970s Redfern and 1984’s Koori Art, along with the challenges of post-Mabo Australia, live on through Syron’s canvases. Indeed, Syron’s political work—specifically, his insistence that art might constitute evidence of Indigenous land rights—may seem unique, but ultimately it makes explicit a feature quietly embedded in Indigenous Australian art more broadly. Artists such as Emily Kame Kngwarreye (1910-1996), whose paintings exhibit more traditional modes of Indigenous representation, foreground landscapes long inhabited by Indigenous Australians and show both spiritual and cultural connections to that land. Syron’s project illuminates this rich body of evidence, promoting the larger political goals of his community, such as parliamentary representation at the federal level and the return of sacred Indigenous lands.

The prevailing energy of Syron’s work is resistance, fueled by irony and shifted perspectives: a white man on trial before an all-Black court, or British soldiers revealed as violent invaders rather than heroic pioneers. “People look at Gordon’s work,” says the American-born photographer Elaine Pelot Syron, Gordon’s wife, “and they do a double take.”

And it is this feature of Syron’s art—that moment of reconsideration, of looking again—that may well provoke greater support for Indigenous Australians’ political claims today. “It’s quite emotional, really, to see [British colonialism] from a different perspective,” says Aiesha Saunders, who worked as assistant curator of Aboriginal Interpretation Projects at the Museum of Sydney. She notes that the narrative of invasion had only recently been imagined from an Indigenous point of view, rehumanizing figures objectified and marginalized by most of Australian history. Indeed, Saunders tells me that “it’s thanks to people like Gordon”—vocal Indigenous elders—“that we can walk without shame.”