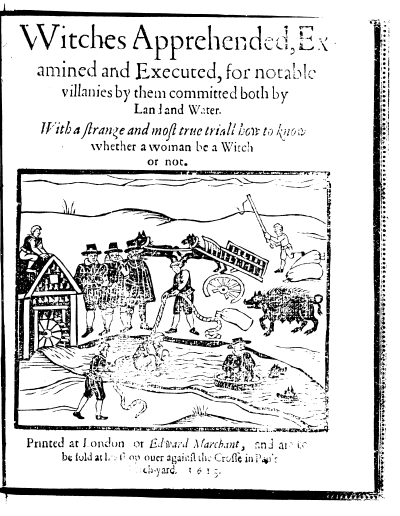 “The North is the dark place.” The first words of The Daylight Gate will not be surprising to readers familiar with Jeanette Winterson’s gothic upbringing in the north of England (200 Water Street, Accrington, Lancashire, to be precise). In both her brilliant debut novel, Oranges Are Not the Only Fruit (1985), and her recent memoir, Why Be Happy When You Could Be Normal? (2011), the North is dark indeed. (In Why Be Happy, Winterson’s evangelical mother tells her adopted daughter that the “Devil led us to the wrong crib.”) Yet the North is also a magical place in Winterson’s books.

The Daylight Gate opens with a description of Lancashire’s Pendle Hill, in whose shadow much of the story takes place. For Winterson, the hill is a “hunter—alive in its black-and-green coat cropped like an animal pelt,” with a spine of black rock and hares standing upon it “like question marks.” As in Winterson’s other Northern books, the fates of girls and women play a large role in The Daylight Gate. “There is still a tradition, or a superstition,” the narrator tells us, “that a girl-child born in Pendle Forest should be twice baptised; once in church and once in a black pool at the foot of the hill. The hill will know her then. She will be its trophy and its sacrifice. She must make her peace with her birthright, whatever that means.”

The novel revolves around two stories of female birthright: that of the rich and suspiciously youthful Alice Nutter, inventor of an incandescent magenta dye adopted by Elizabeth I herself and owner of an estate with “lime trees trained to make an avenue to the door,” and that of Jennet Device, a feral, starving, and repeatedly raped nine-year-old girl who brings about Alice’s death. Both are, to some extent, historical figures, who appear in Winterson’s source, The Wonderfull Discoverie of Witches in the Countie of Lancashire, a pamphlet “[p]ublished and set forth by commandement of his Maiesties iustices of assize in the north parts,” and compiled “By Thomas Potts Esquier,” who appears alongside a range of other historical figures in The Daylight Gate. In interviews, Winterson refers to the techno-bibliographical phenomenon by which pamphlets like Potts’s became available to her generation of writers: the STC, or Short Title Catalogue, a database of all works published in English between 1473 and 1800, including The Wonderfull Discoverie.1

The Daylight Gate is Winterson’s most recent attempt to use the STC for literary purposes. The novel’s introduction boasts a kind of scholarly precision and many of what seem like the most fictional aspects of the novel are in fact taken directly from the historical pamphlet. “Mouldheels,” for example—a witch Winterson describes as having “flesh that fell off her as though it were cooked” and feet that stink like “dead meat”—is the alias of one of the executed women in The Wonderfull Discoverie. The pamphlet’s description of the witch “Chattox” as having “lippes euer chattering and walking: but no man knew what” is topped by nothing else in the novel.

At times the novel’s debt to the STC, and to the “historical record” more broadly, renders The Daylight Gate lopsided. Some of the historical figures are presented in perfunctory and unimaginative ways. For example, Thomas Potts, an ambitious lawyer and “proud little cockerel of a man,” simplistically conflates the two current political threats to England, demanding, “Witchery popery popery witchery. What is the difference?” and then listing his credentials as though reading from the self-promoting dedications in the historical Potts’s pamphlet. (Winterson’s Potts also manages to insult Shakespeare before a performance of The Tempest.) Her Shakespeare is likewise formulaic, a “small, balding, genial,” and owl-like man who comes to Alice Nutter in his slippers to warn her, and her Jesuit lover, away from England. Winterson follows the “Lancastrian Shakespeare” hypothesis, making her Bard a Catholic sympathizer who spent the “missing years” of his biography as a tutor in Hoghton Tower in Lancashire.2

Shakespeare’s best moment in the novel comes when he warns Alice that she “not be seen to stray too far from the real that is clear to others” lest she “stand accused of the real that is clear to [her].” Here, finally, we are in familiar Winterson territory—not just the imagination, but the particular kind of imagination that violently rejects the facts as others have laid them out. The “real that is clear” to Alice is, as it always is in Winterson’s novels, love. This love comes in different forms. There is sapphic love (Winterson accounts for the inexplicability of a gentlewoman like Alice Nutter being executed as a witch along with “riff-raff” like Jennet Device’s people by describing a love affair between Alice and the witches’ matriarch, “Old Demdike,” a name taken from the pamphlet that even Winterson couldn’t invent). And there is love beyond both the body and the grave.

In Sexing the Cherry Winterson presents a brilliant taxonomy of love’s variety:

On the one side there were those who claimed that love, if it be allowed at all, must be kept tame by marriage vows and family ties so that its fiery heat warms the hearth but does not burn down the house.
On the other there were those who believed that only passion freed the soul from its mud-hut, and that only by loosing the heart like a coursing hare and following it until sundown could a man or woman sleep quietly at night.

The Daylight Gate describes how bodies can be mud huts, particularly the bodies of the poor: the rat-eating, lice-ridden women in the dungeon of Lancaster Castle awaiting their execution; Jennet Device scrabbling in the dirt for a chicken leg; Old Demdike, the master witch, crumbling into dust. Jennet Device, who sends her abusive kin to their deaths along with Alice, achieves a minor transcendence when she eats a week’s worth of food over the dying body of her rapist trapped in the dirt cellar beneath her feet. But the novel’s vivid descriptions of freed souls and hearts coursing like hares are more resonant than its moments of grim realism.

At one point the mathematician and magician John Dee tells Alice, “Whatever you are you are not the pragmatist I feared.” While magic is part of Alice’s arsenal, love provides the transcendence she seeks. The daylight gate of the novel’s title refers to dusk, the liminal hour when those who wish to live in one world must go inside lest those who live in darkness catch them. But the daylight gate is also the gateway between this world and the next. The novel opens with a peddler rushing to get home because he does “not want to step through the light into whatever lay beyond the light.” By the end, Alice proves more than willing to make that journey.

Winterson has always been candid about the autobiographical roots of her novels. In Why Be Happy When You Could be Normal? she writes about the effects that being locked in the coalhole and left outside on the doorstep overnight—her mother’s favored punishments—had on her imagination. Being left outside forced her to make up stories to forget about the cold and the dark, and being locked out gave her a “feeling for liminal space,” a desire both to keep doors open and to step outside of linear time and enter “real time,” the place, as she puts it, “where the soul used to live.” In many ways, Jennet Device and Alice Nutter can be taken as reflections of Winterson herself: Jennet is the girl locked in the coalhole who wreaks vengeance on her witch of a mother; Alice is the Lancashire girl who makes good, the magician who steps through time to a place far beyond “the real that is clear” to everyone else.

The Daylight Gate is also a reckoning with Winterson’s roots. The industries in which the Lancashire “witches” work—dye-making and wool-carding—are part of the prehistory of the industrial revolution, which started in the North of England. In her memoir, Winterson remembers the happiest times in her childhood as those spent walking on Pendle Hill with her working-class father. Writing about these walks, she imagines the ridge of the Lancashire Pennines as “a rough watcher who loves something he can’t defend, but stays anyway, hunched over the ugliness human beings make.”

Central to Winterson’s reckoning with the past is her reckoning with her mother. Mrs Winterson saw her daughter’s lesbianism as a sin—in Why Be Happy Winterson sums up her mother’s view on the subject as “Soft bodies all the way to Hell”—and her literary success as the result of a Faustian pact. (When Alice Nutter breaks Old Demdike’s own pact with the “Dark Gentleman,” with the triumphant words “Love is as strong as death” in The Daylight Gate, one feels a tingle of vindicatory satisfaction.) Yet Winterson also writes movingly about her mother’s own relationship to the metaphysical. In Mrs Winterson’s heretical eschatology, the “End Time” was the end of the “things of this world,” not the resurrection of the flesh but the movement from matter to energy: “She said that after the atomic bomb you couldn’t believe in mass any more, it was all about energy.” Though its means are different and its characters leave “the rotting place” of their bodies according to another set of heresies, The Daylight Gate is about this same movement.