Clever Man Outs Female Author: A Drama in 3 Acts
This month, we witnessed a contemporary version of a drama that we might call “The Female Author’s Disclosure.” It features the following dramatis personae:     • The Heroine: a female ...

This month, we witnessed a contemporary version of a drama that we might call “The Female Author’s Disclosure.” It features the following dramatis personae:

• The Heroine: a female author who decides to publish under an incognito.
• The Confidantes: friends or associates who know her real identity, and are begged to maintain the secret.
• The Discloser: a “clever man,” often a jealous fellow author, who sniffs out and publicizes the secret.

As the drama unspools, the male Discloser wrests control from the female Heroine. His sleuthing and gossip undo the self-determination and self-creation she sought to achieve by adopting a pseudonym (usually a male one).

The drama concludes with a scene of unmasking, as the female author finally abandons her incognito and steps into a new and very different role: the known author of her own work.

To students of Victorian literature, this is a familiar drama—dare we say, a played out one. Let’s take a look at three of its early productions. 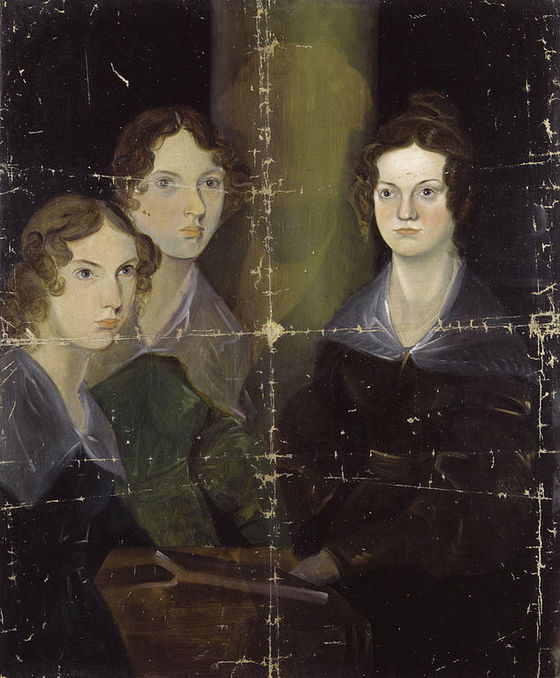 Act I.
The Heroine Chooses Her Incognito

1. Charlotte Brontë and her talented sisters offer perhaps the most famous examples from the period of pseudonymous female authors. Charlotte’s friend and fellow author Elizabeth Gaskell explained in her 1857 biography that after the publication of Jane Eyre: An Autobiography, “edited by Currer Bell,” in 1847, “the whole reading-world of England was in a ferment to discover the unknown author. Even the publishers of Jane Eyre were ignorant whether Currer Bell was a real or an assumed name, —whether it belonged to a man or a woman… Conjecture as to the authorship ran about like wild-fire.”

2. George Eliot, as we now call her, was born Marian Evans. By the time she began to write fiction, she had already established a reputation as a freethinking editor and translator who was living with George Henry Lewes, a married man. She adopted the pseudonymn “George Eliot” for her first works of fiction, writing to her publisher in 1857, “Whatever may be the success of my stories, I shall be resolute in preserving my incognito, having observed that a non de plume secures all the advantages without the disagreeables of reputation… [T]o an author not already famous, anonymity is the highest prestige.”1

3. Katharine Harris Bradley and Edith Emma Cooper, the aunt and niece duo who published their poetry and drama jointly under the pseudonym “Michael Field,” offer a lesser-known instance of the dynamic. Bradley and Cooper adopted their incognito in 1884 both to conceal their collaboration, and to avoid prejudgment as female authors: when they had seen Sarah Bernhardt performing a male role, they wrote with approval, “sex is forgotten as an accident—and the ideal lover remains.”2 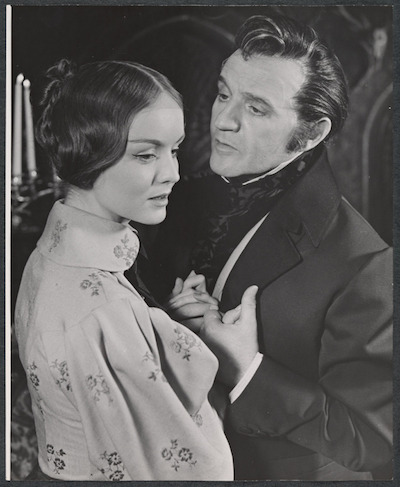 1. Brontë wrote to Elizabeth Gaskell, instructing her to rebuff any questions about Brontë’s authorship: “I have given NO ONE a right either to affirm, or to hint, in the most distant manner, that I was ‘publishing’—(humbug!)… Though twenty books were ascribed to me, I should own none… The most profound obscurity is infinitely preferable to vulgar notoriety; and that notoriety I neither seek nor will have.”3

2. Eliot let her secret slip to Herbert Spencer in an after-dinner conversation in 1857, and she implored him to keep it. When Dickens wrote her in praise of her Scenes from Clerical Life, Eliot commented that it was excruciating not to be able to thank him personally: “the iron mask of my incognito seems quite painful.” When her publisher John Blackwood came to visit her and Lewes early in 1858, she left the room and signaled to Lewes in order to tell him “that he might reveal me.” Blackwood agreed to maintain her identity as “a profound secret.”

3. When the poet Robert Browning sent “Michael Field” a fan letter and probed for personal information, Cooper—no doubt excited by the attention from one of Victorian Britain’s most famous authors—revealed their secret to him, trusting him to keep it: “My Aunt & I work together after the fashion of Beaumont & Fletcher… This happy union of two in work & aspiration is sheltered & expressed by ‘Michael Field.’ Please regard him as the author.”4 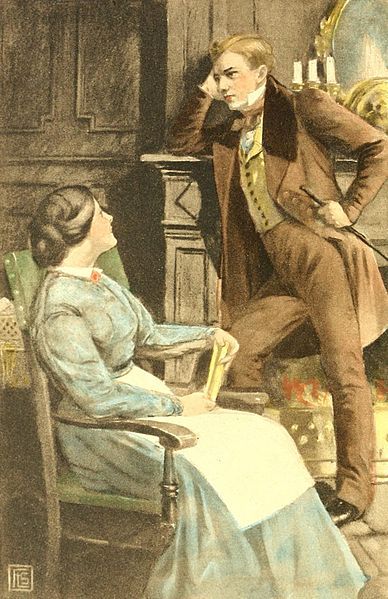 Mary Garth and Fred Vincy of George Eliot’s Middlemarch, from a 1910 edition of the novel. Photograph courtesy of The Jenson Society, NY / Wikimedia Commons

Act III.
The Discloser Uncovers the Truth; the Heroine is Revealed

1. Gaskell wrote of Brontë’s identity as Currer Bell: “the secret, so jealously preserved, was oozing out at last. The publication of Shirley seemed to fix the conviction that the writer was an inhabitant of the district where the story was laid. And a clever Haworth man, who had somewhat risen in the world, and gone to settle in Liverpool, read the novel, and was struck with some of the names of places mentioned, and knew the dialect in which parts of it were written. He became convinced that it was the production of someone in Haworth. But he could not imagine who in that village could have written such a work except Miss Brontë. Proud of his conjecture, he divulged the suspicion… in the columns of a Liverpool paper; thus the heart of the mystery came slowly creeping out; and a visit to London, which Miss Brontë paid towards the end of the year 1849, made it distinctly known.”

2. When Eliot’s first novel, Adam Bede, made her pseudonymously famous in 1859, intense speculation arose both in London literary circles and in Eliot’s native Warwickshire, where some readers spotted possible models for characters. Meanwhile, as a biographer explains, “Authorship was claimed for a midland man called Joseph Liggins, who, although he himself never went into print on the subject, allowed others to do so without refuting the claim. The ‘Liggins business’ lasted for two years, with letters being written in The Times and the pro-Liggins faction… refusing to accept Blackwood’s public statements denying that Liggins was the author. The business of keeping her identity secret, although important to the sensitive Marian, caused her anguish, and the persistence of the Liggins myth, combined with the rumours of literary London, led her at last to admit defeat and allow it to be known, in June 1859, that George Eliot was Marian Evans.” 5

3. As for Bradley and Cooper, entrusting Robert Browning with their secret proved to be a mistake. When it became evident in 1884 that he had been gossiping about their real identity, Bradley wrote him again: “I write to you to beg you to set the critics on a wrong track. We each know that you mean good to us; & are persuaded you thought by ‘our secret’ we meant the dual authorship. The revelation of that would indeed be utter ruin to us; but the report of lady-authorship will dwarf & enfeeble our work at every turn.” But it was too late; the secret had oozed out. One of the first critics to reexamine the work of Michael Field—after Bradley and Cooper had fallen into obscurity after their deaths—hazarded a guess, in a 1921 book, that the fact of their collaboration (and, presumably, the possible erotic implications of their cohabitation) had been “obscurely repellent” to the public.6 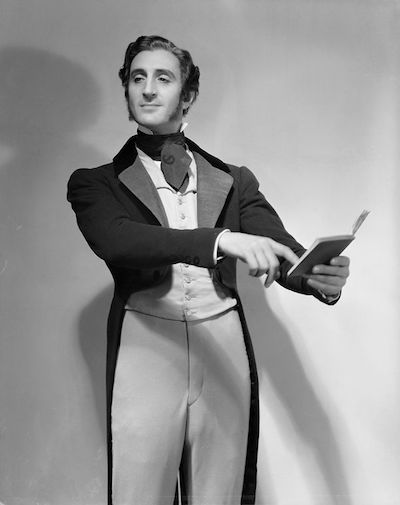 “Clever man” Robert Browning took it upon himself to reveal the identity of a pseudonymous female author. Here Browning is played by Basil Rathbone in the Empire Theater’s 1931 production of The Barretts of Wimpole Street. Photograph courtesy of Vandamm Studio / New York Public Library Digital Collections

In all of these instances of the drama, in the end the “real author” stands revealed, her chosen incognito ripped away by a male competitor. This can be variously interpreted as an act of violent and even sexualized aggression, a kind of outing; as an inevitable or even laudable uncovering of a concealed truth; as the death of a fiction that was always doomed to be temporary; or as some combination of these possibilities. In the process, literary work—initially understood as lacking a definite gender, history, or geography—is suddenly attached to an actual woman born and raised in a specific place, with these or those parents, married or not, and so on.

In some cases, the loss of the incognito did not cause lasting damage to the authorial career, or perhaps was even necessary to its eventual success. The legend of the mysterious Brontë sisters, living in their own isolated world in the Yorkshire moors, was arguably crucial to their eventual ascent to the first rank of English novelists. For Bradley and Cooper, on the other hand, the loss of their incognito may have been at least temporarily fatal: Michael Field was revealed to be not a talented new male poet, but instead a pair of eccentric “spinsters” in disguise.

As a notional author—ungendered, or with gender masked—gives way to a transformed one associated with a specific female body, so too does one body of work give way to a second one. This work is verbally identical to its predecessor, but even so, fundamentally different. In spite of this transformation, it may be that the female author, though unmasked, finally always triumphs over the male discloser. Who remembers the “clever Haworth man” or Joseph Liggins now, except as footnotes in biographies of Charlotte Brontë and George Eliot? A plausible case can also be made that incognitos are, by their nature, temporary: that they set a ticking alarm that will always eventually ring, even if we are not sure at what hour.

Even so, there is something unseemly in the discloser’s self-righteous assumption that he knows best when the mask should be removed. “You are robbing us of real criticism,” Bradley wrote Robert Browning when she and Cooper learned that he had been telling tales. “The gods learn little from the stupid words addressed to them at shrines: they disguise; meet mortals unsuspecting in the market place.”7 By spilling Bradley and Cooper’s secret, Browning had in effect killed off “Michael Field,” who had briefly enjoyed the liberty of being a fictive creation.

A suggestion for adapting this drama going forward: write out the Clever Man (or make him exit in Act I, stage right, pursued by a bear). Now we are left with a more interesting production. In this version, the incognito author remains unknown: a masked, sexless divinity exploring the world with impossible freedom.