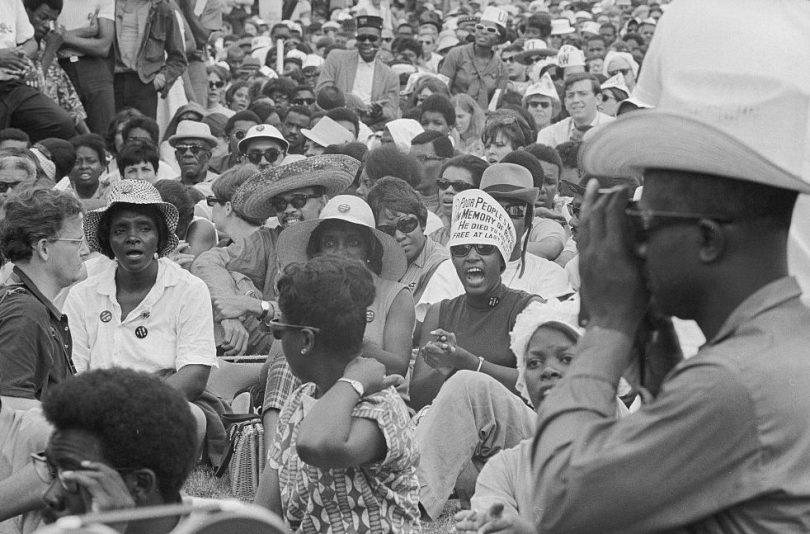 In 1968, municipal sanitation workers angered by poor wages and dangerous working conditions staged a strike and demanded official recognition of their union, the American Federation of State, County and Municipal Employees (AFSCME). To communicate their grievances and compel support for their cause, the workers carried signs as they protested that proclaimed, “I Am a Man.” As one of their leaders emphasized, although the strike was about bread-and-butter issues such as compensation, it was also a demand that garbage collectors be treated with dignity.1

To observers of the walk-out, the strikers’ signs and sentiments no doubt seemed familiar. That is because they were. The striking sanitation workers were in Baltimore, and they were walking the picket line in September 1968, five months after the assassination of Martin Luther King Jr., who had been murdered while in Memphis supporting a now-famous strike by sanitation workers in that city. To honor the slain leader and the workers he championed—and to call attention to their own circumstances—the Baltimore workers modeled their protest on the Memphis strike.

Although often recalled as a champion of individual civil rights, King, in his impassioned defense of and involvement in the Memphis sanitation workers’ strike, evinced a fierce belief in collective labor activism. As King told a Memphis audience on March 18, 1968, “Now our struggle is for genuine equality, which means economic equality … It isn’t enough to integrate lunch counters. What does it profit a man to be able to eat at an integrated lunch counter if he doesn’t have enough money to buy a hamburger?”

King’s concern with poverty and the problems of the working poor was reflected also in his ongoing efforts on behalf of the Poor People’s March, which was scheduled to take place just a few weeks after his premature death. In other words, during what should have been the middle years of his life, King’s attention was clearly focused on achieving social democratic ambitions, and his activism in furtherance of the inextricable goals of economic and racial justice serve as one of his most profound legacies in Baltimore.

Inspired by King’s bold stance on behalf of “the dignity of labor,” a cause to which many low-wage municipal employees had already dedicated themselves, sanitation workers pressed their case and ultimately won their battle for union rights. They secured collective bargaining not only for themselves but also for many of their fellow municipal employees, including some with significantly higher earnings. Unionized public-sector employment became a critical source of economic security for the large and growing number of African Americans who worked for the municipal government, most of whom were women. Union-negotiated contracts hardly transformed low-wage jobs into lucrative posts. Nevertheless, in a city undergoing debilitating deindustrialization, the public sector became a critical source of union-protected, stable employment.

King’s activism in furtherance of the inextricable goals of economic and racial justice serve as a one of his most profound legacies in Baltimore.

In February 1968, 1,300 sanitation workers in Memphis walked off the job following the deaths of two of their coworkers, who were crushed in the back of a malfunctioning garbage truck. The striking workers, all African American, demanded union recognition, improved workplace safety measures, and an increase in their wages, which were so low that many qualified for public assistance. The workers, who had been organized by Thomas Oliver “T. O.” Jones, were affiliated with AFSCME, and following some initial hesitation, the leadership of that union fully endorsed the strike. The walkout also won the support of members of the local African American middle class, including Rev. James Lawson, who invited his friend Martin Luther King to visit Memphis and meet with the striking workers.

Witnessing the sanitation workers’ determined defense of their dignity and their collective campaign to secure a decent standard of living, King found a cause he readily embraced. As he explained to the striking sanitation workers at a rally on their behalf, “It is criminal to have people working on a full-time basis and a full-time job getting part-time income.” King worried that economic injustice—full-time wages that did not lift workers out of poverty, miserly welfare allowances that trapped people in poverty, and the inadequate availability of jobs, for example—imperiled the promise of the United States and squandered the talents of its citizens.

In Memphis’ striking sanitation workers and their supporters, King identified a community taking a bold and noble stand against the problems that most threatened the nation and the world. He pledged to remain involved in the workers’ cause, and he did—until an assassin in Memphis took his life on April 4. In many cities, rebellions and uprisings followed King’s assassination. His death also prompted more organized forms of collective resistance across the nation by workers seeking union representation. In the Baltimore case, low-wage public sector employees found both inspiration in King’s support for the sanitation workers’ strike and an opportunity to advance their own ongoing efforts to secure union rights.

In Baltimore, unionization drives among public-sector workers had profoundly important implications for African Americans. Black leaders had been fighting for decades to increase African American representation in the municipal workforce and had begun meeting with some success. White flight during the 1950s and 1960s increased the significance of Black political power in municipal elections, and federal civil rights legislation banned discrimination in hiring. As a result, while during the early 1960s, only one in four city workers was Black, by the end of the decade, 50 percent of municipal workers were African American, a figure that was slightly higher than African Americans’ representation in the city’s population.2

Despite the important changes, Black workers were concentrated in low-wage positions. Additionally, much of the nation’s protective labor legislation, including the right to join a union, did not extend to most government workers. As employees of the people, government workers historically had been seen as relatively invulnerable to exploitation. During the 1960s, however, many public-sector workers in Baltimore and elsewhere increasingly felt that their interests were not taken seriously enough by elected officials. The workers demanded the right to collectively bargain over issues including wages; fringe benefits such as health insurance and sick leave; workplace safety; and bias and favoritism in hiring, promotion, and firing.

In Baltimore, African Americans played critical roles in public-sector unionization drives. In 1967, led by their president Dennis Crosby, a Black high school teacher, members of the Baltimore Teachers Union (BTU) won recognition.3 AFSCME officials, who had been organizing low-wage municipal employees in the city throughout the 1960s and bargaining unofficially on their behalf, were determined to extend union rights to their constituents. By the mid-1960s, AFSCME members included school cafeteria workers in addition to custodians, patient aides in addition to orderlies, and employees of the Department of Welfare in addition to prison guards and garbage collectors. As a result, the union had many female as well as male members and large numbers of African Americans.

Local 44, the largest AFSCME organization in the city, was led by Raymond “Ray” Clarke, an African American former chauffeur-foreman with the Bureau of Sanitation. His efforts as well as those of his fellow AFSCME leaders to secure recognition remained stymied in early 1968. The city’s new mayor, Thomas D’Alesandro III (the brother of Nancy Pelosi, the current Minority Leader of the US House of Representatives) had endorsed collective bargaining during his 1967 campaign, but union leaders faced fierce opposition in the majority white and racially conservative City Council.4 Then came the Memphis strike.

AFSCME officials from the Baltimore area made repeated trips to Memphis during the strike to support the workers and remained committed to the cause until the union finally secured recognition. When the officials returned to their city, they were primed for battle, and many sanitation workers hardly needed encouragement to take an assertive stance on their own behalf. What followed in September was a four-day strike led by garbage collectors and joined by other predominately blue-collar municipal employees. Prior to the strike, it had seemed all but inevitable that the city was going to grant municipal workers union rights. King’s stance in Memphis and subsequent death had swayed public opinion on public-sector unionization and given the cause moral legitimacy. Nevertheless, AFSCME leaders and members were not taking any chances, and their strike hastened the decision by elected officials to recognize government unions.5

In the union elections that followed, workers from multiple departments, including public works and education, chose to be represented by AFSCME, as did employees in the city’s jail and hospital. After the votes were counted, AFSCME’s membership total reached 10,000. Meanwhile, a former municipal employees’ association that declared itself a union during the strike won uncontested elections among classified workers. Teachers’ aides voted to join the BTU. Two firefighters’ unions and a professional nursing organization also became official bargaining agents for city workers. Furthermore, an AFSCME-affiliated union represented police officers.6

Unionization bolstered the status of all municipal employees. It was particularly important in African American communities, however, because of the inroads Black workers had made in the public sector and the ongoing discrimination they faced elsewhere. As the industrial sector of their city continued to decline, a significant contingent of African American workers, including a large number of women, had gained for themselves a relatively safe haven in the uncertain local labor market. King’s support for the Memphis sanitation workers had hardly been the source of public-sector labor activism in Baltimore, but it was a critical ingredient in the workers’ success in their battle for union rights.