Paris Streets, January 11, 2015
An estimated 3.7 million people rallied across France this past Sunday, January 11th. Roughly 1.6 million marchers were in Paris, where the Charlie Hebdo murders occurred. Friends report that the ... 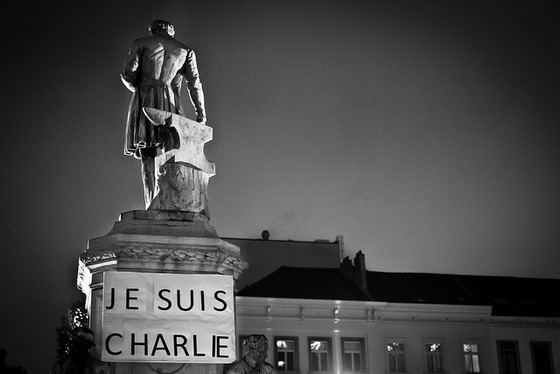 An estimated 3.7 million people rallied across France this past Sunday, January 11th. Roughly 1.6 million marchers were in Paris, where the Charlie Hebdo murders occurred. Friends report that the route was so impossibly crowded that people spread into nearby streets to create a slow river moving from Place de la Republique to Place de la Nation.

Maybe this rally was a defining moment. That will have to be determined in the future, when we’re capable of looking back with some perspective.

People were horribly murdered around the world this past week; large-scale atrocities occurred in Nigeria, the Central African Republic, and Pakistan. So the question is, what makes the targeted assassination of a handful of white male cartoonists such a global rallying point?

This question is about our belief in symbols, not about measuring the relative weight of death in the world media. Art is based on symbols. Sometimes art is disliked because it is poorly done or in poor taste or really unattractive. Perhaps you dislike a particular piece of art because it does not match your ideals or your sofa. Perhaps the art does not conform to your belief system or to your definition of what art is allowed to be. Perhaps the art looks like a happy snowman and you feel the artists are having too much fun.

Artists work with symbols. Dictators and extremists rightly fear such intangible creations because humans are susceptible to flights of fancy. We fight wars with weapons; perhaps the only thing history proves is that humanity’s most powerful weapon is the mind. And we fight minds with symbols.

How comfortable are you with political leaders setting boundaries about what is polite, considerate, or appropriate for your society? How comfortable are you with media decisions on what you are allowed to see? The targeted assassination of cartoonists is a powerful symbolic muzzling. By refusing to republish the cartoons, North American media outlets are announcing their allegiance with the religion of power—whether that position is abused by Christian, Jewish, Muslim, Hindu or Sikh leaders.

Isn’t it interesting, in the rush to march in support of “Charlie,” that the rally included such world-class press-muzzlers as Turkish Prime Minister Ahmet Davutoglu (a Turkish cartoonist is currently facing a jail term for a political drawing), Egyptian foreign minister Sameh Shoukry (three Al Jazeera journalists are currently awaiting retrial in Egypt), and Russian foreign minister Sergei Lavrov (a country where journalists are so routinely intimidated and assassinated, I cannot possibly fit the list in here). And how valuable is freedom of the press in the US when the country did not bother to send a high-ranking representative to the rally? The US was represented by its Ambassador to France, who lives in Paris.

I do not give a flying nutria tail for anyone’s religion. Belief in the gods ought to make us more spiritually generous, more willing to forgive, more open to love. Sadly, the radical Christian Right, the Jewish Defense League, ISIS, al-Qaeda, Hindu extremists and other faith-claiming fanatics everywhere prove otherwise.

Why should our media take special care in tip-toeing around religion? Fox News is allowed to offend my humanist and feminist beliefs daily with outrageous pseudo-facts. Our media rarely hesitates in broadcasting gruesome death scenes and salacious videos, both of which outrage my humanist principles.

North American media broadcast footage of the gunmen killing French police officer Ahmed Merabet outside the offices of Charlie Hebdo—with tragic repercussions for his devastated family. Our media can show any lay civilian’s death without permission and any video distributed by a terrorist, explaining so-called motives, but nasty drawings about a god or a prophet? Ah, do not cross that line.

How far have we internalized these principles of religious censorship if we feel safer when we keep our mouths shut? How safe are we, if we are silent?

If we allow this to be true, if we claim that we are being polite and decent by keeping quiet, then we are going to lose this ideological war. Rallying through the streets of Paris is a powerful symbol but it must be backed up with the freedom to speak, publish, and broadcast—a message which is frankly unpopular with several of the world leaders present at Sunday’s march.

I am a writer who works with intangible, slippery symbols every day. I know how illusive, powerful, and unpredictable they can be. I am willing to live with Fox News and with insensitive videos because I want as much diversity of opinion as possible, as many symbols as can be dreamed up. And yes, I will laugh at them. Because there is no other choice.

We need every symbol we have and every art form to speak out in our flawed and often horrifying world. Because if we lose this ideological war, imagine how impoverished we will be. Wait a moment—you won’t be able to imagine it. Because there won’t be any symbols that you will be allowed to use.