No Man Is an Island
Early on, Andy Weir’s novel The Martian—about an astronaut left to fend for himself on Mars when his team thinks he has died during a crisis—falls into a reliable pattern. Mark Watney, the team’s ... 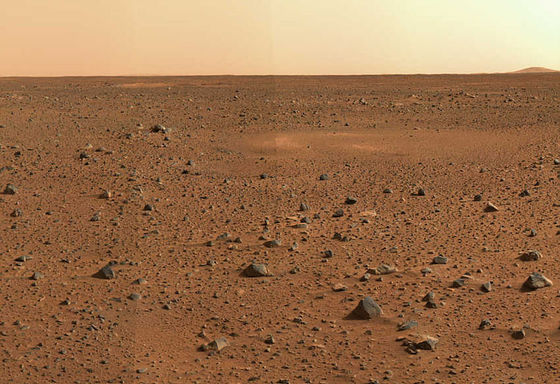 Early on, Andy Weir’s novel The Martian—about an astronaut left to fend for himself on Mars when his team thinks he has died during a crisis—falls into a reliable pattern. Mark Watney, the team’s resourceful botanist and mechanical engineer, encounters an obstacle to his continued survival; he comes up with a clever plan for surmounting that obstacle; contingency, or the nature of the plan itself, produces another problem; he surmounts the new difficulty; and so forth.

The design is as regular as clockwork: Watney responds to his limited food supply with a plan to grow potatoes in soil he creates from a mixture of Martian dirt and bacteria from his own waste. Then he realizes he needs water, and comes up with “an idiotically dangerous plan” to make it by combining oxygen he separates from the atmosphere with hydrogen he extracts from rocket fuel. The plan is hazardous because he must mix the oxygen and the hydrogen by burning the latter, but he must do so slowly enough not to create a giant explosion. He succeeds, but the process leaves unburned hydrogen in the air, turning his bubble habitat into “a bomb.” He decides to evacuate the oxygen from the habitat so he can burn off the hydrogen “in controlled bursts” using a portable oxygen source. But then he must deal with the fact that removing his habitat’s atmosphere will kill the bacteria in his potato-growing soil. And so on.

Watney’s detailed description of his problem-solving process makes up a large portion of the novel, especially in its early chapters. While comparisons of Weir’s book to Daniel Defoe’s 1719 Robinson Crusoe are both obvious and apt, it is also no surprise to learn that Weir works as a software engineer, since the bulk of his novel reads like a narrative translation of the experience of coding.

Far from being boring, this narrative structure is, I’d venture to guess, largely responsible for the breakout success of Weir’s initially self-published book. Anyone who thinks repetition is inherently inimical to reader appreciation is not familiar with the way Ayn Rand continually reproduces the same basic episode over hundreds of pages and multiple novels. In Weir’s case, the repetition offers a vicarious experience of unalienated, progressive work that is totally distinct from the kinds of boring, unproductive labor that most people do for a living. Watney notes in a log entry that appears just before his page-turner of a final rescue that while stranded on Mars he has spent his time as a farmer, then “a trucker, doing a long haul across the world,” and then a construction worker, “rebuilding a ship in ways no one ever considered before this. I’ve done a little of everything here, because I’m the only one around to do it.”

If this were all that the novel offered, it would be easy to dismiss it as a well-wrought piece of more or less libertarian propaganda along the lines of Rand’s books. This is what the world is like, it would say: a resourceful individual encounters problems, and he solves them, even or especially if there is no one else for him to rely on. And indeed, we might expect the private tech industry—whose employees remain relatively well-paid, and who do a kind of work that privileges isolated feats of innovation over consideration of their aggregate social impact—to serve as a hotbed for this sort of ideology. But Weir, to his credit, not only acknowledges but also embraces the contradiction between Watney’s can-do individualism and the fact that, as an astronaut, Watney has gotten to Mars because of, and can only be rescued by, government-funded organizations like NASA that are geared towards achieving goals other than profit.

The existence of an organization not beholden to capitalism is in fact what makes The Martian a work of science fiction: in the real world, NASA recently announced that “[a]s part of [its] continuing effort to open low-Earth orbit to commercial space opportunities, [it] is seeking feedback on ways it can help create greater access to and use of the International Space Station for research and commercial activities.”1 Weir, by contrast, gives us a world in which government-funded organizations still mount purely scientific expeditions to other planets, and partway into the novel he begins alternating the scenes involving Watney with others devoted to the terrestrial workplaces that make such expeditions possible. At the beginning of his sixth chapter, Weir switches from first to third person and introduces Venkat Kapoor, the first of the various employees of NASA, the Jet Propulsion Laboratory, and the China National Space Administration who will cooperate across organizations and even nations on a plan to rescue Watney.

These scenes provide the pretext for some predictable jabs at bureaucracy: as delighted as Watney is when he temporarily reestablishes contact with his fellow humans, he also quickly grows tired of having to verify his plans with “a committee of faceless bureaucrats back on earth.” But they also show groups of people working, like the isolated Watney, to solve problems and bring him home. And lying in the novel’s background is the fact that these people were already responsible for the massive material and organizational effort required to get Watney and his international team to Mars in the first place.

In Weir’s case, the repetition offers a vicarious experience of unalienated, progressive work that is totally distinct from the kinds of boring, unproductive labor that most people do for a living.

We might take the fact that these space agency employees face obstacles that Watney doesn’t, including sometimes obstructions posed by their own colleagues, as a mark of realism—we don’t have to romanticize organizations to believe that they can achieve things. Indeed, this realism provides some necessary leaven to The Martian’s now sadly utopian-seeming premise that NASA might mount multiple manned missions to Mars for no other purpose than disinterested exploration. Weir is clear, for instance, that his space agencies suffer constant budget constraints. When a US booster blows up because it has not been thoroughly inspected, China steps in with its own equipment—all the more heroically since, despite NASA’s promise to include a Chinese astronaut in a future mission, the Chinese agency offers its aid knowing that it is scrapping a hard-won mission that will likely not be funded again. And the plans to rescue Watney only proceed because a shrewd NASA PR rep—prickly, but no villain—makes use of the cable news cycle’s fascination with Watney’s story to drum up support.

The Martian offers on its final page a paean, in Watney’s voice, not to individual ingenuity but to people’s “basic instinct to help each other out”:

If a hiker gets lost in the mountains, people will coordinate a search. If a train crashes, people will line up to give blood. If an earthquake levels a city, people all over the world will send emergency supplies. This is so fundamentally human that it’s found in every culture without exception. Yes, there are assholes who just don’t care, but they’re massively outnumbered by the people who do. And because of that, I had billions of people on my side.

One might argue that the language of crisis here actually hints at a far more interesting question that The Martian can only raise implicitly: how do societies organize large-scale cooperative projects without either profit or crisis as a motivating factor? How does one organize an expedition to another world, or any other extensive project that does not produce an immediate profit for investors? A crisis is arguably indispensable to a gripping work of genre fiction. But it can’t provide a lasting basis for the different (and arguably much more pressing) fiction that we used to call “the common good.”

Featured image: The surface of Mars from the Spirit rover. Wikimedia Commons